Modi and the Politics of Trust

The normalisation of Hindu nationalism 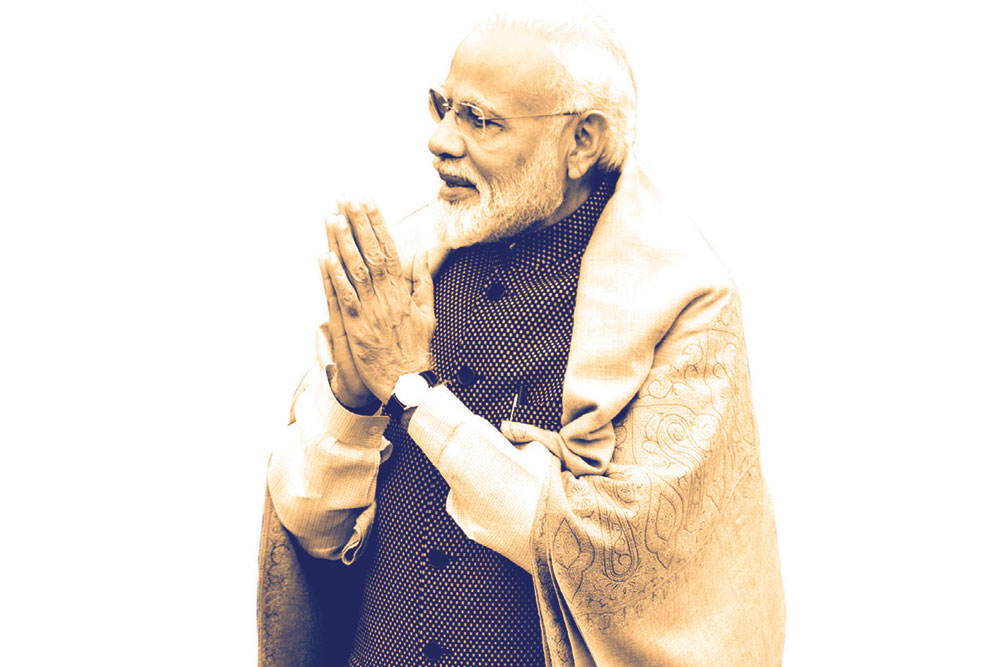 
In politics it’s the conviction of the present that gives the future its name. The present is a stage for constant reinvention for those types of politicians who see adversity as a curse. They withdraw from it, leaving behind the shards of slogans that once defined them. They are here as transition figures made winners by the error of others than by the ideas of their own. Politics is a performance of derision when they dominate the arena, and they still do. Politics is a play of conviction when redefinitions are formed, and arguments are rephrased, in the shared but suppressed vocabulary of a people. It is when change is an organic process, the only inevitability of conviction politics. Modi has become democracy’s most popular pronoun of such change because it’s the strength of his conviction rather than the much-analysed flaws and fragility of his adversaries that powers him.

He has not shifted from the argument since the summer of 2014, a time when, if it were not for his presence, it could have been a combat between politics as usual, or the entitlement of family inheritance, and politics as exhaustion and defeatism, or the aggrieved Right without a face. It was a time when the passions of one man aligned with the aspirations of an entire nation. To keep that balance was to break politics free from the cosy certainties of the left-liberal establishment that claimed copyright over national character. Every election Modi fought and won was a struggle to maintain that equilibrium, and he did so by not deviating from the original text of the outsider. In power he may be the strongman of the East with the mandate of democracy, but he still sees himself as the outsider who remains incomprehensible to those who block reality by rejecting the cultural shift that made him possible. Power as a permanent campaign for the future made every election a daring and a validation; it was not the so-called BJP machine or the grassroots wizards that made the craft of winning look so natural. It was the restoration of trust in politics by the power of conviction.

It was the project of national redefinition. He did not borrow from the playbook of populism, even though there is a surfeit of comparative literature that puts him in the company of the Putins and the Erdogans. It’s not by subordinating the institutions of civil society or silencing dissent that he has made the project a repudiation as well as renewal. Repudiation because he stood by his belief that the India he wanted to win was trapped in the artificialities of the Congress age in which ‘the nation’ was a taboo and ‘secularism’ was state-imposed sanctimony. He raged against the false inheritance. Renewal because what he believed to be Indianness was waiting to be set free. He undertook the project not by restricting the natural impulses of democracy but by capitalising on them. We are still naming the change; he has not finished yet.


Every movement is born in the mind of the one who dared to put moral conviction against political entitlement. It can be sustained only by making arguments for freedom less combative and more inclusive. The man who began it all has already shown, by the relentlessness of his conviction, that the modernisation project of the Hindu nationalist can do without outcasts and guidelines on national behaviour

What India is experiencing today is as culturally transformative as what it was going through after independence. Then: Managing freedom meant building on it a new India, and its architecture reflected the ideological refinement of the nation builder. For Nehru, the India that emerged out of colonialism required the best of what ideologies could offer, and he, a cultural sophisticate, found them in ideologies which had intellectual clarity about the future. The modern state would be shaped by the industrial vision of the Soviet model with a dash of controlled capitalism, and its inhabitants would be assembled, with the precision of an enlightened Frankenstein, from raw material collected from such lofty ideals as secularism and scientific temper, unsullied by instincts of national identity or religious primordialism. Today: In the grand project of Nation (Re)building, modernity would not be a rejection of traditions that formed the national identity, which didn’t die under colonialism, Mughal or British. It was waiting for the trapdoors to open. The nation is back with a vengeance, and it seems the secular self can exist in perfect harmony with the original impulses of religion. It doesn’t mean that the nation (re)builder needs to travel back to mythology to discover his cultural ancestry. The future is not a religious Ruritania either.

Religious nationalism is mainstream in Modi’s India, and to make it look the natural, effortless identity of India is the most ambitious political project of our time. It is about rebuilding India on the fast-falling edifice of Nehru’s modernity. It is about turning the aggrieved Hindu into the empowered Hindu; still, it is not about making a Hindu Republic. This distinction is important to Modi’s national project: an expression of the Hindu self does not necessarily mean the creation of enemies; it should sound as inoffensive as Christendom. Modi himself does not make a rhetorical Hindu nation of religious absolutism in his stump speeches or in his conversation with Indians. He makes the perfect context for the politically armed Hindu to play out his nationalism. Modi may want it not as an imposition—borrowing from the book of the official secularist—but as a cultural homecoming. It is the catalyst’s credo. His dignity—and the sophistication of being in power without the restraints of paranoia—is not shared by the base. It is the aesthetics of the Hindu Reawakening that mars the show occasionally.

The show of religious nationalism does not look archaic in India today. Modi in power has normalised it without a communal or cultural division of India. He has made it compatible with modernity—if modernity is not a rejection of civilisational memories. The verdict in Uttar Pradesh has shown how far India has travelled on the road to Hindu nationalism. Yogi Adityanath may not be the future, but he captures the spirit of the present: mobilisation of the redefined national identity, and its further normalisation. Adityanath is not the raw edge of the new cultural order; he is a vindication of how comfortable India has become in its political expressions with a pronounced religious accent. The interlocutors of the nation are made possible by the wider, grassroots acceptance of the national redefinition project. A monk in saffron robes, with a captive political base, as the chief minister of India’s most influential state is not an anomaly but the inevitability in Modi’s India. In the many synonyms of change, the ascending monk stands out because he personifies the argument against Nehru’s secular construct. He is the starkest legacy of the Modi movement.

Every movement is born in the mind of the one who dared to put moral conviction against political entitlement. It can be sustained only by making arguments for freedom less combative and more inclusive. The man who began it all has already shown, by the relentlessness of his conviction, that the modernisation project of the Hindu nationalist can do without outcasts and guidelines on national behaviour. At times, he seems to be all alone in this project. He has India’s trust.