And the uses of minimalist government 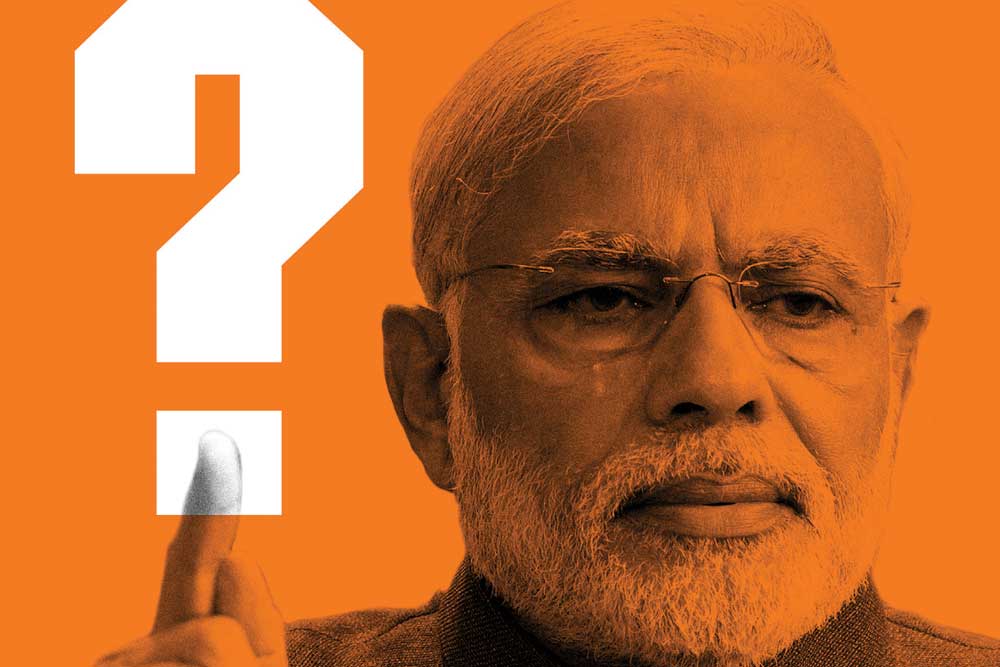 IN 2014 WHEN Narendra Modi stormed into the office of the Prime Minister of India as leader of the first single-party majority in three decades, it seemed certain that ‘minimum government, maximum governance’ would be the top priority or guiding philosophy of his new government. Five years later, in the final Budget of his administration, it features at No 10 in a ten-point ‘Vision for 2030’. There may be some solace in the fact that it hasn’t completely dropped off the list of priorities. There may be some disappointment that it is now accompanied with specificity—making bureaucracy proactive, responsible and friendly, and scaling up electronic governance—which limits its ambition and scope. There may be dismay that not one public sector enterprise, not even the terminally sick Air India, changed ownership.

The economic reality of India is this: any government which wants to lead India to become a $10-trillion economy in the next 15 years (a decade is perhaps too ambitious) will have to grudgingly, or otherwise, accept that the government must do less of several things (minimum government) while performing some limited functions efficiently (maximum governance). It can be argued that Modi’s Government has leaned in the right direction even if speed and consistency have been missing.

Consider the second first: maximum governance. To the end of bringing greater transparency and efficiency to the functioning of government, the Prime Minister has made great strides. His early adoption of Aadhaar, which ironically was disowned by the Government which conceived it, and aggressive rollout of the Jan Dhan Yojana laid the foundation for the only efficient way to run government benefit schemes— via direct cash transfers. India’s incredible mobile and data revolution driven by the private sector (not interfered with by the Government) completed the ‘JAM trinity’. In this Budget, the announcement of an income support scheme for farmers is radical not for the amount it will transfer, but for the fact that it reiterates the Government’s commitment to direct cash transfers (and the JAM trinity) and because it at last recognises that price interventions may not be the most appropriate way for the Government to support any distressed section of society. Those have serious efficiency consequences for the rest of the economy, which cash transfers do not.

There is a second dimension to making government more efficient. Previously, the implementation of big government schemes was rarely monitored for outcomes. Now, with the use of technology and quarterly reviews, the Government has a grip on what outcomes are being generated by its spending. Also, ministries are now set clear output targets which they must achieve within a given timeframe. The positive effects have been seen in schemes ranging from Swachh Bharat to Electricity for All.

The third dimension of maximum governance is the reimagining of federalism. In India’s over-centralised polity, we often forget that the country has 29 state governments which have an equal role to play with the Union in delivering governance. In any case, Delhi cannot enforce one-size-fits-all policies to transform such a diverse country. The devolution of extra finances to states and the rationalisation of Centrally -sponsored schemes have given states more autonomy to address their own requirements. The Union’s role is more to create a sense of competition among states so that there is a ‘race to the top’. Indices, which rank states on the ease of doing business, health, education and water, have already begun to spur maximum governance in every state capital. The logical extension of this spirit of competition is at the local government level. India has more than 700 districts whose administrations are at the cutting-edge of service delivery. These too need to be engaged in a race to the top. In a limited way, the 115 Aspirational Districts Programme, which targets the most backward districts of India, has already begun to do this in education, health, agriculture, basic infrastructure, financial inclusion and skills. Incredibly, this is a flagship government scheme which has no finances allocated. Its task is to ensure better convergence and use of existing government schemes: no maximum government, but maximum governance.

While an efficient government is crucial for growth, it cannot drive growth the way entrepreneurs can. It was hoped that Modi’s Government would rid India of the last vestiges of the old licence-raj era and unleash the economy to grow to its full potential. On this score, the Government has progressed decidedly slowly.

There are two plausible reasons which may explain this. First, Modi was boxed into a corner by Rahul Gandhi’s ‘Suit- Boot-ki-Sarkar’ jibe when he tried to amend a draconian land acquisition law early in his term. It was a tacit admission that India’s political economy was not ready for pro- market reforms and Modi was not going to have his hand forced. Second, it would have been difficult to be aggressive with market reforms in a context where crony capitalism had ruled the roost and the public was deeply sceptical about the intent of capitalists. A free market has no legitimacy if people think it is unfair and rigged to favour a few.

A future Modi government, should it win a second term, must put administrative reform at the top of its agenda

The second explanation is more persuasive. Why? Because all the big-ticket economic policy announcements made by the Modi Government in the course of the last five years address precisely that problem. The first of these was Demonetisation. It is not a textbook measure and it was always bound to hurt the economy in the short run, but it was still announced and implemented because it sent a very clear signal that the Government was determined to clamp down on those who had earned their money either through illegal means or by evading tax. Given that previous governments paid lip service to corruption, cronyism and black money, but did no more, this was a credibility-booster for the Modi regime. That its implementation was botched in parts and that the system proved so utterly corrupt in laundering the money back are not indictments of the intent. The Goods and Services Tax was another tough measure, not just because it required the Centre to negotiate with states, but also because it forced large parts of the non-tax-paying populace to enter the tax net. It also helped in the formalisation of the economy and aided those vulnerable workers who were exploited by businesses in the informal sector through a denial of benefits and security. Between Demonetisation and GST, India’s abysmal tax-GDP ratio has been given a boost, which is important for the legitimacy of the entire system.

The third equally important reform was the Bankruptcy law. For the first time, capitalists who had run their businesses aground would lose control of their empires. Until then, almost all succeeded in living to fight another day because no system of order existed. Banks and creditors were simply not able to claim any of their dues in the absence of a bankruptcy law. One of the fundamental conditions for capitalism to succeed is to have an orderly system of exit for firms which have failed. Those entrepreneurs who were honest and failed because of genuine mistakes would have a chance to start again. Those who siphoned off money from their enterprises have to lose their business, their wealth and possibly go to prison.

Given India’s history and habit of poor implementation, none of these big-ticket economic reforms—Demonetisation, GST or Bankruptcy law—has been executed spotlessly. That has taken away some of their sheen. But, over time, these very reforms will be responsible for Modi, or some successor, to actually push the minimum government agenda of free markets more aggressively. If people believe that the system is fair and transparent, there will be greater trust in the Government when it sells PSUs, for example, or when it gives out natural resources, including land, for use by the private sector.

The one big miss of the Modi Government in the pursuit of the ‘minimum government, maximum governance’ agenda is the subtext of point No 10 in its ‘Vision for 2030’: ‘A proactive, responsible and friendly bureaucracy.’ An entrenched permanent bureaucracy is the antithesis of both a maximum governance and minimum government agenda. The Modi Government made only a half-hearted move for the lateral entry of bureaucrats whereas what the bureaucracy needs is a massive dose of competition. In the absence of the right incentives and disincentives, the Indian Administrative Service and associated civil services are not likely to deliver a $10-trillion economy in a hurry. A future Modi Government, should it win a second term, must put administrative reform at the top of its agenda. So, in fact, should any other government if it wishes to be transformative.

Perhaps the more appropriate slogan for India is ‘maximum governance, minimum government’. Until the State is trusted by the public for its transparency and efficiency, it will not find it easy to let the private sector enter ‘occupied’ or ‘controlled’ territory. The low-hanging fruit on ease of doing business may be plucked, but tough reforms on disinvestment, land, labour and banking will not happen as long as corruption and cronyism lurk in the surroundings. Without tough reforms, it is impossible for India to become a $10-trillion economy in the next decade-and-a-half. And aspirational India wants the maximum, not minimum. 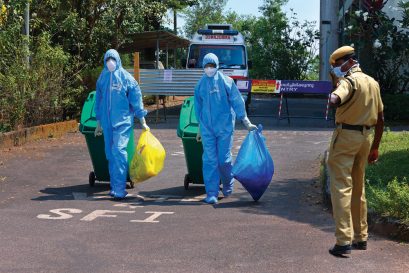 Even if the human toll of the Coronavirus is contained, the economic disruption in India could soon be substantial

The Ways of the Coronavirus 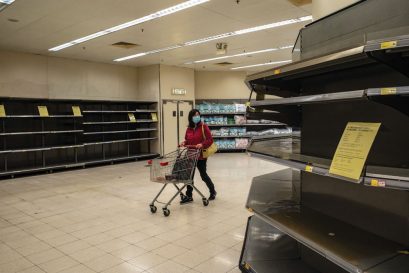