Kamala Harris is fierce, confident, a role model for women of colour and a trailblazer who hasn’t stopped blazing 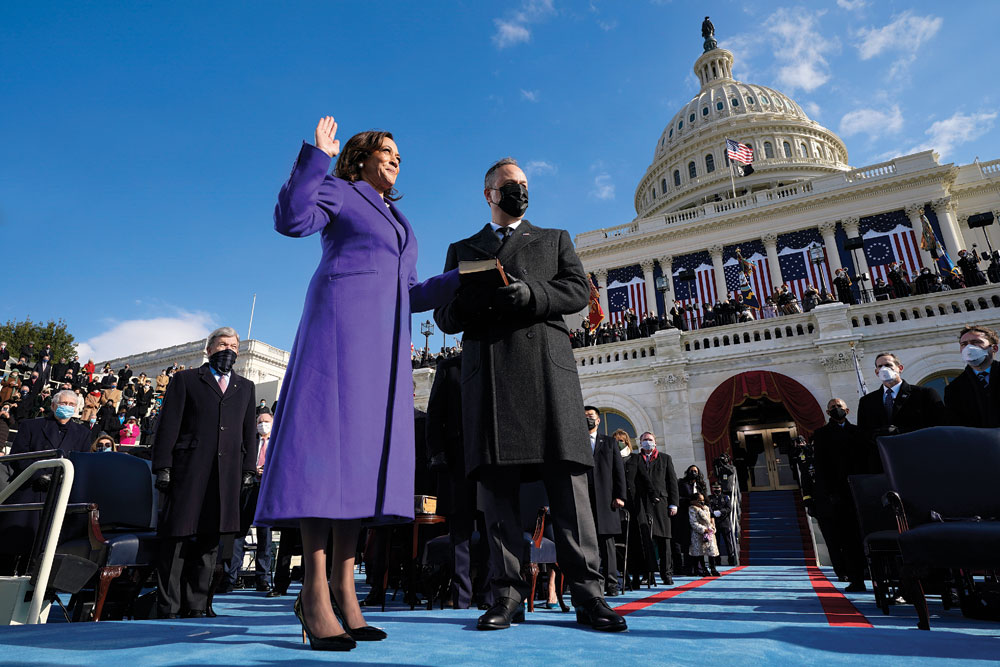 Kamala Harris being sworn in as vice president at the US Capitol in Washington, January 20 (Photo: Getty Images)


IT WAS the early ’60s. John F Kennedy had been assassinated, the Vietnam War was becoming deadly serious and Americans were losing lives defending a corrupt regime. Student anger was boiling over, nowhere more so than at the University of California at Berkeley. Meghnad Desai, then a researcher, remembers befriending a bright young economist from then British Jamaica, Donald Harris, and his equally sharp and fiery wife Shyamala Gopalan. He recalls little Kamala Devi and her sister Maya Lakshmi. “They were being raised to be Black girls,” he says.

Aretha Franklin playing on the gramophone; Sunday Mass at the African American 23rd Avenue Church of God in Oakland; the historically Black Howard University, Washington DC, for graduation. There is little to suggest Kamala Devi Harris’ Indian heritage other than her great and often expressed regard for mother Shyamala, who came to Berkeley as a 19-year-old from Chennai to study nutrition and endocrinology. She would go on to work on progesterone receptogene stimulating advances in breast cancer research.

Filmmaker Mira Nair says Harris could well be the cinematic child of Demetrius and Mina in Mississippi Masala, a romantic drama she directed in 1991. Denzel Washington played Demetrius, a young Black man who’s never been out of Mississippi, and Sarita Choudhury was Mina, an Indian via Nairobi and London, who’d never been to India, but is raised as one. Mina calls herself mixed masala, but it’s not the identity her mother chose for Harris. Shyamala kept her daughters connected through regular visits back home but there was no question in her mind that they were Black, much as Barack Obama, the son of a Kenyan father and white American mother, chose to be identified as Black.

Perhaps it was the era of civil rights with its focus on Black consciousness that inspired Shyamala, or the belief that a confused sense of heritage would be a disadvantage. Though her parents divorced when she was seven and Donald Harris went on to become professor emeritus of economics at Stanford, Harris has embraced her structured African Americanness, making it part of her legal practice and political career. Her appointment as vice president of the US has been hailed as a milestone for Indian/South Asian Americans, African Americans, and women of colour generally. But this cannot be just about identity, says UC Davis Professor Sunaina Maira. For example, her record as attorney general in California is marked by controversy that she did not use her power as “top cop” prosecutor to investigate police misconduct enough, at a time when outrage over police killings of Black and brown Americans has been rising.

Indian diplomat Meera Shankar says Harris was Attorney General for California when she was Ambassador to the US. “I met her at a Conference of Governors and State officials. She built a reputation as being tough on crime and was seen as smart, capable and as having prosecutorial ability which was also displayed during her questioning of key Trump officials in the US Senate,” she says. As a Senator she focused on reform of the criminal justice system and race relations. Shankar expects that these are going to be the key areas where she will focus her energy, though she will obviously be in on all policy decisions.

Ultimately, says Maira, as America witnessed during the Obama years, it is not just racial background that guarantees policies based on racial justice. “It is not enough to occupy seats of power as an Indian/Black woman but to wield that power against entrenched systems of oppression. So it remains to be seen what Harris will actually bring to a centrist Democratic leadership under Joe Biden,” adds Maira.


That in itself has been a matter of controversy with some conspiracy theorists among the Republicans suggesting that she, with her supposed radical, left-wing agenda, will hijack the presidency. Biden has positioned himself as a transition candidate, further fuelling this point of view. Biden sees himself as a bridge to a new generation of leaders not merely in his administration but a more multicultural and diverse America, which is less white, less Protestant and less defined by organised religion.

Harris embodies much of this change. Though her mother was Hindu, Harris was a regular churchgoer, even singing in the choir with her sister. She identifies herself as Baptist and is a member of the Third Baptist Church of San Francisco. She has been married, since 2014, to Los Angeles attorney Douglas Emhoff, a Jewish man from Brooklyn. Her ascendancy marks many firsts for many political minorities in America: women, African Americans and Asian Americans. It is not something that gives diasporic Indians unalloyed joy. As author Gyan Prakash has noted, her half-Blackness prevents them from claiming her as their own, especially when it comes to her left-of-centre politics. They would rather rally behind Nikki Haley, former South Carolina governor, even if she converted to Christianity from Sikhism.

Before creating history as the first woman vice president, Harris was the junior Senator from California and even before that, the state’s attorney general. She has consistently put her weight behind progressive legislation, whether it was creating a Hate Crimes Unit focussed on schools when she was district attorney, San Francisco, or initiating the Mortgage Fraud Strike Force to battle the 2010 foreclosure crisis as attorney general of California. That was the time she became close to Beau, Joe Biden’s son, who was then attorney general of Delaware, and died tragically of brain cancer in 2015. In her autobiography, The Truths We Hold: An American Journey, Harris has written how Beau stood by her at a time of incredible pressure from banks. It was the foundation of a firm, though sadly short, friendship.

Harris is used to being the most powerful woman in the room and has no discomfort with that culturally or socially. As she once told students at Howard University: “You can do anything and you can do everything.” It is this confidence that made her bid for the Democratic presidential nominee after a mere two years in the Senate, the highlight of which was her firm but sardonic questioning of Brett Kavanaugh during the Supreme Court confirmation hearings. She has been loud and clear in calling out sexism during Senate hearings, and has piloted or worked on legislation ranging from making lynching a hate crime to a workplace harassment bill.
America has historically been uncomfortable with women in positions of power. Since 1776, there have been only two female vice presidential hopefuls, Geraldine Ferraro and Sarah Palin, and merely one presidential nominee, Hillary Clinton—and one enormously funny fictional Veep, Selina Meyer, played by Julia Louis-Dreyfus. No surprises then that there has been much scrambling to find the most appropriate term for husband Doug Emhoff (second gentleman) and curiosity about a man happy to be addressed as Mr Kamala Harris. She is stepmother to his two children and is delighted to be addressed by them as ‘Momala’.

The Trump era has been replete with misogyny, led by a president who has only a nodding acquaintance with contemporary engagement with modern women. Already the House of Representatives has 27 new Congresswomen this year, bringing the total number of women serving to a record 118. This extension of the Pantsuit Nation (the private Facebook group and Twitter hashtag used to rally Clinton during her 2016 presidential campaign) is represented by women of fierce beliefs and uncompromising opinions, such as Alexandria Ocasio-Cortez and Ilhan Omar. In a world where you cannot be what you cannot see, such numbers are empowering.

So far, even when her stand on issues such as death penalty and life imprisonment with parole has been questioned, she has been unflinching under the pressure of scrutiny. Now that she is a heartbeat away from the presidency, that will amplify. Everything she does, says or even wears, will be up for discussion. She got a quick taste of it recently when she shot for the cover of Vogue, which used a casual photo of hers dressed in a casual pant suit and her favourite Chuck Taylor Converse sneakers. There was elation too when she wore her trademark Alpha Kappa Alpha pearls at the inauguration marking her pride in being part of the country’s first African American sorority.

Harris is a complex mix of races, religions and identities. From being part of the second class to integrate Berkeley’s classrooms when she began school in 1969, to living through her parents’ bitter divorce, to not being allowed to play with predominantly white children when she and Maya went to visit her father in Palo Alto, to walking on the Marina Beach in Chennai with her grandfather, she carries with her every slight, every victory, every pain, every joy.

Harris has promised to work towards unifying America with the 3.00AM agenda. It’s the idea that all Americans are kept awake at night by one thing: How can I get a job, keep a job, pay the bills by the end of the month, ensure my children have a decent education and an opportunity to succeed, especially during Covid? How can I buy a home and keep my home?

Nothing else matters, certainly not whether Kamala Devi Harris is more brown, or more Black. Just that, as she told Indian-American actress Mindy Kaling on their dosa-cooking video, not to call her aunty.