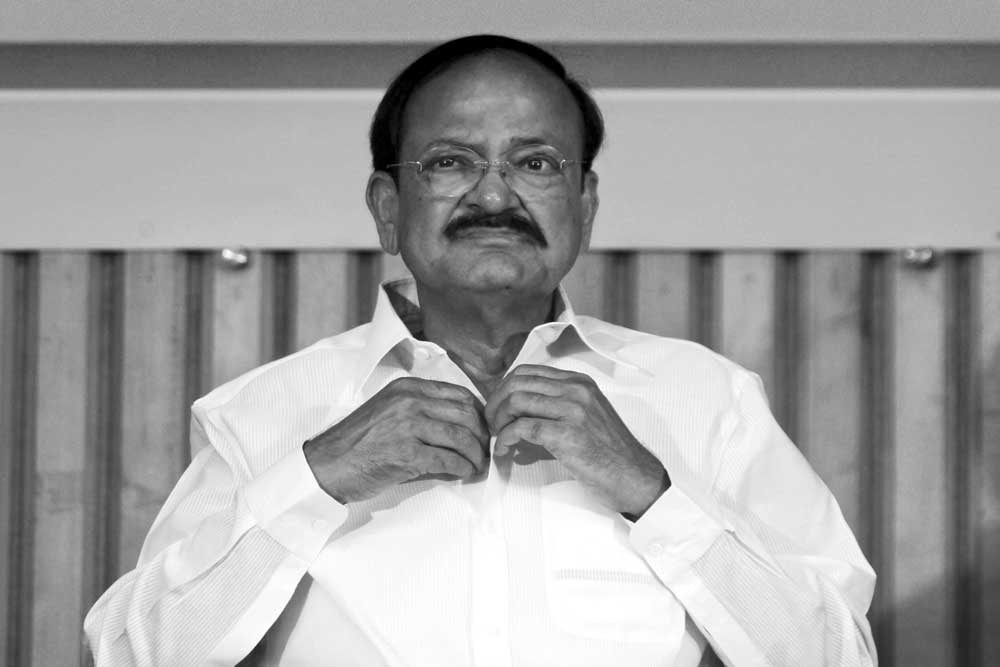 ON THE EVENING OF July 18th, Muppavarapu Venkaiah Naidu received a call from Mohan Bhagwat, the RSS chief, who was in Kashmir at the time. It had been an emotional day for the 68-year-old parliamentarian. He had wept before his colleagues after formally stepping down from all political positions, including his primary membership of the BJP. For someone who had lost his biological mother at the age of 18 months in an attack by a buffalo, Naidu had been associated with the RSS for the past 49 years and had often said that it was the Sangh that had mothered him since childhood and groomed him into a full-fledged politician. The snapping of the umbilical cord was only a formality expected of a man who would be the Vice-President of the country, but Naidu, he of the large heart, fought back tears earlier in the day at the parliamentary party meeting of the BJP and appeared inconsolable as his peers gently urged him to cheer up.

Bhagwat congratulated him on the new role that awaits him after an election the result of which is a foregone conclusion: as the next Rajya Sabha chairman. “I always feel elated after speaking with Bhagwatji,” Naidu said after he hung up and sat back in his living room with a smile. Outside, a large number of people had thronged his 30 Abdul Kalam Road home to offer their greetings to the Nellore-born leader from Andhra Pradesh who had vowed to take up sanyas after seeing to it that Prime Minister Narendra Modi got re-elected in 2019. “I wanted to work for a few more years assisting Modiji and then take up public service,” says Naidu, who, until July 17th, had held the twin Cabinet portfolios of Urban Development and Information and Broadcasting. As Parliamentary Affairs Minister until last July, he had made great efforts to bridge seemingly irreconcilable differences with the opposition. He was the one who persuaded a reluctant Mallikarjun Kharge of the Congress to break the ice with Prime Minister Modi amid much uproar in November of 2015 when both the Houses saw slugfests among members, disruptions and a resultant logjam.

Naidu’s appeal among opposition leaders cuts both ways. While one senior Congress leader calls him a “good candidate who can be expected to be fair and reasonable”, Mani Sankar Aiyar isn’t exactly enamoured of him. “I see him as someone in the RSS mould and not in the Vajpayee genre,” he states. A few other opposition leaders Open spoke to contend that notwithstanding Naidu’s endearing and simple ways, they would vote for their candidate, Gopal Krishna Gandhi, grandson of Mahatma Gandhi.

Without doubt, Naidu has friends across the political spectrum despite being a committed RSS man. Both the ruling parties of Andhra Pradesh and Telangana—Telugu Desam Party and Telangana Rashtra Samiti—have announced their support for him, much more vigorously than they did for NDA’s choice for President of India, Ram Nath Kovind. “It is true that people of these two states feel proud of anyone from here occupying a crucial post in the national scheme of things, no matter which party he or she belongs to. This is true of all leaders, including PV Narasimnha Rao and Neelam Sanjiva Reddy,” says a Congress leader based in Delhi. A CPM leader from Andhra Pradesh recalls Naidu as “a charming, energetic young man” who never held a personal grudge against Marxists, though “fist fights between the ABVP and Marxists were a common occurrence” in many parts of the state back then, especially in Vijayawada, one of Naidu’s early political turfs. The dhoti– clad Naidu himself recalls such “incidents” with a childlike guffaw.

In a state where firebrand young leaders often joined the ranks of the Marxists or the Congress, Naidu was a political oddball to start with. He loved playing kabaddi and attending RSS shakhas twice a day where he received physical training. An avowed non- vegetarian, he had no difficulty in melding into an organisation typically known for vegetarianism. He would argue with whoever questioned the RSS’s alleged dietary stance, saying the organisation only promoted vegetarian food as it was too cash-strapped to run two kitchens for its pracharaks, one vegetarian and another non-vegetarian. “This was what I was told by my seniors. I was told to stay non-vegetarian if I could afford it,” says Naidu.

EVEN AFTER HE became a regular in Delhi in the early 1990s, he often stayed with friends while other BJP office-bearers stayed and dined at the party’s Ashoka Road office. Until he became president of the BJP at the Goa conclave in 2002, he made it a point to travel widely while stationed in Delhi. The decision to name Naidu to the top post of the party was taken aboard a flight in early April 2002 that carried among others then Prime Minister AB Vajpayee and LK Advani to Goa for the national executive meet. Incidentally, it was at this conclave that the party decided not to accept Narendra Modi’s offer of resignation as Chief Minister over that year’s Gujarat riots. Venkaiah was re-elected BJP President in 2004 but resigned following the reversal at the hustings the same year.

Naidu is known for his lavish parties for which fish used to be flown down from Visakhapatnam. Many journalists and politicians fondly remember such evenings from the time he was Rural Affairs Minister in the Vajpayee Government from 2000 to 2002. At one such party, he credited his wife for all the preparations that went behind it. Lately, he has been on a diet, but derives pleasure from having others fed well. “My daughter told me some years ago that I have eaten enough for a lifetime and that I should restrict my intake. I comply completely with her orders,” he says.

Naidu has also made a mark as a leader with a good sense of humour. He has earned a name for himself with his alliterations and seemingly impromptu wisecracks and loaded acronyms (such as ‘Modifier of Developing India’ for Modi). The young BJP stalwart who went to jail during the Emergency later became an MLA twice in Andhra Pradesh and Rajya Sabha member multiple times. For a man who joined the Bharatiya Jana Sangh, the earlier avatar of the BJP, at a time when there was hardly any flicker of hope for such forces south of the Vindhyas, Naidu stood to gain whenever the party embarked on a mission to expand to southern India and rid itself of its cow-belt party image. With the BJP solidifying its efforts to firm up its position in the south, he has, yet again, become a symbol. Still young at heart and an avid badminton player, he is ready to play the part, he affirms. And if one looks at the pattern of vice-presidents who went on to become presidents, Naidu may not be able to take sanyas anytime soon.