How do we broaden the tax net? How do we jump-start strategic disinvestment? How do we rationalise existing welfare programmes to accommodate cash transfers? 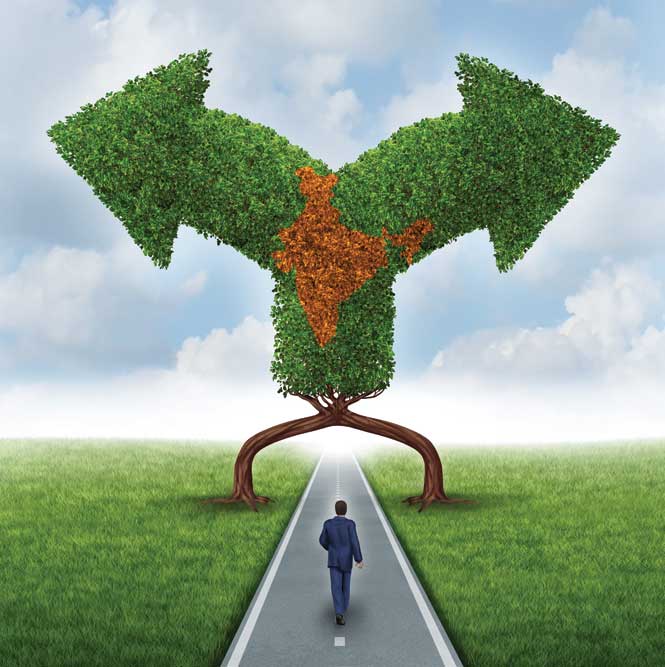 RARELY HAS AN Indian Budget been as anticipated as this year’s was. In fact, the interest this year was particularly surprising, given that it’s an election year. Election years typically witness only an ‘interim’ Budget in February, with a full Budget presented by the new administration in July.

We believe the interest stemmed from the macro-economic backdrop. The high-frequency data suggest, contrary to expectations, that India’s growth is holding up, and should be helped further by a fall in crude prices and easier monetary conditions since last October, as well as the fact that banks have stepped in quickly to fill in much of the void left by non-banking financial companies (NBFCs). That said, there are clear pockets of stress. The sustained fall in food inflation—relative to non-food inflation— has meant that farmers (who sell food to consume non-food goods and services) have been confronted with progressively worsening ‘terms of trade’, leading to prolonged agrarian distress in recent years. In addition, small and medium enterprises, which have had a chronic viability problem on account of their uneconomic scale in recent years, continue to be under pressure. The fact that both these sectors are labour- intensive simply ups the ante for policymakers.

With almost half the states in the country announcing some kind of agrarian relief in the last two years—largely in the form of loan waivers, but increasingly in the form of cash transfers (Telangana and Odisha)—the Centre was under pressure to announce some sort of ‘agricultural package’. The challenge, however, was lack of fiscal space. With the Government slipping on its budgeted deficit target the previous year, and with bond and currency markets nervous through much of 2018, it was important that any slippage be well contained. In turn, however, this was not going to be trivial because GST collections are tracking almost 15 per cent less than budgeted, both as the GST Council has successively cut rates and because compliance has been slow to improve. How, then, would the Centre square the circle: announce some agrarian package and yet contain the fiscal impact despite the GST headwinds?

As it turned out, the Interim Budget tried to strike a balance between fiscal prudence and responding to the agrarian distress. For starters, the fiscal deficit for the current year, 2018-19, slipped modestly off its target to 3.4 per cent of GDP—it was 3.5 per cent the previous year—belying some market fears of a large fiscal slippage. Net of asset sales, the Centre consolidated its deficit by 0.2 per cent of GDP in 2018-19. Furthermore, the Centre pegged its deficit for 2019-20 at 3.4 per cent of GDP, which, while less austere than markets would have liked, was an acceptable outcome if authorities can stick to the target.

Second, the Government did embark on a new ‘unconditional cash-transfer programme’, but it turned out to be more targeted and less expansive than had been expected in some quarters, entailing an annual transfer of Rs 6,000 to small and marginal farmers with land holdings of less than two hectares. Authorities estimate that this will cost Rs 75,000 crore in 2019-20 or about 0.4 per cent of GDP on an annualised basis, even as the programme begins retroactively from December 2018.

Let’s step back for a moment. The fact that India can even contemplate cash transfers is a testimony to the giant strides made on the underlying financial architecture, including greater financial inclusion, a near-universal roll-out of Aadhaar, and the proliferation of mobile telephony in recent years. That said, we still need to test last-mile connectivity to ensure that those at the bottom of the pyramid—at whom cash transfers will inevitably be targeted—have operational bank accounts.

That said, moving to electronic cash transfers has numerous benefits. First, it will reduce leakages. Second, it allows households to decide how best to use the money. Research in some countries has shown that when unconditional transfers are made to women, there is a greater likelihood of it being spent on social goods such as health and education. So, as cash transfers evolve, perhaps policymakers can specifically direct them to the eldest woman in the household. This would simultaneously boost both equity and efficiency. Third, cash transfers in lieu of more input price subsidies, higher Minimum Support Prices or guaranteed employment would reduce price distortions in both product and labour markets, and lead to better allocative efficiency.

Over time, however, it’s important that cash transfers replace existing subsidies rather than create new unfunded liabilities. The political economy challenge of withdrawing existing offerings is daunting, but that trade-off will have to be made if cash transfers expand, given India’s glaring lack of fiscal space.

THE PLAN IS not without its risks. Despite the narrower- than-expected cash transfer promise, its cost— in conjunction with tax rebates for the middle class that will cost 0.1 per cent of GDP—amounts to new budgetary commitments of 0.5 per cent of GDP. So how are the authorities planning to finance this? Given where we think tax revenues and expenditures will end up for 2018- 19, our estimates suggest that, de facto, the entire 0.5 per cent of GDP in new commitments will have to be financed by presumed budgeted tax buoyancy in 2019-20.

This will not be easy. For example, aggregate GST collections have grown less than 7 per cent over the last six months, but the Centre’s GST collections are effectively budgeted (given where we think they will end up this year) to grow by 25 per cent next year. Furthermore, even personal tax collections may be a challenge to achieve. They have been growing by 16 per cent a year thus far, and need to sharply re-accelerate in the period till end-March just to meet this year’s forecast. Even if that is achieved, personal taxes will need to grow by almost 20 per cent next year (taking into account the rebates)—on a forecasted nominal GDP growth of 11.5 per cent—to meet next year’s budgeted target. If this year’s personal tax forecast is not achieved, the asking rate will simply get higher.

Recall, however, that this was an Interim Budget. All of these assumptions could be revisited when a full Budget is presented in July.

More generally, the market’s obsession with the Union Government’s deficit belies the fact that the fiscal centre of gravity is fast moving to the states. Today, state fiscal expenditure is much higher than the Centre’s, as is their capital expenditure. The concern, however, is that in recent years, state deficits have expanded sharply from about 2 per cent of GDP in 2011-12 to almost 3 per cent of GDP in 2017-18. Furthermore, pressures are only going to increase as farm-loan waivers and cash transfers proliferate across states, adding to—instead of replacing—existing commitments.

THE WIDENING OF state deficits has several implications. First, on a consolidated basis (Centre plus states), there has been virtually no consolidation over the last five-six years, with the consolidated deficit close to the 6.5 per cent mark. What this also implies is that state finances are not currently aligned with recommendations of the Fiscal Responsibility and Budget Management Review Committee. Recall, that committee had proposed a debt anchor of 60 per cent of GDP for the economy, subsequently accepted by the Government for the next Budget, with the Centre’s debt-to-GDP pegged at 40 per cent and that of states at 20 per cent of GDP. However, given the current level of state fiscal deficits, state debt-to-GDP will continue to monotonically rise well above 20 per cent of GDP.

Even if state deficits, on a consolidated basis, were to be in line with the 14th Finance Commission’s Recommendations (close to 3 per cent of GDP), that is not consistent with state debt-to-GDP staying at 20 per cent, as asked for by the FRBM Review Committee. Rather, it is estimated, given the current relationship between borrowing costs and nominal GDP growth, that state deficits would need to decrease by almost 1 per cent of GDP on average to be consistent with a debt target of 20 per cent of GDP. This is something the 15th Finance Commission will perhaps need to address.

Containing state deficits, however, will require greater ‘incentive compatibility’ between markets and state deficits. Currently, markets don’t differentiate across states at all, in terms of fiscal positions and borrowing costs. A state with a deficit of 5 per cent of GDP and one with a deficit of 2 per cent of GDP face the same borrowing cost from markets. Why? Because markets presume that, given implicit sovereign guarantees, the creditworthiness of all states is the same, irrespective of their underlying fiscal positions. In turn, this induces moral hazard among states. Why would states reduce their deficits, even if they can, if prudence delivers no gains and profligacy bears no costs?

For a healthy market, one must observe state borrowing costs reflecting their underlying fiscal positions, which, in turn, requires either some regulatory intervention to generate differentiation or introducing constructive ambiguity about implicit sovereign guarantees by the Centre.

HOWEVER, ONE MUST look even beyond the consolidated Centre and state deficit to fully appreciate India’s true fiscal position. ‘Off-balance sheet’ borrowing has been on the rise in recent years. For example, Food Corporation of India (FCI), which should ordinarily be financed only via budgetary allocations, borrowed 1.3 per cent of GDP from other sources in 2017-18, apart from what it received from the Budget. Similarly, in 2018-19, FCI borrowed 1 per cent of GDP from other sources, apart from its budgetary allocation. This helps the Centre’s fiscal math, but the ‘effective deficit’ must include FCI borrowings, and therefore should be considered commensurately higher.

Admittedly, some of this borrowing, particularly by states and many CPSEs, is to finance much-needed capital expenditure and is therefore part of needed public investment. But borrowing of this quantum constitutes a large claim on domestic household savings, which have fallen in recent years from 23 per cent to 17 per cent of GDP.

Hefty public sector borrowing has macro-economic consequences. Sustained borrowing pressures have meant that India’s ‘yield curve’—see the chart above—has progressively steepened in recent years such that, for any given overnight policy rate of interest, benchmark borrowing costs for the economy are higher now than they were before.

To sum up, India must start making hard choices.

Should the Government focus on expanding the safety net, as was the emphasis in this Budget, by augmenting cash transfers and broadening pension coverage? Or should it focus on boosting physical infrastructure? Or should it focus on much-needed health and education to boost supply? One thing seems clear: India cannot currently do justice to all of these needs.

A public sector borrowing requirement of close to 10 per cent of GDP is unsustainable. It is also incompatible with the dynamism that India seeks from its private sector. Tough decisions will therefore have to be taken. How do we broaden the tax net? How do we jump-start strategic disinvestment? How do we rationalise existing welfare programmes to accommodate cash transfers? Policymaking is all about making intelligent trade-offs. The time for these is upon us.