A Burning in Memory…A Hole in History… 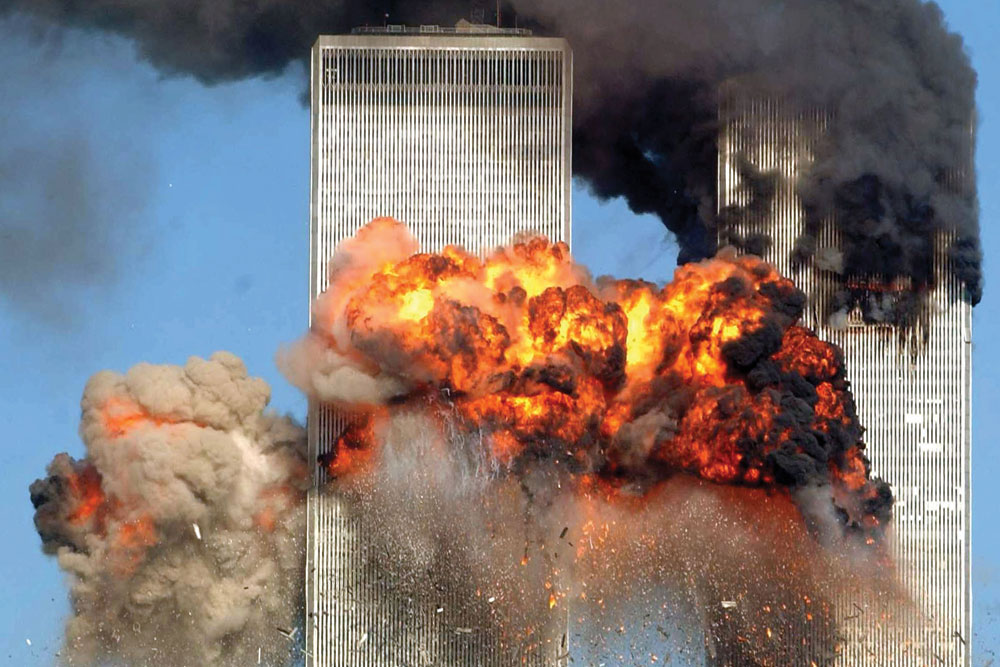 
On that morning in memory, when the twin towers of the World Trade Center melted down, along with them came apart the easy assumptions we had built around faith and humanity. It was up close, so spectacular in its savage precision, as if history was borrowing from man’s most extravagant imagination to stage a devil’s breakfast show. America was under attack, but what the free world saw beyond the debris of freedom’s tallest ambition was the nature of the new hot war, waged not by a country but by a concept consecrated by a god hurt by politics. Its namelessness, its facelessness, and its overwhelming physical proximity, made its horror a shared sigh of vulnerability. 9/11 altered the faultlines we were getting familiar with, sharpened the shape of hate, and led us to a reconfigured age of state-sanctioned paranoia, the banality of the Panopticon, a wilful abdication of civil liberties…and the youngest of the Abrahamic faiths living up to its ideal of permanent struggle for power. The world reborn in the embers of 9/11 shed the inherited certainties of political morality and, adding to a hastily constructed philosophy of survival, institutionalised suspicion and surveillance as necessary defence against the suddenly clarified rage of Evil, which stepped out of the Book into the real, rugged Mount Jihad.

A faith steeped in the theology of hurt needed a prophet of revenge, and there he was, turning the “looming tower” into a metaphor for the soaring oppressiveness of the infidel. Osama bin Laden began his career in jihad as a rich nomad with planeloads of petrodollar, a runaway mercenary of the Most Merciful. As the guest jihadi emeritus in the Taliban country, he planned the most audacious attack on the “wrong civilisation”, his imagination indebted to the techno-wizardry of his enemy’s art. Islam’s radicalism badly needed an action hero, its own Che instead of a superannuated spiritual guru, or a wise imam setting the limitlessness of the kingdom. The lanky Sheikh was tailor-made for the role, his greying beard blowing in the wind, his Kalashnikov the perfect accessory of the angry prophet, and those inscrutable eyes piercing the camera completing the grainy image of videotape jihad. For so long, the ghettos of the Arab world were denied an icon who could embody their fantasy of a thrilling passage to paradise—and, eventually, the ultimate cult of martyrdom. The Sheikh filled the void, and he would offer them a Picture Book for the future.

America in the aftermath of 9/11 did not wallow in victimhood, and that was mostly because the occasion got a war president it deserved—a leader who had the resolve to break out of the caricature of himself and stand before his people and the world as a combatant moralist. Bin Laden’s communiqués of hate required a counter-narrative, and the neo-conservatism of George W Bush provided one. The War on Terror, with Afghanistan as its first battlefield (later joined by the problematic Iraq), was—I know we’re getting into disputed territory here—the Just War of this century, and thematically, it was our war too. In its most prosaic definition, it was a war against the 9/11 terrorists and the regime that harboured them. It was the war against a bad idea—brought to us in blood-curdling clarity by the religious despotism it deposed.

Taliban, the madrassa-born warriors who had initially won popular acceptance on their rage against warlordism and corruption, in power, would follow the familiar trajectory of ideology-driven regimes in history. The problem here was that it was not an ideology written by man. It was God’s diktat. The Afghanistan left behind by the Soviets was a battered country caught between an illegitimate remnant of communist occupation and tribal warlords. The Taliban were empowered by resentment, and the Book-born morality of the liberators concealed the impending bestiality. God’s terrorists—the British historian Charles Allen’s accurate phrase for the warriors of Wahhabism—would become the modern world’s first builders of a medieval Emirate, scared of women, music, clean-shaven faces, kites, and all the while accumulating severed limbs and hanged deviators as a reminder to the sinners. The chief enforcer, the one-eyed mullah, his handicap a talisman of resistance, was the most indulgent host of bin Laden, who would survive the fall of the Taliban as a die-hard troglodyte. America’s war on terror would continue even after the death of bin Laden in his next indulgent host country. The Forever War would pass through various stages of surges and withdrawals, and its destination would become increasingly hazier in the post-Taliban Afghanistan.


What was it all about once the Taliban were gone? Once bin Laden was killed in his last hideout? After the regime change, in retrospect, it was all about keeping afloat a corrupt, parasitical establishment. Its achievement in the restoration of a fragile civil society in Kabul was outweighed by its contribution to the second coming of the Taliban. As I argued in this space earlier, America didn’t have the mind or the inclination to play the imperial role in a country that it didn’t even bother to comprehend. The geographical distance was matched by cultural incomprehension of the invader. Nation-building, no; nation-running, ok; but it was a mission destined to make the original mission redundant. The Taliban were regrouping and relearning the forgotten art of resistance and conquest. In the meantime, jihad had found new battlefields, new enemies, from Aleppo to Paris, London to Mumbai. It was as if the world had recovered from the videotape jihad of bin Laden only to be introduced to the YouTube jihad of the Islamic State: The black-robed killer in a balaclava, with a raised knife, looming over his orange-robed (a nod to Guantanamo) victim somewhere in the deserts of Syria. We had resigned to the inevitability of jihad: Mumbai’s iconic Taj Mahal hotel in flames as gunmen from Pakistan played out a seaborne version of 9/11; with Allahu Akbar on their lips and guns in their hands, killers storming the editorial meeting of a satirical magazine in Paris; a jihadi crashing his killer car into the perimeter fence of the Palace of Westminster in London…Every God’s terrorist was a bin Laden now, but we chose to dismiss them as lone wolves. We wanted to move on.

Looks like we haven’t come a long way after all. It’s commemorative time, and the American president, even as he takes pride in withdrawing from his country’s longest war, can only afford a celebration of irony. There are no permanent wars, maybe with the sole exception of the Israeli-Palestinian conflict. There are no wars that take a country back to the point of its origin either. On September 11th, President Biden would be commemorating the Great Waste of America—for, what President George W Bush began as Just War has ended as Biden’s Lost War. His real audience would be in faraway Kabul, where he has earned the distinction of being the American who made an easy passage for the Taliban’s return. They are all there now—the men who continued to target America even after 9/11; men who killed the Buddhas of Bamiyan; men who were offended by a woman’s face; men who turned belief into bloodlust. And they occupy the same spiritual ecosystem that sheltered the man who let hijacked planes fly into the twin towers. They preside over radicalised Islam’s new base. Has commemoration become defiled morality? Has it taken twenty years for idealism to become cynicism?

The shock and sorrow of 9/11 defied geography. Its anniversary should start a reappraisal of the sanguineous idea that propelled those planes twenty years ago. We, Indians, have been there before, as one of radical Islam’s old victim states, and our suffering only lacked the dramatic effect worthy of global headlines. The stoic state could not see the terrors it survived as part of global jihad, in spite of Kashmir. 9/11 united the victims in their belated recognition of a religion’s raw edge. On the commemorative day, the debate on Islam is as condescending and dishonest as ever, the ignominy of ‘Islamophobia’ thrown at anyone who dares, like the self-professed heretic Ayaan Hirsi Ali, to say that the problem lies with the scripture itself. No religious text should be beyond cultural or anthropological scholarship, for religion tells wonderful stories—and our moral inheritance is indebted. The fanatic, irrespective of the name of the faith, is blinded by those stories. Power turned them into doctrines. Questions need to be asked from within the fold itself, by the silent majority of liberal Muslims. Perhaps an Islamic version of a Martin Luther could animate the conversation—and deny the old new rulers of Afghanistan a divine mandate, for there is no divinity in hate and fear.