The Day of the Goat

Can it become a confidence-building measure between India and Pakistan? 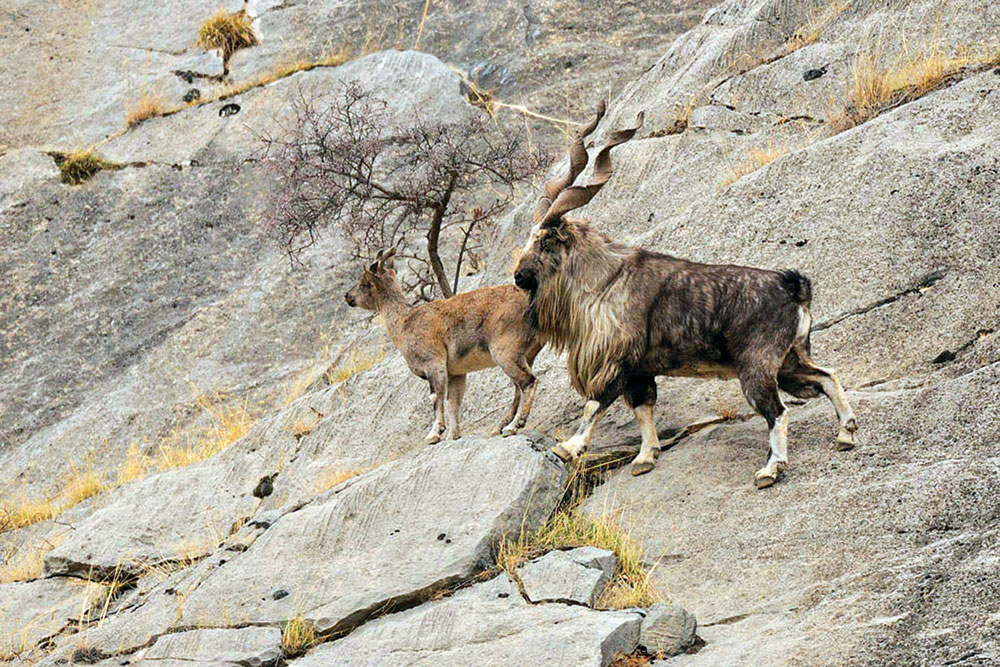 FIVE YEARS AGO I undertook a climb up the Kazinag mountains to the Line of Control (LoC) with Pakistan. I wrote most of this, sitting under a rock-overhang, six hundred metres up a sheer cliff. Around me, the landscape was powder-white, clad in three feet of snow. The ascent took me six hours and what started as an easy ramble up the banks of the Jhelum had turned, in the last quarter, into a slow trudge over sludge. With night fast falling, our small team had to make quicker pace but my ice shovels sank into the snow faster than toothpicks in butter. As my legs gave way, there was only one way to make it to the top; take the extended hand of local guide Akbar. Once at the top, I settled in for the night.

We were about 50 km from the LoC with Pakistan, in the Uri district of Kashmir. About 50 km as the crow flies and only a bit more as the markhor walks. This, here, is the global capital for the world’s largest mountain goat, the Pir Panjal markhor. If you read the otherwise excellent field guide to the mammals of Pakistan by TJ Roberts, it errs only on the markhor. After describing its range in Chitral in Pak-occupied Kashmir, it says, ‘A very few also occur in Azad Kashmir (PoK) but only one small herd estimated at fifteen to twenty individuals in the western extremity of the Kazinag range. The remaining markhor, in the tributaries of the Neelam valley close to the ceasefire line, have all been exterminated in recent years by troops stationed in this frontier region.’ That was written in a revised edition of 1997. Since then, much has happened between the two countries and a tangible reminder is the 550 km of concertina fence that has sprung up along the LoC. The Indian Army and Border Security Force battalions guard the fence on the Indian side of the border. I am sure there are similar positions on the Pakistan side as well. On both sides of the border, tripping nimbly from crag to peak, are the markhor; fine old billies, copper ruff fanning the air, golden-white beards swishing around and 50-inch corkscrews mounted proudly on their ramrod bodies. Elsewhere she-goats and kids gambol in the snow, the young ones, mock-fighting each other, spraying loose snow and gravel while their mothers crop whatever green clings onto bare rocks or wormwood bushes amidst the snowy middens. So Roberts was wrong after all, and the Indian side of the border does have the markhor that have survived the conflict, survived the troops and survived the fence.

The enumeration of the markhor on the Indian side of the border has an interesting story. It was in 2003 that the Bombay Natural History Society celebrated the centenary of its vintage journal. On the occasion, they decided to honour the legendary American naturalist and writer George Schaller with the Salim Ali International Conservation Award. Schaller accepted the award graciously but in a surprising turn on the stage, reminiscent of a pirouetting markhor, he donated the monetary component to the Wildlife Trust of India (WTI), so that (paraphrasing his words) the money remained in India and was used well in the field. Schaller’s monumental work Mountain Monarchs was foremost in my mind as we accepted this gesture and thus were born Schaller Conservation Surveys, with the markhor in Kashmir being its first beneficiary. Several years have passed since then and many a season of meticulous field work by a small band of field workers have established markhor numbers, their distribution and even a bit of their ecology and behaviour. What was interesting, however, were the two clear populations that the WTI and the Nature Conservation Foundation (NCF) established in Kashmir in partnership with the Jammu and Kashmir Wildlife department.

ONE POPULATION OF the markhor lived in the half-a-dozen or so nallahs that scoured the Kazinag range. Two sanctuaries, in Limber and Lachipora, and an old game reserve in Naganari were existing, but the boundaries of the reserves were low in the hills, along the banks of the Jhelum and not high enough for the markhor in many parts. Walking the Malangan and Gujjar nallahs in Lachipora, for example, or the Mithavani in the Limber, it was immediately clear that to protect the rare goat, it was needed to take the protected area all the way up the mountain slope—for seasonal altitudinal migration is an attribute of the goat. Thus was born the Kazinag National Park concept, and to the credit of the state government, in December 2008, the park was notified, making it the first national park notified in Kashmir since 1986. A good story coming out of the valley after decades, all thanks to a goat!

Even more interesting was the case of Hirapora. When the surveys began in 2004, the WTI followed a 60-year-old shikar map, which marked out the distribution of various ‘game species’, including the markhor. Even after 60 years of Independence, this was the best distributional map available to researchers to base a survey on (so much for the various institutions mandated to conduct zoological surveys in the country). Most of the markhor areas shown in the map did not have markhor by the 1980s, a clear sign of the shrinkage of its range. However, Hirapora sanctuary, about 75 km outside Srinagar, surprised us with an estimation of 150-plus goats. Good, so the goats had moved and found themselves a new home, and in a sanctuary (yet another sign of independent India’s fauna remaining only in the protected area network created in the early 70s by a prescient government). But with the good news came the bad news: The Hirapora sanctuary was about to be de-notified, or a part of it definitely, for through it passed the strategic Mughal road that roughly halved the distance between remote Poonch and Rajouri areas in Jammu province with Srinagar in the Kashmir valley; upgradation of the Mughal road to a highway was planned in the late 80s and the work was initiated in 2006. This was the era just after the Vajpayee tenure at the Centre that had fast-tracked development in the Valley. Now, the Mughal road was no new construction. Connecting Poonch in Jammu to Shopian in Kashmir, the road was used by the Mughals in the 16th century. Akbar was said to have used the road in his 1586 campaign in Kashmir and his son Jahangir died in 1627 on the road in a caravan as it wound its way down to Delhi. In what must have been a gruesome yet heroic feat, his wife Nur Jahan was said to have ordered that the emperor be disemboweled, his innards buried on the Mughal road, and the body to be kept in the palanquin which accompanied all the way to Rajouri. This was ostensibly to keep the news of the death to not precede her arrival in Delhi and to preserve the body till it reached the plains. Jahangir was interred later in Lahore but his innards or the tomb that was built over them still stays at Bagshar.

In the face of bettering the lives of people haunted for decades by insurgency and virtual isolation, what chance did the fate of a wild billy have? Conservation today is full of such choices and the story of Hirapora shows what a bit of ingenuity, a dollop of science and the right politics can do for conservation. The WTI first brought out a critical document with the NCF and the state wildlife department that clearly showed the markhor distribution. When an intrepid youngster brought the case to the Central Empowered Committee (CEC) of the Supreme Court, the document was also produced. With the conservation value of the area now established and the case sub judice, the Trust used its political nimbleness and conservation pragmatism to recommend to the CEC that the road, if it did have to pass through the area, would effectively make the markhor shift their territory and thus new territory needed to be given to the sanctuary. The court did not only do that, awarding 149 sq km of additional land to Hirapora, but also put stringent conditions on the building of the road, and even better, encouraged the Union Government to set up a markhor recovery plan and fund for the state to conserve the last of these magnificent mountain monarchs. In a single sweep, Kashmir had got itself a new national park (Kazinag), increased the area of a wildlife sanctuary by 50 per cent (Hirapora) and greatly increased the revenues available to the wildlife department of Jammu and Kashmir to protect its wildlife. The adroitness of the scheme is only surpassed by the skill of the markhor to have survived through so much conflict and human turmoil, right at the very line of no return.

Come summer, thousands of Bakerwals bring their goats up the pass from Jammu into Kashmir. They now form the new challenge for the markhor. The domestic goats compete for grass as well as bring in disease challenges for the wild goat. What a travesty, if the markhor, who have outlived the Mughals and the Pakistan wars, finds its domesticated cousin as its final conqueror. I would like to think differently though. The goat will find more inaccessible terrain and live on. In Pakistan, it is celebrated as the national animal. But in India, two large populations flourish, protected by the inaccessibility of the terrain, a few conservation groups, the Indian Army and the Kashmir government. I would rather propose the animal as a ‘confidence-building measure’ between the two countries. For what else example exists of India helping Pakistan on the ground, in this case by conserving its national animal?