×
Web Exclusive: Elephant in the Room

Only a step away from being endangered 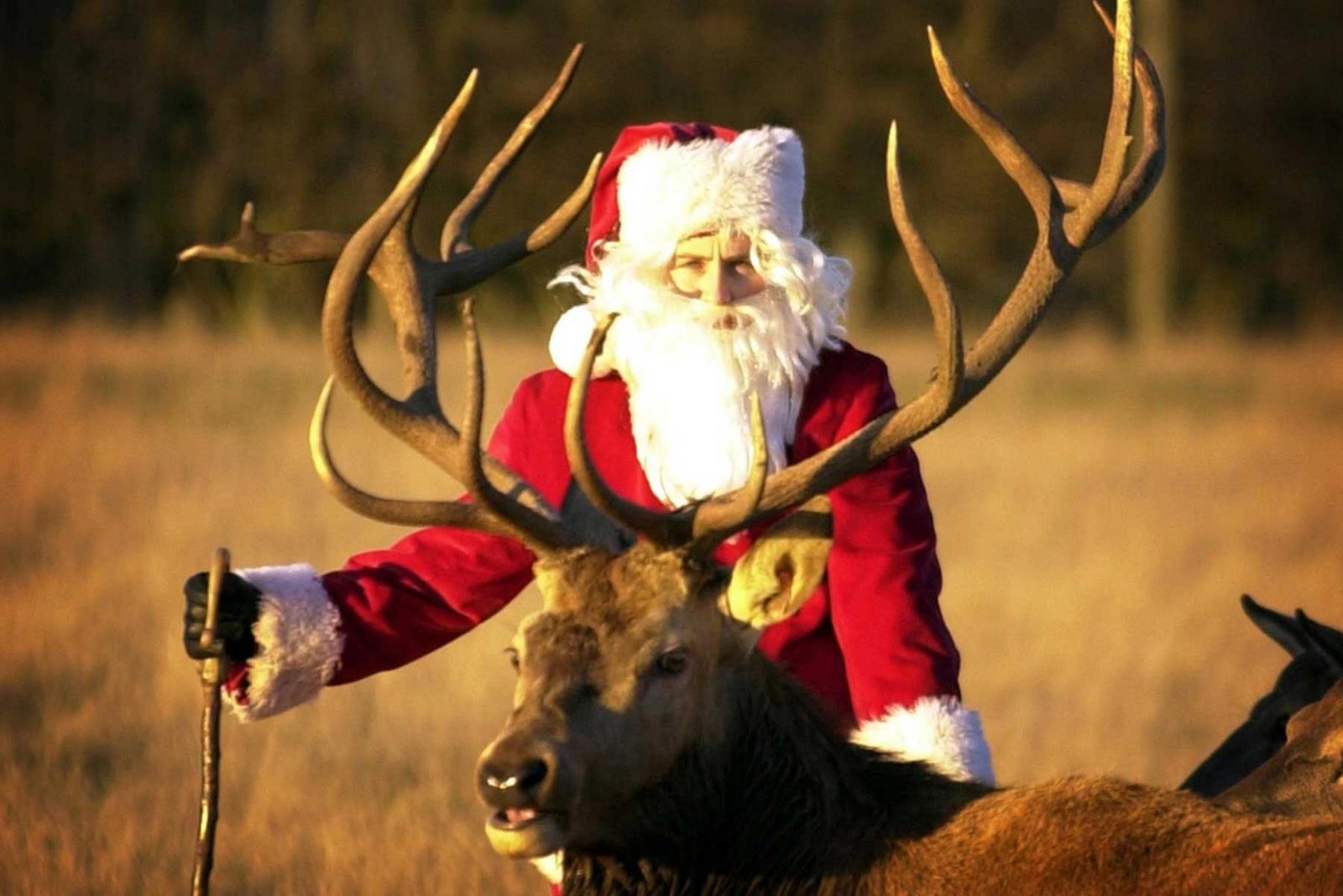 If reindeer are Santa’s deer then Santa should be an Ilhalmiut. Or he could be an Ahialmiut or any of the eight or nine northern tribes that make up the Caribou Inuit in Canada. These northern people traverse the tundra in cyclical rhythm with the caribou, as reindeer are known as in the New World. Nobody has described the Ilhalmiut as poetically as the naturalist-writer Farley Mowat. The man who famously lived with the wolves for seasons on end, throwing his clothes off when the howls of wolves filled the air and eating rodents with their skin on, to prove that wolves could survive the winter by eating rats, wrote several bestsellers. Never Cry Wolf and Song of the Whale are probably the books that made him the most money, but it was People of the Deer that haunted me most, from the time I read it as a callow teen.

“The Ilhalmiut (People from beyond) do not fill canvases with their paintings, or inscribe figures on rocks, or carve figurines in clay or in stone, because in the lives of the People there is no room for the creation of objects of no practical value. What purpose is there in creating beautiful things if these must be abandoned when the family treks out over the Barrens? But the artistic sense is present and strongly developed. It is strongly alive in their stories and songs, and in the string-figures, but they also use it on the construction of things which assist in their living and in these cases it is no less an art. The pleasure of abstract creation is largely denied to them by the nature of the land, but still they know how to make beauty. They know how to make beauty, and they also know how to enjoy it– for it is no uncommon thing to see an Ilhalmio man squatting silently on a hill crest and watching, for hours at a time, the swift interplay of colors that sweep the sky at sunset and dawn. It is not unusual to see an Ilhalmio pause for long minutes to watch the sleek beauty of a weasel or to stare into the brilliant heart of some minuscule flower. And these things are done quite unconsciously, too. There is no word for ‘beauty’–as such–in their language; it needs no words in their hearts” wrote Mowat.

But it was not the weasel or the miniscule flower that invaded the lives of the People from Beyond like a force of nature; it was the muscular herds of migratory Barren-ground caribou. Caribou owe its etymological origin to a Canadian-French word qalipu or snow shoveller. The Barren ground caribou, that inhabited the region that Mowat visited, migrates in large asymmetrical ovals west of the Hudson Bay. In ancient days the men and the deer played out a natural symphony of sorts. As the deer moved, shovelling snow with their large, crescent-shaped cloven hooves, the People of Beyond followed them. The deer led them to promised lands of plenty till there was the last bit of green upon earth and when there was only snow, the deer ate the lichens scraped off rock faces and for the people, the deer themselves become a winter harvest. The men took only as many deer as was necessary to feed their families and the two lived symbiotically for centuries. And then, the modern world crept northwards and reached their grounds. Men with rifles decimated herds of deer, disease from their cattle swept into wild populations and the deer populations shrunk and started to die off. The people were also moved, not once but thrice by the Canadian government, out of their traditional barren grounds. The deer died out. And the Ilhalmiut followed suit. When Mowat visited them there were only a few dozen people left. Wandering the snowy wastes in search of deer that were not coming back, the People of Beyond had run out of winter manna. The grandfather, walking out into the cold and shedding his warm cloak as he embraced an icy death, so that his children would survive the winter is Mowat’s dramatization of the death of a tribe. That powerful imagery did not visualise the equally agonising death of a caribou herd that had missed its annual rendezvous with the Ilhalmiut.

That is the American story of caribou. But the term reindeer is old Norse for a horned animal. And a truly amazing horned animal it is too. Both males and females bear antlers which grow to be the largest relative to body size of any deer, and only second to the moose in absolute terms. They are flat-beamed antlers and the first time I met a reindeer it was the antlers that first swam into view. I saw the deer close to a red post box that proclaimed it was the closest post box to the place Santa lived. I was a four hour flight away from Oslo in Norway, on Spitsbergen Island in the Svalbard archipelago. Svalbard is a top wildlife destination in summers as the warm Gulf Stream brings spring to the icy north. A million small flowers carpet the mossy tundra and the calls of an equal number of birds rent the sky. I walked carefully in Longyearbyen, the capital of Svalbard, as hidden cryptically in the ruts of the dogsled tracks were a number of Arctic tern nests and to approach one was suicidal. The nests were defended fiercely by their owners, small terns but capable of a nasty dive-bomb attack that can leave the scalp bereft of a thatch of hair and bleeding to boot.  I dodged them successfully watching their aerial pirouettes with wonder and a male snow bunting sang lustily of the scene that stretched out before both of us. In the distance church bells rang, those that would ring in Christmas and see Santa before any child in the world could conjure him up, for in local lore Santa lived in an abandoned mine a few metres away from where I stood. It was then that Rudolph swam into view.

He did not have a red nose that was for sure. Both the nose and half the face was blackened as if the deer had descended head-first through the proverbial chimney. And he was a little shorter and stockier than I believed reindeer to be. The Svalbard deer are a sub-species known to be smaller than their continental cousins; insular dwarves in eco-speak. His coat was ragged from the moult as he shed his winter wear for a few months of sun-garb. But he did have an enormous pair of antlers. Each side had three tines. One, a three-pronged curved affair, another a five-fingered flattened beam and the lowest one a flat, open-palm piece of bone. The last one dipped over his face like a sun-visor each time he lowered his head to graze. Behind him, came up another fine male, his antlers framing the sky as well. They were both males, despite the fact that reindeer are the only true deer where both males and females bear antlers. When the males moult their antlers after the season of fighting and mating is over, the female with the largest antlers takes over the herd. Calves that have mothers with the largest antlers fare the best, males that have the largest antlers also do, as they get the largest number of females to mate. It’s all in the headgear for Santa’s deer.

I watched, entranced, at the largest migrating mammal of the north. From Russia and Scandinavia, to the Americas, like the wildebeest migrations of Africa, hundreds of thousands of deer move thousands of kilometres. Some of them, especially the porcupine caribou of Alaska can move 3000 kilometres in a season. But the large flowing rivers of caribou are no longer the norm. Even as late as 1939 native American chiefs remember waiting ten hours for a herd of deer to ford a river. That must have been a roaring torrent of hooves. A cacophony of clicking knees, an anatomical peculiarity that allow the deer to keep track of each other in a snow blizzard. But those days are long gone. Very large herds can now be counted on two hands and each herd is monitored by wildlife managers and scientists. The days of ranging vast and wild seem numbered. The IUCN have placed the deer as vulnerable, only one step away from being endangered. All of Santa’s deer; the quicksilver Dasher and Blitzen, the extrovert Dancer and Prancer, the easy going Comet and Cupid, the dashing Vixen and Donner and the lovable Olive and Rudolph, need saving.

The Ilhalmiut have a saying, “Once upon a time there were no caribou on the earth. But there was a man who wished for caribou, and he cut a hole, deep in the ground, and up this hole came caribou, many caribou. The caribou came pouring out, until the earth was almost covered with them. And when the man thought there were caribou enough for mankind, he closed up the hole again. Thus the caribou came up on earth”. We need to find that man again and he needs to dig up another hole. For, the world is losing its truly wild caribou at rates that will need the magic of the People of the Deer. Nothing else, it seems, will bring them back.