Catching a Tiger by Its Tail 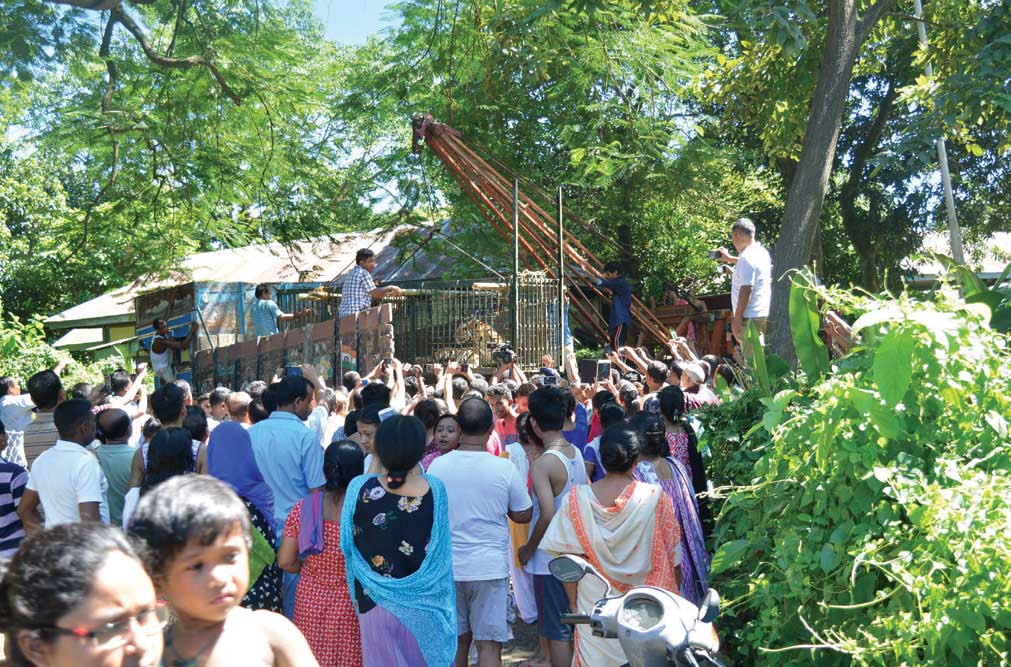 WHEN I STARTED work in the world of conservation three decades ago, I thought I had to save tigers and elephants from poachers and hunters; men with handlebar moustaches and wrought-iron hearts, wretched and rusted souls drenched in blood, gore and jungle- sweat. Today, my team of veterinarians, biologists and sociologists catch tigers and leopards, elephants and bears to prevent them from being slaughtered by village mobs. The biggest threat to these large animals is not Veerappan or Sansar Chand anymore, the threat comes from the common man of Laxman, the aam aadmi of Kejriwal. The country is shrugging off a heritage that once included nature worship and has taken up arms against mega-fauna that intrude into the sterilised capsules of human existence. And thus, the Wildlife Trust of India that I run has to spend a large part of its resources, both monetary and human, rescuing animals from ordinary people. Let us take the tiger, for instance, and see what is happening to our national animal across the country. For therein hangs a tale, or should I say a tail, of misery. Here are three different stories of three young veterinarians and one striped cat.

Let us start in the Brahmaputra valley, a landscape of evergreen forests and alluvial grasslands dripping biodiversity. Kaziranga has the highest density of tigers in the country, the largest population of one-horned rhinos in the world, and is an avian paradise for the birdwatcher. But it is not parakeets that are a cause of trouble to the villagers. Tigers often come out of the park as their numbers increase and young males seek to disperse from their natal ranges. Prashanta Boro is a young veterinarian who had also dispersed from his early career in veterinary science involving domestic animals to that of a wildlife veterinarian at the Centre for Wildlife Research and Conservation run by the Trust at Kaziranga. Calls for catching tigers that fell into wells or leopards that came into habitation were usual and one day he received a similar call about a tiger near Jakhlabanda that had taken one human life. He was led through a gaggle of excited villagers and a few forest guards into a patch of forest where the tiger had taken shelter. Boro asked for a captive elephant to move into the forest as is protocol, but the local police, who had arrived on the scene, forced him to walk into the tiger trap. And so the two vets, for he had taken a colleague along, advanced into the scrub. The walk was a short one.

As they entered the bush, the tiger leapt at the policeman in front of Boro. Boro immediately raised his arm, tranquiliser gun ready to fire a sedative. The policeman, meanwhile, was knocked backwards by the force of the tiger attack and released a spray of bullets from his weapon. The tiger collapsed as bullets tore into him. Boro felt a searing heat pass through his right arm. He looked down to see blood pouring down his side. “I have been shot,” he screamed. Collateral damage. The tiger was dead. Boro had been shot through his brachial artery and the nerves around it. In panic, Abhijit, the other young vet, bundled Boro into our vehicle and drove him towards Guwahati. Three hours of blood loss—Boro could die. An entire state machinery swung into action after a flurry of phone calls. A vascular surgeon on holiday from a national hospital was put on call. Emergency surgeries and long recuperations followed. Boro lived to fight another day but his right hand is forever disabled. He will find it difficult to hold a pen or drive a car all his life.

CUT. MOVE THOUSANDS of miles away and Retake. Another young vet, Shantanu Kadambi, is facing his first tiger tranquilisation in Bandipur Tiger Reserve. The tiger has already killed several cattle. Shantanu is accompanied by forest officials and has tried time and again to sedate the cat through thick lantana bush. Finally, he sees an exposed leg through the dry twigscape of lantana weeds. As he raises his arm to fire, a young villager throws a lighted firecracker at the tiger. The cat roars and charges. Shantanu, ill-prepared for the onslaught, runs helter-skelter up a nearby slope, away from the tiger, he hopes. He can hear it roaring right behind him. As he huffs his way up the hill, he realizes he has made a mistake. The tiger is not behind him. Sneaking up through a watercourse that wound its way up the hill, the cat has reached the top before the vet. Shantanu lifts his arm for the second time in five minutes but this time to shoot the dart into the tiger, which is but a few metres away. In his own words, “There I was, completely out of breath, wearing only one Croc as the other had fallen off in my mad dash to safety, without guard and gunner at the top of the slope, facing the tiger I was trying to get away from! It was rather hilarious later on, as the officials and media who were on the other side of the ravine saw me running up the slope, lifting up the gun and shooting the tiger in a matter of seconds. They thought I had run after it to shoot it and handed me a commendation a few weeks later. I did not have the heart to tell them they had got it all wrong!” Thankfully, Shantanu, or his stars, had got it right. If the tiger, disturbed by the firecracker, had gone straight for him, or if, after running up the slope and coming face to face with our national animal, he had not found the nerve to fire straight, there could have been a different tale to tell. And that would have been wrong.

Circa 2017. Travel a few thousand kilometres north now, into the terai, deep inside legendary tiger terrain. This tale is from outside Dudhwa, where a neo-Corbettian cat has already claimed eight victims. Our veterinarian, a young Tamil lad called Aaron, accompanied by our senior sociologist Pandey, and forest officials including Dr Shukla, a vet, is on his way for a capture operation, perched on a captive elephant. The four pachyderms with the men atop, enter the tall sugarcane fields where the tiger is lurking. He had claimed a man only the night before and an angry crowd fringes the proceedings. As the four elephants, two trained and two untrained in cat capture, approach the beast, it leaps out at them. Aaron and Pandey relive those moments: “The two trained elephants charged back at the tiger, trumpeting loudly, and we almost lost our balance. Our hearts skipped a beat when the tiger leapt past us, its mouth just a foot away from our dangling legs. We turned back to see the two untrained elephants had already run out of the cordoned area and their riders were standing on the ground! Now, only the two trained elephants remained, continuing the task shoulder-to-shoulder. The tiger was sighted again, hiding inside the sugarcane. Both tranquilising teams had the narrowest of opportunities to take their shot. Dr Shukla, the senior and more experienced vet, took his chance. He was on target thankfully, for if his attempt had failed, the tiger would have had to be shot dead. Even before we could get our breath back, the massive crowd of onlookers, a gathering of more than 5000 villagers, who had been watching from a distance, rushed towards the sedated tiger with sticks and whatnots. We jumped off the backs of the elephants, which now had to be used to drive the crowd away from the sedated tiger. Finally, after an hour of strenuous effort, the tiger was placed in a cage.”

In the countryside mosaic stitched together with anger and intolerance, a few madmen are attempting to save our national animal. These are but three tales. There are several more. Of another young vet who strapped a tranquilised tiger onto a captive elephant’s back and took it to safety through several miles of forest to avoid a village mob that was waiting to kill the tiger and lynch him. Of another lad who spent the night in a cage with a bleating calf, waiting for a man-eater to approach the bait. All he had were a few rusty iron bars and his trusted dart gun between him and a ferocious man-eater. Then there is the story of a vet who went down a well where a roaring tiger was trapped and sedated and later hauled the animal to safety. These are the modern heroes of our times. They do not stalk the deep, dark forests of Corbett and Anderson. They are drawn into sugarcane fields and lantana scrublands, wells and cages, deep in human terrain. Armed with sedatives, skill and a daring that defies imagination, these brave hearts take on leaping tigers, charging elephants and bloodthirsty mobs. But such operations are mere Band-Aids to a dying Mother Earth. Nature’s protective placenta has been ruptured and both man and beast are drenched in the once nourishing but now suffocating amniotic fluid. The forests that could absorb the flow are long gone and the breeze that could assuage the mind is poisoned. We are catching tigers, no doubt, and moving them to safety. But we have not been able to lift them by their nape as their mothers do when cubs have to be moved from an exposed den to a safer haven. We have caught them by the tail and almost instantly been caught ourselves, in the deadly circle of teeth and claws as the animals swing around defensively at us. Man or beast? The tiger or us? Who can tell?