Turacos and other rare creatures in the Kakamega rainforests 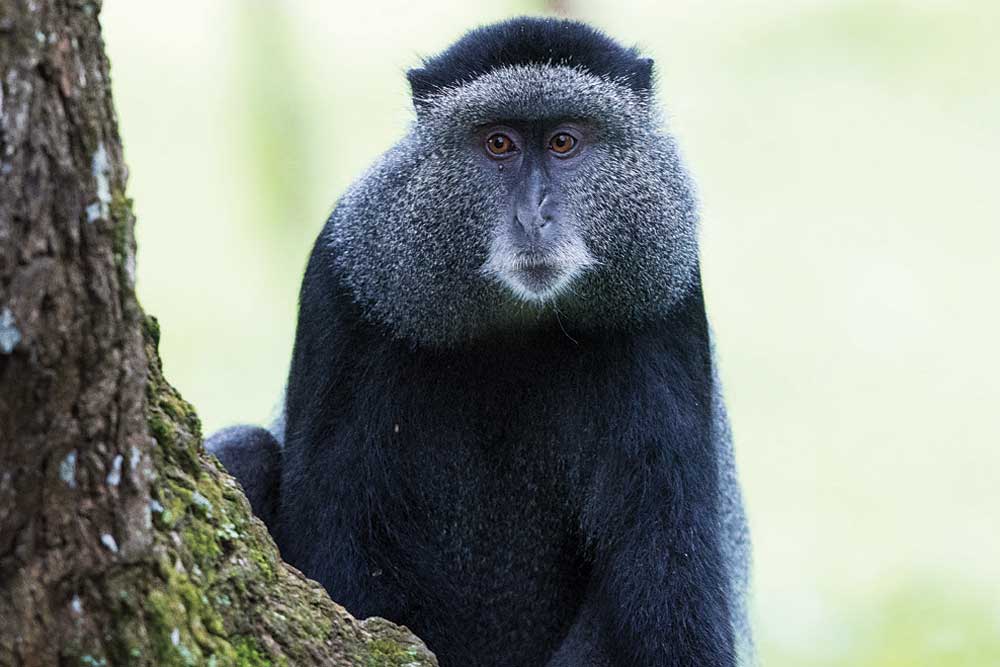 THERE ARE A million veiled miracles in every rainforest. When the said forest is an isolated fragment of the Guinean-Congolese shield, perched on the western frontier of Kenya, the miracles multiply. I flew in through the highlands of El Doret, a hill town with unending streams of anaerobic runners. As I drove down the mountainside, they snaked along the motorway; lean, sinew-bound, wearing athletic brands numbered on the back and front to ensure they are not lost to the Kenyan Olympic dream. In the still high-altitude night air, I dreamt instead of blue monkeys and blue-green turacos. Blue is an unusual colour for all life but especially so for mammals. The blue whale is actually grey. The blue saddleback mountain goats in Kerala are also actually a dark grizzled grey. In fact, not many living beings can produce blue or green pigments. The butterflies and small birds that flash blue are using iridescence or a light trapping phenomenon in their feathers or wing barbules. Blue seems to be a colour that is diffused rather than refracted directly, something physicists refer to as the Tyndall effect. Mammalian hair is even more restrictive, being only black or brown, although a smattering of yellow or red can also be present. Blues and greens are impossible. The green on a sloth’s back is algae. The only true blues are present in the testicles of some vervet monkeys and the face of a mandrill. And indeed, I am aware that the blue monkey of Kakamega is fraudulent too. Like the Nilgiri Tahr, it is only a grizzled grey-brown with a cast that looks blue to the eye at certain angles. But the turacos are for real as they are the only birds that can produce turacin and turacoverdin, pigments that scatter blues, greens and reds across their feathers. Their punk hairdos and permed facial whiskers are colourful too. This primitive of plantain-eaters has in the past been known as louries, go-away birds or turacos. Today, the term ‘go-away birds’ is applied to the members of the family that have the least colour while the turacos are the ones that light up a gloomy forest with their razzmatazz. My dreams have a Technicolor mix of blue and green turacos, red-tailed monkeys, black and white giant hornbills, equally large, black and white colobus monkeys, fluttering scarlet breasted sunbirds and red legged sun squirrels. Dawn breaks with the whoosh of the great wings that bear the hornbills. I stumble, even before morning coffee, into Kakamega.

The Isicheno trail, named after the eponymous village, goes from the forest station into the bowels of the rain forest. At the doorway to the woodland, we see the first of the blue monkeys. A couple of them pose at the base of a massive tree trunk. Obviously accustomed to tourist handouts, they seem unafraid as I approach to photograph them. In the forest, for the next two days, one sees them on the canopy and sometimes on the ground, but never too close. The blue is confined to their dorsal fur. Their cheeks are puffed and grizzled, a creamy white diadem of fur adorns their foreheads and borders the lips. The eyes shine a dull apricot from under the dark bonnet formed by the hair. One is eating a fig, unripe to my eyes, but part of its varied frugivory. The other is quietly grooming itself. From the trees beyond, its troop members call out. Mostly, I can hear squirrel-like squeaks. The females are the ones that make that noise, David instructs me, the male makes a loud explosive pyow. The need for the male to call is minimal as it is a single-male harem. There is no need for constant alpha-male demonstrations. David Makombo is a nature guide who mixes Swahili, English, Luia and Latin interspersed with the low coo of a forest dove or the shrill squeaking of a squirrel to bring the inmates of Kakamega to life.

The giant croton and the Elgon teak trees that line the road are full of life at thirty metres and above. We start to crane our necks into a ‘canopy-gaze’ posture that is a must for any serious mammal or bird watcher in a rainforest. The gaze turns downwards only when small brown-chested alethes and the scaly breasted illadopsis (ground robin and ground babbler of the rainforest) scuttle underfoot. The loud honking of the hornbills turns our gaze upwards again. There are four of them, feeding on top of the canopy. They eat fruit in large, greedy gulps, tossing them into the air and swallowing them whole. I have seen one toss a flying lizard into its mouth in the Western Ghats. It can look terribly gluttonous when feeding and then oh-so-dainty when it feeds its mate. One of them decides to take off and the whole forest seems to reverberate. “They are helicopter birds, sah,” says David and soon we are regaled by his mimicry of birds.

The predominant birds in the rainforest seem to be greenbuls, dull olive green birds that belong to the bulbul family but are wholly greenish in colour. There exists an array of them, mostly named after biologists as Shelley’s, Cabani’s and Ansorge’s greenbuls illustrate. But the one that captured my attention was the joyful greenbul. What a lovely name and possessor of an equally melodious voice as well. When I finally saw the bird, it was good to see that it had a golden mantle on rather than the sombre greens that cloaked most others of its family. It played around the tree tops with a stunning emerald cuckoo and a bevy of green-headed sunbirds. In India, racket-tailed drongos lead mixed feeding flocks of birds in moist forests. In Kakamega, the greenbuls seemed to lead the way, especially the ridiculous yellow-whiskered greenbul with its chuckling call. The birds seemed to follow patches of sunlight, avoiding deep shadows and flitting onto the open glades where the rays of the morning sun penetrated deep into the forest.

Equally high up in the canopy, the squirrels were having a gala time as well. The red-footed sun squirrel ran circles around the birds. Every now and then a giant forest squirrel would chase him out from the top branches and retain primacy in the rodent world. Red-tailed monkeys chittered at a lower decibel than the blue monkeys, peering out of the canopy with only the white putty of their noses visible through the leaves. And then quietly, almost serenely, a troop of colobus would take centre-stage. The largest of the monkeys, the black and white colobus hung from the trees in large, elegant clusters, their fringed shawls draped around them like Peruvian hill women. Impervious to the birdsong around them, they munched quietly and determinedly on leaves, not vocalising even while the impertinent red tailed and blue monkeys chattered simian gossip around them.

The cacophony of life in Kakamega could lead you, for a pleasant moment, to think all is well with the rainforests of the world. However, yearly, a forest chunk the size of England and Wales is being felled for advancing humanity. Scientists estimate that in the last 40 years, rainforests the size of Europe have disappeared and perhaps everything will vanish in the next 100 years. Currently the topic of discussion is what this will do to global warming. With carbon dioxide still trapped in our atmosphere, a forest-less future would lead to us baking due to temperatures that would need either superhuman adaptation or death. Standing in Kakamega, my thoughts however floated with the biodiversity high up onto the branches of a giant croton. What would happen then to the Ansorge’s greenbuls or the red-legged sun squirrel, I wondered. Would the colobus shed its mantle or the turacos its drooping blue wings before they perish, one by one, prey to the ever increasing heat? It was not in the Amazon that such thoughts of doom seemed all pervasive. It’s in the small fragments of rainforest—in Silent Valley in Kerala, the Atlantic rainforest in Currutiba and Kakamega in Kenya—that the fragility of these treasure houses hit home.

Suddenly the tall forest opens out into a grassy glade with a German name- Zimmermann, named after the evangelist ornithologist Dale Zimmerman. A quail bursts underfoot and stout cisticolas and yellow-mantled widow birds cling onto tall grass blades as if their lives depend on it. A slight breeze fans the afternoon heat, but the moment it stops the heat picks up again. We dive back into the moist interiors of Kakamega onto a loop leading back to the pump house trail- a short, steep trail that goes down to an old abandoned pump house now popular among birdwatchers for trying to spot the rare flufftail, a member of a primitive family of water rails, early in the morning or the red-chested owlet late at night. Neither seems to be up and about as we walk in. A couple of woodpeckers squabble over a nest hole with two dozen metallic black Stuhlmann’s starlings. A ground squirrel scampers past just out of reach of a swooping sparrowhawk. Large swallowtail and streamer-tailed hairstreak butterflies float like evanescent dreams. And then suddenly, from amidst the stillness of the treelands floats, a blue apparition. Its long legs dangle daintily in front, a longer tail trails the tailwind. A short dark Mohawk crests a bright red tipped yellow bill. The rest of the body is clothed in shimmering turquoise, a long cloak of azure blue. It is the largest of the turacos, the Great Blue, a shy resident of these rainforests. As we catch our breaths, the two birds decide to have a conversation. From either sides of the road, the dusk air is rent with a series of woodpecker-like rattles ending in rough, rasping croaks. Even the blue monkeys go silent as the turacos take over. Framed in the cathedral storeys of giant Elgon teaks, the birds take me back to the beginning of time, when only birdsong and monkey-speak would have resonated in the forests of Kakamega.