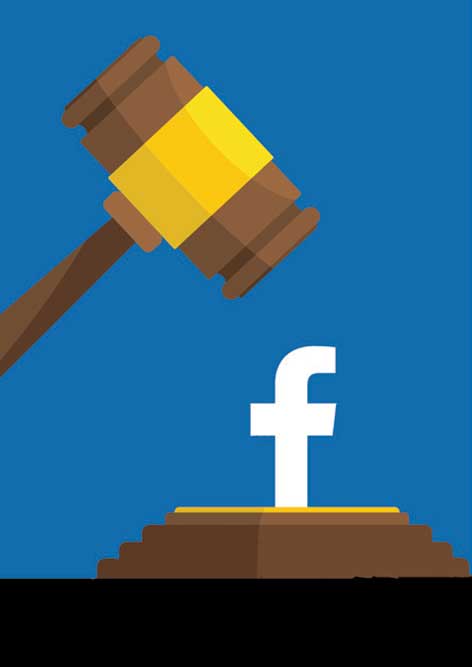 DISINFORMATION IS DESTINY. What propels the war on hate speech today is the rage against the business model of social media, especially Facebook. A front page report in The Wall Street Journal on how some BJP hatemongers get away with their crime on Facebook pages has brought this war to Indian politics. The report wondered: If Facebook could banish an anti-Semitic zealot of Black nationalism and an unhinged conspiracy theorist, what stops it from meting out the same treatment to demagogues from the Indian Right? The report implied that it tolerated them because India was Facebook’s biggest market, and the company’s public policy executive was soft on the Hindu cause. A Congress party general secretary wrote to Facebook CEO Mark Zuckerberg, demanding “transparency on hate speech.” Someone representing “the peace and harmony committee of Delhi Legislative Assembly”—Orwell still reigns as a semantic inspiration in the politics of social justice—wanted to summon senior Facebook management. No need to be alarmed: the parallel universe of social media, swarmed by trolls and traitors, is under attack by the last defenders of truth everywhere, from the US Congress to the Delhi Assembly. This war between the moral relativism of social media and the moral outrage of truth warriors does not redeem morality or truth.

At the outset, we need to concede that the Journal report was a fine piece of journalism that brought out the fact that a more vigorous social media content control—internal of course—can contain the hate that kills. The political reaction to the report falls into a pattern perfected in the aftermath of Donald Trump’s election in 2016. Those who questioned the legitimacy of his election attributed his victory to the mind controllers from Russian troll farms. They found in Facebook, the favourite medium of data sorcerers, a collaborator, a profiteering ally in the subversion of democracy. Even as moralists and equality activists put it on trial, and even as Twitter began to censor the president, Facebook refused to budge. It has refused to budge even when big advertisers, kneeling to the street in the post-George Floyd America, abandoned it. The progressives and their sympathisers in the media wanted the Facebook chief to be as socially conscious and politically appropriate as the Twitter chief. He doesn’t want to be there.

The anger against the new media is born of our fear of the message, its power, its pathologies, and its inauthenticity. It’s an old anger; only the nature of the medium has changed. The consumer is also the content provider. There is no passerby here; everyone is a participant, a gene in the ever-expanding media organism. The new media is a declaration of freedom and a struggle for domination. It empowers the ordinary lives outside media elitism; its sewage system feeds the troll. When a politician’s Twitter followers exceed the readership of a global newspaper, you know what liberation means, you know what unfiltered power means, and you know what the decoupling of truth and fact means. Every attempt to impose a moral code of conduct on social media smacks of moral dishonesty—and political desperation.

That desperation today demands moral homogeneity, which in turn makes hate speech and free speech interchangeable. In the US, the First Amendment makes it easier to offend, to market hate in the name of freedom, to argue without the safety of metaphors. The progressives and Trump-weary liberals are seeking the state to regulate social media because they expect truth to obey the ideological consensus of the public square. Facebook, in an otherwise liberal ecosystem of Silicon Valley, is a blasphemer, and refuses to be intimidated by the moral dictatorship of the progressives. That is only one part of the story. The other part is: Isn’t the distance between free speech and hate speech determined by the impossibility of definitions and the legitimacy of causes? There are moments when the digital troglodyte of religion campaigning for annihilation resembles a cruder version of crusaders “cancelling” out the bad eggs of the revolution. Some freedom fighters occupy the darkest recesses of moral depravity. Some float in the prevailing orthodoxy of freedom. Who will play the judge?

Certainly not the state. A lofty social media is the violation of the very freedom on which the system is built. It is the absence of both hierarchy and curation that makes social media what it is: home to instant evangelists and everyone with a message. The message hurts, divides, subverts, and even kills. It profits the new masters of the universe, the influencers of our impulses. If there is anyone who can—and maybe should—disturb the equality, it is the profiteer. Those who have turned us all into data owe us something in return: if not our lost humanity, at least a restoration of practical morality in the dishonest debate on free speech and digital responsibility.