The war may exacerbate geopolitical and economic fragmentation 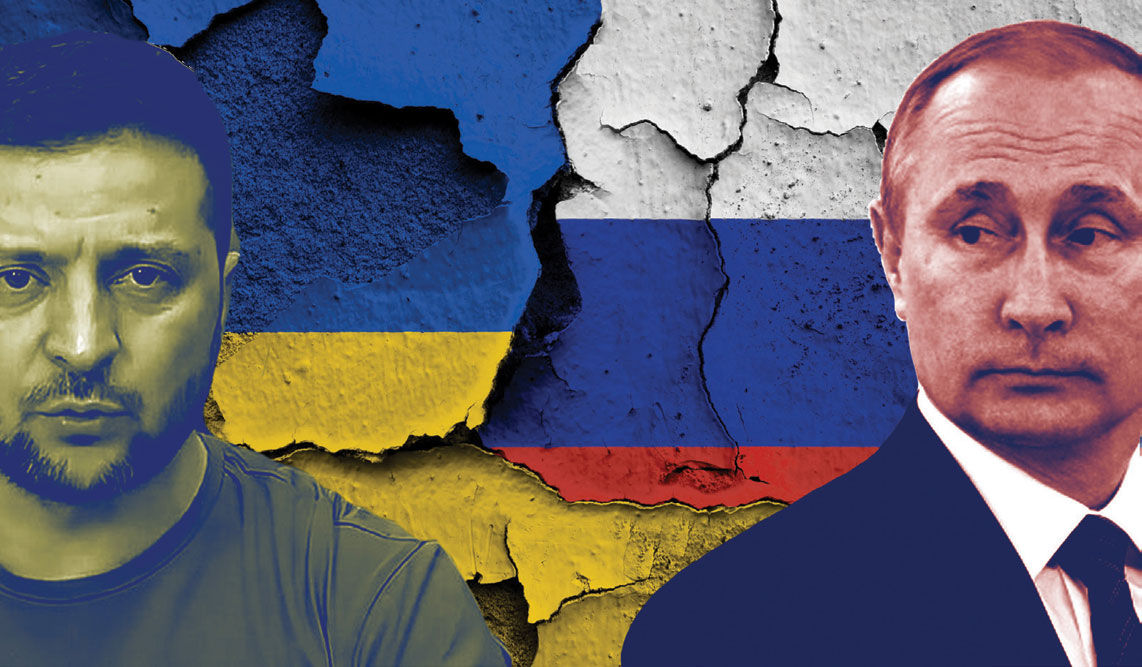 
THE RUSSIAN INVASION of Ukraine, with its confused objectives and inconclusive engagements, enters its third month. Although the final outcome of the Ukraine war is unclear, it provides pointers to some future realities.

The conflict represents the first major clash of an unfolding strategic competition in what is already a new Cold War. The eruption of smallscale proxy battles over the past decades had created an illusion that the chances of direct confrontation between big powers were minimal, but big powers still opt for power projection when they consider priority interests at stake. War therefore remains the ultimate yardstick in differentiating between friends and foes.

Russian power includes airstrikes, drones and missiles, as well as threats of nuclear weapons to deter NATO intervention. Ukraine is responding with asymmetric engagement, Javelins and Stingers, fintech platforms, cryptocurrencies and digital assets, highlighting the value of virtual war chests in contemporary warfare. The induction of special forces, foreign mercenaries and paramilitary irregulars on both sides is an additional complexity.

When the dust settles, it is unclear if the outcome will favour the Western bloc underpinned by American leadership, or the leading Eurasian power. Another question is whether rivalries in the new Cold War would be sharper than during its predecessor, particularly through the increased menace of nuclear armaments. The motive for Russia’s action was to alter Ukraine’s strategic orientation and refashion the architecture of European security, which appears not attainable through force. Yet, Moscow apparently thought that if costs were to be paid in economic resources, political capital, material losses and human casualties, the benefits would still be worthwhile. It ignored precedents such as Vietnam and Afghanistan, where the US was defeated despite overwhelming military, economic and technological superiority. A “frozen conflict” or de facto partition of Ukraine would be a fragile flashpoint prone to being overturned by counterinsurgency or partisan activity backed by intelligence, weapons, monetary and logistical support provided by NATO that would seriously damage Russian interests. Thus, even a Russian face-saving success could prove pyrrhic.

Manifold elements of coercion are being used by the West on a massive scale for the first time, involving energy, sanctions, finance and banking, with cyberspace, digital technologies and social media as a domain for disruption, sabotage, espionage and disinformation. These platforms involve a wide range of financiers, bankers, corporates, hackers and spin doctors.

Ukraine as battleground is in consequence of its location as a corridor that connects Europe with the Eurasian heartland, again underscoring the importance of geography as a driver of state behaviour. Ukraine has other substantial assets—agriculture, navigable waterways, warm water ports, infrastructure, demographics and mineral resources.

A united West seeks the exhaustion of Russian forces in Ukraine to weaken the main Eurasian power until it implodes, perhaps with an expectation that what remains could be used against China. But there is no predicting what might occur if the Russian Federation collapses. Scenarios involving turmoil, civil war, Balkanisation and terrorism, each with high degrees of unpredictability, should not be disregarded. The collapse of Russia is so problematic that most countries not allied to the West are reacting cautiously, though once there is a clear winner and loser, realignments could take place.

The Russian invasion deflects American attention from Northeast Asia but leaves China in a complicated predicament. China could enlist a weak Russia as a junior partner, or try to buttress Russia even though such support risks opposing its major trade partners, the US and EU. Its strategic agenda requires stability rather than counterproductive confrontations, so Beijing prefers ambiguity to buy time to build national strength and implement projects in order to position itself as the axial centre of a new Eurasian community.


Russia sees itself as the heir to the Byzantine empire, Moscow as ‘the third Rome’, bastion of orthodox Christianity, defender of Russian ethnicity and language, proponent of multipolarity, order and tradition. In this optic, the West is decadent, hedonistic, materialistic, hypocritical and arrogant

The invocation of a “rules-based order” that regulates governance and state behaviour is projected by the West on false assumptions. Collective rules can only be enforced with overwhelming coercive power and leadership backed by uncontested legitimacy and a strong multilateral consensus. These factors do not exist; there is currently no global assemblage within which identical values are shared.

The strength of nationalism worldwide, based on ethnicity, heritage, culture, religion, history and language, claimed as unique, is undiminished and will grow. For nationalists, loyalties are defined by collectives that exclude outsiders, who are considered either sympathisers or hostile. Threshold states with the ability to develop nuclear weapons are likely to re-examine their options and the Non-Proliferation Treaty will come under great pressure to remain relevant.

Contrary to West-curated propaganda, the Ukrainian “heroes” are not fighting for “democracy”. Russian aggression has made them disregard existing internal tensions in order to resist an enemy and develop a sense of unity in a country habitually characterised by extremism, violence, divisions, corruption and oligarchic power. Ostracism and economic hardship have not demoralised the Russian people either. Imposition of sanctions has generated popular resentment, and despite, or because of the absence of realistic data, Russians support the intervention in Ukraine and the approval ratings of President Putin have risen; 83 per cent in March compared to 69 per cent in January, according to the reliable Levada Centre.

Russia’s military attempt to reincorporate Ukraine in its geopolitical orbit has encountered resistance even from sections of eastern Ukraine that harboured Russophile attitudes. The transatlantic alliance also faces a dilemma from the Russian gamble—is Washington prepared to honour Article 5 of the NATO charter to come to the aid of every member state, and thereby take the risk of confrontation with a nuclear-armed rival?

The future cohesion of the West cannot be assumed because many European states are disinclined to further antagonise Moscow. Poland and Hungary will continue as outliers resistant to the precepts issued by Brussels. NATO’s eastward expansion has created a more problematic environment than just by providing a security shield. Under Franco-German leadership, the EU is an economic heavyweight but lacking the capacity to secure its own extensive geographical perimeter, and is therefore hostage to the rivalry between Russia and America. Its desire to reduce dependency on Russian energy has been announced, but replacing Russian gas will be expensive and not lead ipso facto to self-sufficient energy security.

The Ukraine invasion will lead to major economic shifts. States suffering from Western sanctions and those affected collaterally will seek to develop financial and monetary platforms and systems beyond the control of Washington and Brussels in order to challenge the US dollar as a reserve currency and bypass the current transnational financial arteries. Fragmentation of the global monetary and financial order may thus be expected. One aspect of this will be a retreat from globalisation and trends to mercantilism, which will adversely impact the growth of world trade.

Clashing self-perceptions of civilisation add fuel to the flames. The West sees itself as leader of the “free world”, champion of Enlightenment, exemplar of progress and guarantor of liberal democracy, free markets and human rights. Conversely, Russia is portrayed as an imperialist, backward, kleptocratic and repressive dictatorship. Russia sees itself as the heir to the Byzantine Empire, Moscow as “the Third Rome”, bastion of Orthodox Christianity, defender of Russian ethnicity and language, proponent of multipolarity, order and tradition. In this optic, the West is decadent, hedonistic, materialistic, hypocritical and arrogant. Such views advanced by each side are messianic and self-righteous, thereby rendering unbridgeable the chasm in mutual understanding.

Russia has stated an intention to proceed to an eastward orientation, a shift long advocated by Russian ideologues of Eurasianism, who urge the development of ties with China, India, Iran, Turkey, West and Central Asia, instead of vainly pursuing accommodation with the West. Such rebalancing would be difficult in view of Russia’s main security concerns, and would represent a radical departure from 300 years of history, starting with the efforts of Tsar Peter the Great to modernise Russia in accordance with European standards.