The Trial Then And Now

The polemics and pedagogy of The Trial of the Chicago 7 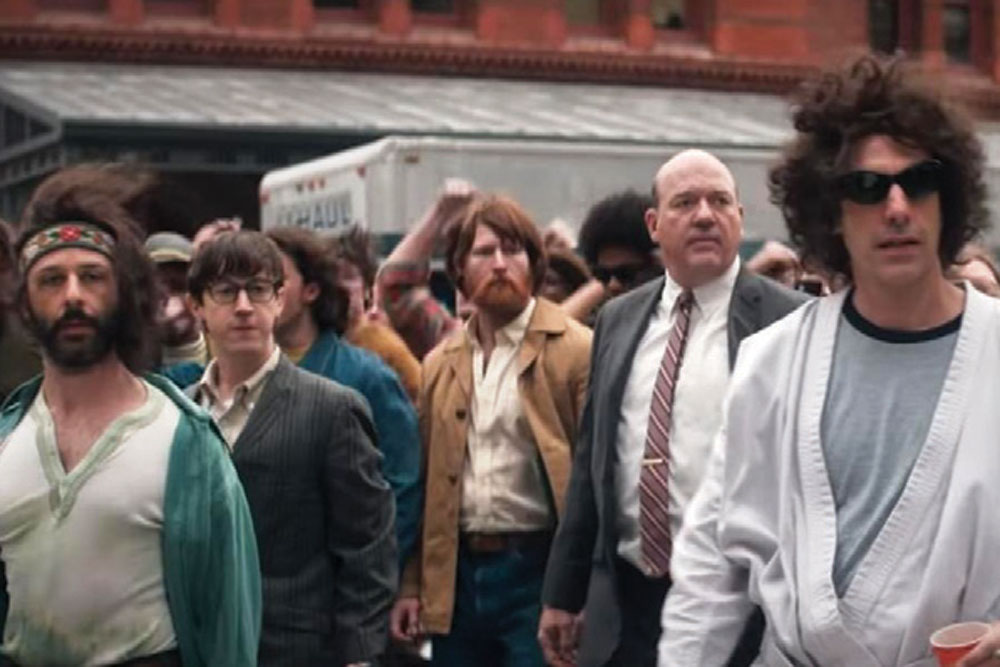 The Trial of the Chicago 7


BEFORE 2020, THERE was 1968. Then: The streets erupted in counter-cultural romance of what Le Monde called the “bored” generation. In Paris, they occupied universities and factories and invited Sartre for philosophical input—and old icons of communism were worthy of being there on the wall and the placard. That was a time when capitalism and imperialism were synonyms for evil, a time when the guardian of Gallic essentialism, Charles de Gaulle, had to temporarily flee the Republic. In the religion of protest, conscience conditioned by ideology was the only temple.

Elsewhere, in the United States, it was a war and an assassination that brought dissent to the street. Vietnam was the wrong war for a generation angered by the extra-territorial terror of the imperium, and the foot soldiers dying in the faraway swamps and jungles of Vietnam mostly came from the working class and the Black community. The war was not unsolicited martyrdom; it was sacrifice to please the wrong god. Then riots broke out after the assassination of Rev Martin Luther King Jr. The Republican candidate Richard Nixon campaigned on the platform of law and order—and would win. And at the Democratic National Convention in Chicago, the “rioters” included hippies, pacifists and ideologues. One year later, in the beginning of the Nixon era, their ordeal would come to be known as the Trial of the Chicago 7—the drama of youthful dissent and insensitive state staged in the backdrop of a culture war.

When you watch Aaron Sorkin’s The Trial of the Chicago 7, streaming on Netflix, in 2020, five decades after 1968, the distance in time is reduced by the mythology of protest, its morals and methods. The culture war is back, with the progressives in righteous rage set against the state without justice. Then it was the assassination of King that set the street on fire; in 2020 it was the death of George Floyd under the knee of a white policeman. Then it was Nixon who extolled the virtues of the strong state (“We see cities enveloped in smoke and flame”); today there is a Donald Trump, seeking re-election on law and order, to pull the presidential trigger, “When the looting starts, the shooting starts.” The cultural divide was as sharp then as it is today, with the dictatorship of correctness enforcing its own taboos in public discourse. The Trial of the Chicago 7 should be watched as a memorial service and a moral rejoinder, which is also an explicit directorial demand.

And the director being Aaron Sorkin, a courtroom drama becomes a verbal arena where the kinetic force of dialogues is matched by the moralism of the self-conscious idealist. As a scriptwriter and filmmaker (the repertoire includes The West Wing, The Newsroom and The Social Network), he is the polemicist of here-and-now, carrying within him an overabundance of headlines-driven rage. In The Trial, the dramatisation of moral crime and predetermined punishment parades the idealists, bigots and conspirators from the year that America believes it’s reliving today.

Here they are. The hippies, Abbie Hoffman and Jerry Rubin, played with comic irreverence by Sacha Baron Cohen and Jeremy Strong (of Succession) respectively, come to the court one day dressed as judges, and Hoffman never misses an opportunity to defy the system with some of Sorkin’s best lines. Tom Hayden (Eddie Redmayne), the ideologue, is a conflicted soul waiting for validation. He will have his moment, even if it’s at the expense of historical fact. Rennie Davis, David Dellinger, John Froines, and Lee Weiner complete the list of rebels accused of being the rioters of ’68. For a while they are joined by the Black Panther Party co-founder Bobby Seale (Yahya Abdul-Mateen II), without legal representation. When he stands up for his rights, he is gagged and chained to his seat, and the scene provides the film’s most eloquent reminder that racial dehumanisation is a constant in America’s trials. The defence attorney William Kunstler (Mark Rylance) argues with stoic restraint, and he is constantly undercut by the federal judge Julius Hoffman, a looming tower of conservative partisanship and a ruthless wielder of contempt-of-court order, brilliantly played by Frank Langella.

In the end, it doesn’t matter whether the judgment was custom-made for Nixon’s “spoiled rotten”. It doesn’t matter whether the seven would be acquitted by a higher court. It also doesn’t matter whether we all along knew that the riot was instigated not by the seven but the cops who put their badges inside their pockets before charging. What we are meant to know is that The Trial of the Chicago 7, even if we shuffle the text and context, retains its message in the age of angry streets and a president worse than Nixon. We are meant to remember that our conscience is still on trial in a world where the lies of the state continue to borrow from history.

The post-credits question is: What does it take for a filmmaker or a writer to let polemics and pedagogy diminish his art for the sake of social, cultural and ideological obligations?