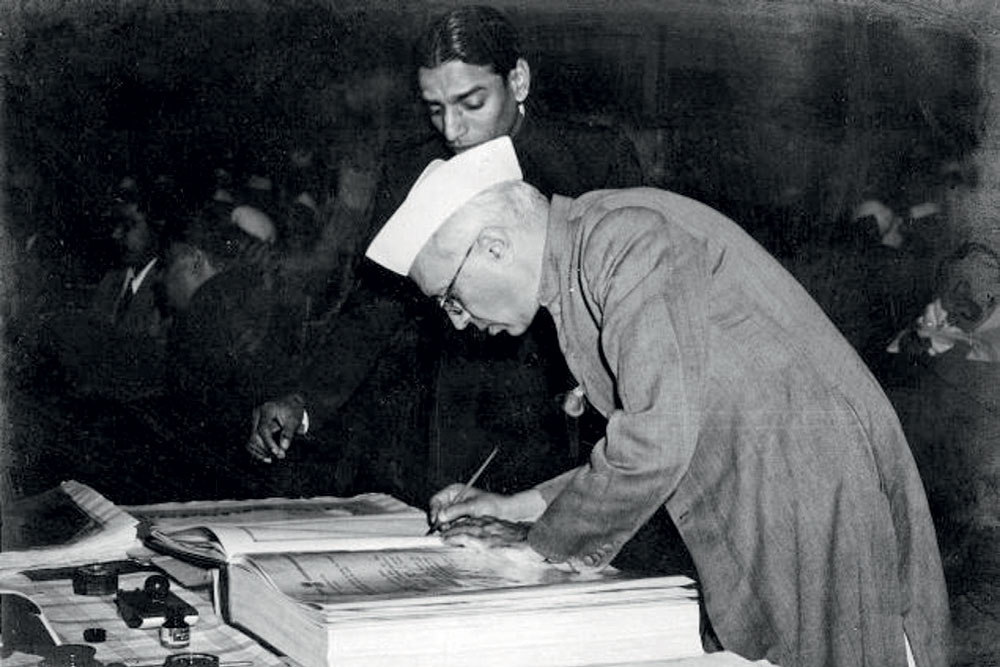 There was a twenty-year saga behind it which not many people know. Self-governance to India was a demand put forth by the Indian National Congress after Mahatma Gandhi’s ascendence. Towards that, certain constitutional reforms were demanded from the British. There existed two streams in Congress during that period—moderates and extremists. The extremists demanded “total independence” from the British, while the moderates were willing to work under the British paramountcy.

Interestingly, Gandhi was on the side of the moderates while Jawaharlal Nehru, who had returned from Europe in 1927 after attending the decennial celebrations of the Soviet Russian government as a committed socialist, sided with the extremists and demanded that the British Raj should end forthwith. At the Madras Congress session in 1927, Nehru got a resolution passed declaring Congress’ goal as “complete national independence.” Gandhi was not impressed at all. Six years earlier, at the Nagpur Congress session, too, Gandhi rejected the proposal for Poorna Swaraj (complete independence), mooted by leaders like Dr Hedgewar.

This time, Gandhi vented his anger saying: “The Congress stultified itself by repeating year after year resolutions of this character when it knows that it is not capable of carrying them into effect. By passing such resolutions, we make an exhibition of our impotence. We have almost sunk to the level of schoolboys’ debating society,” he chided Nehru and others.

Simon Commission was to visit India in 1928 to discuss the constitutional reforms for self-government. The Congress leadership was opposed to it on the ground that there was not a single Indian member in the Commission. Moreover, its proposal to grant dominion status to India was not acceptable to the extremists in Congress. As a result, the Commission had faced protests wherever it went. Enraged, the Commission taunted Congress to come up with its own Constitution. Not to be cowed down, the leadership had accepted that challenge and formed an All-Parties Conference under the leadership of Motilal Nehru for that task. The draft of the Constitution was soon ready in which it was categorically stated that—“Every person of either sex who has attained the age of 21, and is not disqualified by law, shall be entitled to vote.”

However, that draft, known as “Nehru Report” after its chairman, Motilal Nehru, had acceded to dominion status to the chagrin of many extremists in Congress, including Jawaharlal Nehru. A year’s time was given to the British government to accept the Nehru Report, failing which Congress had the option of returning to its Poorna Swaraj demand.

Viceroy Lord Irwin plunged into action to press London to accede to the dominion status for India. A round-table conference of Indian leaders was called in London to discuss dominion status and draft a Constitution. Nehru and Subhas Chandra Bose, two leaders of the Garam Dal—an extremist section of Congress—resigned from the Working Committee protesting dominion status. After Gandhi entered into an agreement with Viceroy Irwin, known as the Gandhi-Irwin Pact, under which several concessions were given to Congress, the extremist leaders were persuaded to withdraw their resignations and return to the Working Committee. 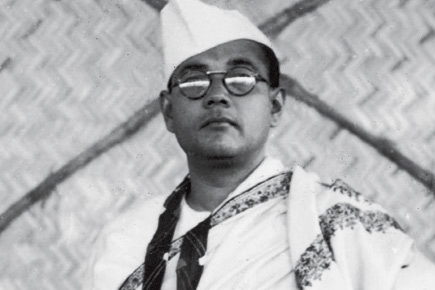 In 1929, the annual Congress session was held in Lahore under the presidentship of Jawaharlal Nehru. Poorna Swaraj was once again declared as the sole objective of Congress. All-out war was declared against the British in the name of the civil disobedience programme. As a first step, all the Congress legislators in provinces and at the Centre were asked to step down. 178 of them had immediately responded by resigning.

January 26th, 1930 was declared “Independence Day” and a call was given to celebrate it nationwide. Thousands of meetings were held across the country on that day. A solemn pledge was taken by lakhs of people, which said: “It is the inalienable right of the Indian people, as of any other people, to have freedom and to enjoy the fruits of their toil.” It further said: “If any government deprives a people of these rights and oppresses them, they have a further right to alter it or abolish it.”

Later, at the Karachi session in 1931, Congress had passed a resolution on “fundamental rights.” Described as “a minimum programme” for Congress, it guaranteed such freedoms like expression, religion, thought and assembly; equality before law irrespective of sex, creed, or caste; protection to regional languages and cultures; minimum living wages, limited hours of work and old-age insurance for industrial workers; safeguards against unemployment; abolition of untouchability; universal adult franchise; free primary education; prohibition; state control and management of key industries and services; and importantly, the establishment of a secular state. After a few years, in 1937, Nehru formed various committees of experts to work on India’s planning. Out of that emerged the National Planning Committee with Nehru as its chairman. A planned economy, the socialist model, was thus set in motion by Nehru tern years before the Independence of the country.

It was in remembrance of January 26th, 1930 that Nehru had chosen January 26th, 1950 as Republic Day. While that day finally ended the three-year dominion status of India and transformed it into a full-fledged republic, many of the aspects of the two-decades-old “minimum programme”, too, found a place in the Constitution of India adopted on that day. A Planning Commission, with Nehru as the chairman and PC Mahalanobis, a statistician as its key member, also came into being almost simultaneously.

Interestingly, the 20-year hiatus was not without events. The Naram Dal and Garam Dal (moderates and extremists) continued to battle it out through various stages of the freedom movement during that period. Gandhi, who did not live to see the country turning republic in 1950, was there trying to play the role of the balancer during those eventful years of the run-up to India’s freedom. He was not always too pleased with Nehru’s aggression and impatience. “Differences between you and me appear to be so vast and so radical that there seems to be no meeting ground between us,” he told Nehru on one occasion. On his part, Nehru, too, had openly lashed out at Gandhi on more than one occasion conveying his disagreement in a youthful manner. But in the end, the two never truly broke up. “No amount of political differences will ever separate him from me,” Gandhi told Patel once.

January 26th, 1930 was Nehru’s triumph over the moderates like Tej Bahadur Sapru and MR Jayakar. His own father Motilal, too, was moderate, but he did not live long after the Nehru Report. Subhas Bose was on Jawaharlal Nehru’s side in 1930. Sardar Patel began on friendly terms with Nehru as the latter fully supported him during the Bardoli Satyagraha in 1928, which was in a way the beginning of Patel’s Congress career, but soon grew disillusioned with Nehru’s radical ideological moorings. So were other seniors like Rajendra Prasad and Jamnalal Bajaj. At one point in 1936, six senior leaders, including Rajendra Prasad, Sardar Patel, and C Rajagopalachari had resigned from the Congress Working Committee protesting the “preaching and emphasising of socialism” by Nehru who was the Congress president at that time. Nehru countered their resignation with the threat of his own resignation. Gandhi, as usual, intervened to pacify both groups.

Nehru and Patel hardly got along during those two decades, but Patel for one, as an elderly statesman, never allowed his differences to overshadow the larger Congress mission. And there was Gandhi, always trying to convince the fellow Gujarati to step back and allow the “rightful helmsman of the Congress”—as he described Nehru—to move on with his agenda.

To his credit, Nehru was determined that India should at no cost agree to any subservient status under the British. Although he worked with his Congress colleagues under various programmes devised by the British, he never gave up his goal of “complete independence.” He also dismissed the Government of India Act of 1935 as a “slave Constitution.” Although forced by his colleagues to join the Viceroy Wavell’s Executive Council in 1946, he never showed any enthusiasm. When the naval mutiny broke out at Bombay and Karachi, Nehru openly supported the mutineers calling them a “fine body of young men.” When the trial of the Indian National Army (INA) began at the Red Fort, Nehru was there in defence of the INA, wearing the long-discarded lawyers’ robe once again.

Finally, the Constituent Assembly met for the first time on December 9th, 1946. With Muslim League boycotting it, the Assembly turned out as Partitioned India’s body. Moving the Objectives Resolution, Nehru declared that “the first task of this Assembly is to free India through a new Constitution… and to give every Indian the fullest opportunity to develop himself according to his capacity. It is a resolution and yet it is something much more than a resolution. It is a declaration. It is a firm resolve. It is a pledge and an undertaking, and it is for all of us, I hope, a dedication,” he passionately proclaimed.

It was that dedication, of 299 members who sat over 114 days spread over two years, 11 months, and 18 days, that had resulted in the making of one of the world’s largest and most comprehensive of constitutions.

Ambedkar, as the chairman of the Drafting Committee, delivered his final address on November 25th, 1949. It remains one of his best oratories in history. His closing comments must continue to ring in our ears always:

That is the only way to serve the country. I know of no better.”