It is Shiva’s form and purifies the three worlds 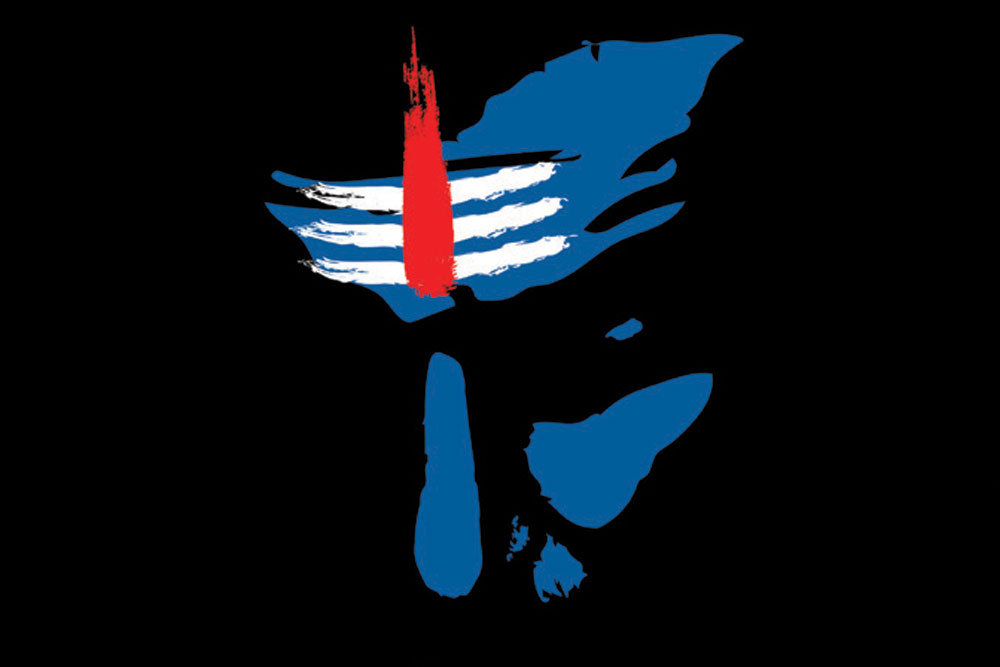 
IN THE LAST column, I mentioned bhasma and Tripundraka, the three horizontal lines made on the forehead with bhasma. Most of us are unfamiliar with the finer details. I am going to fill in those finer details from the Shiva Purana. I am deliberately stating these within quotes. Anything within brackets is not from the text and is for purposes of explanation.

“There are three lines that are made. It should start from the middle of the eyebrows and extend to the end of the eyebrows on either side. To make the Tripundraka, another line of the same dimension is drawn on the forehead. In between, using the middle and the ring finger, a line is drawn in the opposite direction. A line drawn with the thumb is also known as Tripundraka. Alternatively, the three middle fingers can be used to carefully take the ashes and draw three lines. If one wears Tripundraka faithfully, one obtains objects of pleasure and emancipation. There are nine devas associated with each of the three lines and they are located on different limbs. Mahadeva is the divinity for the first line, which stands for ‘A’, the garhapatya fire (the fire that burns in every household), the earth, dharma, the guna of rajas, the Rig Veda, the power of kriya and the morning savana. (Savana is three times a day (morning, noon and evening), when an offering of soma is made.) Those who are devoted to taking diksha about Shiva should know this. Maheshvara is the divinity for the second line, which stands for ‘U’, dakshinagni (the fire that burns in the southern direction, space, the Yajur Veda, the power of iccha (willpower), the jivatman inside and the savana at mid-day. O tigers among sages! Those who are devoted to taking diksha about Shiva should know this. Shiva is the divinity for the third line, which stands for ‘M’, the ahavaniya fire (the fire used for sacrifices), the paramatman, the guna of tamas, the firmament, the power of jnana, the Sama Veda and the third savana. In this way, full of devotion, one must always do namaskara to the divinities of the locations and then wear Tripundraka. One will then be purified and obtain objects of pleasure and emancipation”. But Tripundraka isn’t only about the forehead.

“I have spoken to you about the divinities located in the different limbs. The nyasa must be done in thirty-two places, sixteen places, eight places or five places. The thirty-two excellent places are the head, the forehead, the two ears, the two eyes, the two nostrils, the mouth, the neck, the two arms, the two elbows, the two wrists, the chest, the two flanks, the navel, the two testicles, the two thighs, the two knees, the two calves, the two heels and the two feet. In these places, when wearing Tripundraka, the learned will mention the names of fire, water, earth, wind, the directions, the lords of the directions and the Vasus. (Ten directions, ten lords of these directions and eight Vasus.) The eight Vasus are said to be Dhara, Dhruva, Soma, Apa, Anala, Anila, Pratyusha and Prabhasa. One can also apply Tripundraka in sixteen places—the head, the forehead, the neck, the two shoulders, the two arms, the two elbows, the two wrists, the chest, the navel, the two flanks and the back. The names of the divinities to be established there are the two Ashvins, Shiva, Shakti, Rudra, Isha, Narada and nine Shaktis, Vaamaa and others. (Usually, the nine Shaktis are listed as Kushmanda, Mahagouri, Kalaratri, Siddhidatri, Katyayani, Brahmacharini, Shailaputri, Skandamata and Chandraghanta.) These are the sixteen divinities. The names of the two Ashvins are said to be Nasatya and Dasra. Alternatively, the sixteen places are the head, the hair, the two ears, the mouth, the two arms, the chest, the navel, the two thighs, the two knees, the two feet and the back. The sixteen divinities are said to be Shiva, Chandra, Rudra, Brahma, Vighnesha, Vishnu, Shri in the heart, Shambhu, Prajapati in the navel, Naga, Nagakanya, the two Rishikanyas in the two feet and the extensive ocean at the back. These are the sixteen tirthas. The eight places are said to be the private parts, the forehead, two ears (the ears are probably counted as one.) Otherwise, there would be nine places, the two shoulders, the chest and the navel. The divinities are said to be Brahma and the seven rishis. Alternatively, knowledgeable people wear the bhasma in five places—the head, the two arms, the chest and the navel. Remembering Shiva, Tripundraka can be applied on the forehead alone, chanting “Namah Shivaya”. Tripundraka can be applied to the sides, chanting “Ishabhyam Namah”.


Bhasma is the most sacred of the tirthas and if a man bathes with it, he obtains fruits that are equal to fruits obtained by bathing in all the tirthas

“No man should eat a little bit of food, or drink a little bit of water, without applying bhasma or wearing rudraksha. Whether he is a householder, a forest dweller, a mendicant belonging to a varna or an outcaste, if he does this, he goes to hell. In this event, a person from the varna system will be liberated when he performs japa with Gayatri Mantra. A mendicant is freed with Pranava. A person who criticises Tripundraka, actually criticises Shiva. Those who faithfully wear it, actually wear him. Shame on the forehead that is devoid of bhasma. Shame on the village that is devoid of a Shiva temple. Shame on a birth that does not worship Isha. Shame on accounts that do not seek refuge with Shiva. Maheshvara Hara is the support of the three worlds. It is a sin to see a person who criticises him. It is a sin to see a person who criticises the wearing of Tripundraka. Such people are sinners and are only destined for hell. They are born as those of mixed varnas, pigs, asuras, donkeys, jackals and insects. They do not see the sun or the moon during the day or night. They only see nightmares. If a foolish man criticises the wearing of bhasma, it is a true statement that such a person is destined for hell and has no salvation.”

In the course of translating Shiva Purana, I read a text I had never bothered to read before. It is quite remarkable and is known as the Brihad Jabala Upanishad. It is a text devoted to bhasma and Tripundraka and is spoken by a descendant of sage Jabali.

“The Brihad Jabala Upanishad has said that there are many worlds to be obtained. Taking that into consideration, efforts must be made to wear bhasma. Just as sandalwood paste can be applied on top of sandalwood paste, more bhasma can be applied on top of the Tripundraka ash. However, an intelligent person will not wear anything else over the vibhuti applied on the forehead. Women will wear the ashes on the forelocks of their hair and this is also true of brahmana widows. Those in the ashramas must always wear the vibhuti. It destroys all sins and bestows the fruit of final emancipation. Following the norms, the ashes must be used to make a Tripundraka mark. A person who does this is freed from a multitude of major and minor sins. In particular, a person who wears bhasma is freed of the following sins—killing a woman or a cow; killing a hero; killing a horse; stealing the possessions of others; outraging another person’s wife; criticising others; stealing another person’s field; oppressing another; stealing crops and pleasure grounds; arson of a house; accepting gifts of cattle, gold, buffaloes, sesamum, blankets, garments, cooked food, grain and water from those who are inferior; having intercourse with public courtesans, intoxicated women, vrishalis and dancers; having intercourse with women who are going through their season, maidens and widows; the sale of flesh, hides, juices and salt; calumny, false arguments and perjury and love of falsehood. There are many such innumerable sins. As soon as Tripundraka is worn, these are instantly destroyed.”

There are tirthas in this world, Ganga and other rivers. If a person wears Tripundraka on his forehead, he obtains the good merits of bathing in all of these. A person who wears Tripundraka saves one thousand predecessors and one thousand successors in his own lineage. After considering the essence of all the Upanishads repeatedly, this is the determination that has been arrived at. Tripundraka is the best. To get rid of filth, one bathes with water. A bath with bhasma always purifies. Bathing with mantras takes away sin. Bathing with jnana takes a person to the supreme destination. Bhasma is the most sacred of the tirthas and if a man bathes with it, he obtains fruits that are equal to fruits obtained by bathing in all the tirthas. Bathing with bhasma is a supreme tirtha, as if one is bathing in Ganga every day. Bhasma is directly Shiva’s form. Bhasma purifies the three worlds. If a man controls his mind and always wears Tripundraka, he is known as Shiva’s devotee.”