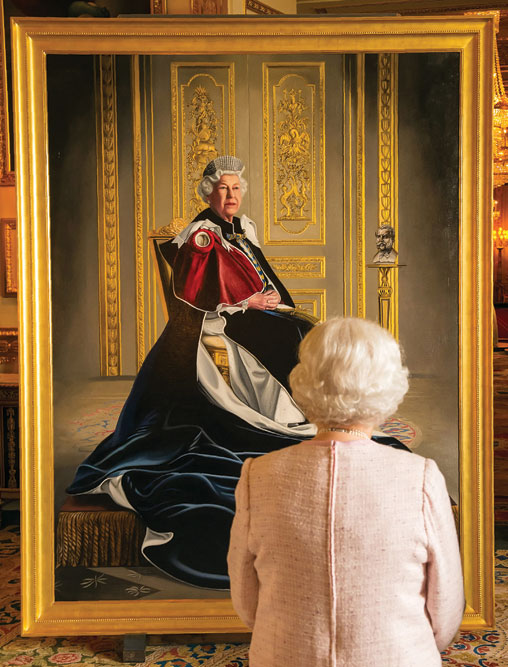 Queen Elizabeth II views a painting of herself by Henry Ward at Windsor Castle, 2016 (Photo: AFP)


A FEW WEEKS AGO, posters started materi­alising all over London, showing a discreetly soft-focused, benignly smiling, coiffed old lady. Aside from those posters, not a great deal had changed on the ground in the city. Baristas were still selling eye-wateringly expensive concoctions with alternatively milked beverages, as people began to huddle in companionable groups at the roadside cafes, indulgently waiting for autumn as the sun swung into the September equinox. The immoderate laughter of patrons was just as strident under the wispy, late flowering geraniums in the hanging baskets of the pubs. The city jangled, clattered and spangled with its usual energy and dreams.

Entirely coincidentally, at exactly the same time, the British Museum had an exhibition titled Feminine Power, exploring the different ways in which female power has expressed itself in the countless cultures of the world. Here in the hushed, temperature-controlled rooms of the museum were terrify­ing chimaera creatures, gorgeous beauties, slithering snakes and mermaids, as museum goers gawped at the many ways in which societies through the ages have tried to exorcise and control female power. This, then, was elemental and visceral power, exulting in the fertility, beauty, magic and untamed free­dom of the female being. And in its fearsome, sometimes blood-spattered incarnations these representations were completely unlike the 5 foot 3, pastel clad, timidly smiling elderly woman who had so dominated the global press for the past few weeks.

But as the days went by, a gentle swell morphed into a power­ful current and a strong emotion gripped the usually reticent British public. Phrases like, “she was like our mum” or “she was everyone’s granny” have been bandied about with breathless frequency in news clippings, conjuring up an image of placid maternal affection which was a far cry from the entirely un­fathomable power of the female deities in the British Museum. For what the Queen possessed, and was able to exercise with remarkable skill, secrecy and pragmatic calculation, was ‘soft power’, a form of power most often associated with female potentates. As Professor Anne Twomey has pointed out, clear emotional bonds can be formed between monarch and subjects generating subjective responses such as “love, affection, admira­tion or trust,” all of which constitute a more “feminised” kind of power. What is fascinating is that in some instances, that power is in fact enhanced rather than thwarted by gender. For example, when Queen Elizabeth’s great grandmother Queen Victoria became queen when she was only a wisp of a girl, 18 years old, al­most all of her entirely male privy councillors were left in manly tears at the sight of a fragile young woman taking on the burden of sovereignty. One doubts there would have been quite as many sniffles had the new monarch been a ruddy, be-whiskered man. Instead, it was deemed chivalrous to look out for the young woman monarch, the occasion appealing to a quintessentially “gentlemanly” code of conduct that demanded protective re­spect for the Queen. Twomey further points out that in our day, as it was for Queen Victoria, it was regarded as ungentlemanly for a politician to impose his will on a female monarch “when she is young, a mother, or elderly,” which rather conveniently covered every avatar of Queen Elizabeth II’s 70-year reign.

For the Queen, and indeed the British royal family, are not simply a quirky vestigial presence from more majestic times. They are meant to represent the best, or at least the most eccentric, of British culture. They are believed to proudly symbolise what was called, in an ill-advised rush of confidence a few decades ago—“Brand UK”. The royal family represents a very select form of Britishness, alongside excessive politeness and accents clipped like a yew hedge. They symbolise what is thought of as quintessentially British things like scones and marmalade sandwiches, horse-riding, hunting, and polo, all of which the Queen promoted effortlessly.


Much before women like Angela Merkel and Michelle Obama used bright block colours to stand out from powerful men around them, the Queen used skirt suits with matching hats, shoes and bags in colours like virulent green and shrimp pink to be instantly recognised

The Queen was also known to exercise gentle diplomacy, in the most subtle and understated of ways. In 2003, for example, when the Queen personally drove the then Crown Prince of Saudi Arabia, who did not approve of women driving, she was making a political statement, albeit in a most covert way since she was not allowed to be openly political. Another cherished instance was the Queen’s role in supporting Nelson Mandela and the end of apartheid in South Africa. When Mandela walked into a formal gathering before he was head of state, the Queen invited him to join the dinner of world leaders, hastily having a place laid out for him. The Queen had recognised his importance in South African politics, and proceeded to impress Mandela with her knowledge of politics in southern Africa. Amusingly, the association of the Queen with certain British icons was not without consequence. Because of the Queen’s near obsession with Welsh corgis for instance ( bat-eared, stretch limousine shaped dogs), their popularity soared abroad. Indeed they are now the 11th most popular dog breed in the United States.

The Queen’s soft power was often exercised in sartorial ways, her clothes and image carefully curated to project an easily recognisable image of constancy, pragmatic femininity and visibility. The Queen’s namesake Elizabeth I was extraor­dinarily aware of the power of her image. A famous portrait depicted her wearing a gown embroidered with ears and eyes, underlined the none-too subtle message that the monarch, like Big Brother, was always watching you. Queen Elizabeth, instead, has used pastel and block colours like other women have used pant suits—as power dressing. Much before women like Angela Merkel and Michelle Obama used bright block colours to stand out from powerful men around them, the Queen used skirt suits with matching hats, shoes and bags in colours like virulent green, and shrimp pink to be instantly recognised, her tiny figure dazzling from a distance among a sea of dark suited guards and men. The Queen often had a tiny symbol on her clothes containing a coded message—a moss agate brooch gifted by the Obamas worn during the 2019 visit by Trump to the UK, a jade green outfit in 2011 for the first visit by a British monarch to the Irish Republic. As she grew older, the Queen shifted to more flattering pastels, from the rather more lurid tones of her earlier reign. But bright or muted, the Queen used constancy as her most powerful weapon, and through her long reign she could always be relied on to charm heads of states around the world.

What is remarkable is that the Queen had also been exposed to scandal and notoriety, through her family if not personally. The publication by the beloved Princess Diana of a memoir that exposed the sordid underbelly of palace politics in 1992 led to so much backlash against royal sentiment that the Queen called it her “Annus Horribilis”. More recently, there has been scandal over the association of her favourite son Prince Andrew with the sex offender Jeffrey Epstein, and resentment over the way in which extreme secrecy was used to cover the fact that the Queen profited from tax breaks to hide the true cost of the royal household from the public. Overseas too, murmurs have grown louder about the way in which British royalty has profited from Em­pire, and cannot be extricated from the genocide, racism, slave trade, looting and other horrors associated with it. After all, the British crowns and sceptres are studded with diamonds, includ­ing the Koh-i-Noor, wrested from their blood drenched ex-colonies who, in some instances, are angrily demanding them back.

But despite all of this, expressions of love and affection for the Queen have steadily gained traction over the days leading to her funeral. Perhaps in a time in which the British people are faced with enormous uncertainty about their place in the world post Brexit and post Covid, and the erosion of what many feel are ‘British values’ in an increasingly globalised world, the Queen was a symbol of all that was beloved, now lost forever. In an alchemical sleight of hand, there was a conflation of love and loss, so that what the British public is now mourn­ing is not simply the loss of a monarch, but perhaps an aware­ness that the sun has finally set on the British Empire.