The Roots of Hallucination

Consciousness-altering plants in the cultural history of India 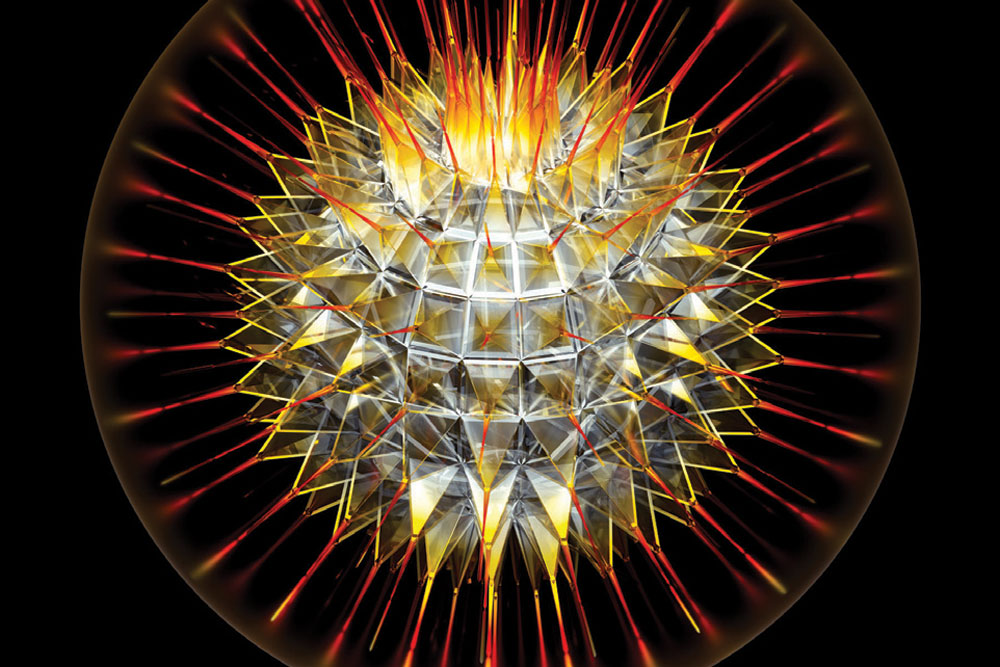 
WE IN INDIA have an ancient relationship with hallucinogenic plants. We have grown up with stories about soma, the nectar gods and asuras churned from the heavenly sea. In the guise of Mohini (a beautiful damsel), Lord Vishnu gave soma to the gods but not to the asuras. Soma’s origins have triggered scholarly debates. Some say it is the fermented milky sap of Asclepias acida, a kind of milkweed. Others think it was a mushroom, Amanita muscaria, whose hosts are the birch and conifer trees in the Himalayas. Others point to the Rig Veda, which speaks of three filters to purify and prepare soma for sacramental use. Whatever the source, the psychedelic nature of soma and its sacredness is not in dispute. Another sacred hal­lucinogenic plant is datura (white thorn apple), an aphrodisiac and poisonous. Its flowers are used to worship Lord Shiva. Paan, traditionally chewed after a meal, contains a hallucinogenic, the betel nut. Bhaang drunk during Holi is made of cannabis. Opium poppies grow in our gardens as do Ipomoea violacea (morning glory which contains tryptamine similar to LSD) and San Pedro cactus (produces mescaline).

What do these psychoactive plants do to our consciousness, asks Michael Pollan in his new book This Is Your Mind on Plants. The three essays in the book focus on three plant-derived drugs. The downer or sedative (opium), the upper or stimulant (caf­feine) and the outer or hallucinogen (mescaline). He argues that our relationships with these three hold up mirrors to our deep­est human needs and aspirations, the operations of our minds and our entanglements with the natural world.

Each has a different impact on our consciousness, a differ­ent degree of state paranoia and a different type of regulation. The drugs deemed illicit are “typically those with the power to change consciousness in ways that run counter to the smooth operation of society.” The debate around when growing an opium poppy in a garden becomes illegal in the US is the subject of Pollan’s first essay. The war against drugs was at a high pitch then, and the lawyers told him to delete a section before it was printed in Harper’s. One gets a glimpse into the political underpinnings of the US’ war against drugs. He cites John Ehrlichman, President Richard Nixon’s domestic policy advisor: “You want to know what this was really all about? [The Nixon White House] had two enemies: the anti-war left and black people… We knew we couldn’t make it illegal to be either against the war or black, but by getting the public to associate hippies with marijuana and blacks with heroin, and then criminalising both heavily, we could disrupt those communities… Did we know we were lying about the drugs? Of course we did.”

The reverse is also true: that those that help the smooth functioning of society are actively promoted. Caffeine is a prime example of how the global coffee culture “helped bend humanity to the wheel of the Machine and the requirements of a new economic and mental order.” The particular quality of consciousness caffeine induces in the regular user feels not so much altered or distorted as normal and transparent, says Pollan. Ironically, it was an uphill battle for the British colonialists to promote tea and coffee consumption in the early to mid-20th century in India. Through self-experimentation (he stopped having coffee for three months) and a whistle-stop history of how coffee gripped the global imagination, Pollan illuminates the consciousness-changing aspects of caffeine. Feeling that he had lost a mental step since getting off coffee and tea, Pollan asks: Does caffeine make people faster and smarter? Citing studies, he shows that caffeine makes us faster but not necessarily smarter. It may improve mental performance to some degree. Still, creative folks, note this: it may not enhance creative performance, which needs a different kind of focus. Cognitive psychologists call this lantern consciousness, in which attention illuminates a broader field of awareness. Young children tend to exhibit this, as do people on psychedelics. But caffeine promotes a spotlight consciousness, a single focal point of attention, making it very good for reasoning.

But other anecdotes show a more creative side to caffeine. Pollan points out that the culture of coffee houses brought the rhythm of spoken English to the prose of Fielding, Swift, Defoe and Sterne. Voltaire was supposed to have drunk about 72 cups of coffee a day!

The addictiveness and behaviour-changing aspect of coffee is not confined to humans. Plants have discovered that they can attract pollinators like bees by offering a shot of caffeine in their pollen and even in their nectar. By sharpening the bee’s memory, caffeine makes it return to the same plant again and again. To discover if that is indeed the case, Geraldine Wright trapped honeybees and, using a medicine dropper, fed them mixtures of sugar water with and without different concentrations of caffeine. Her bees were more likely to remember the odour associated with caffeinated nectar over the odour related to sucrose only.

Are we humans too, like bees, duped by clever caffeine plants to do their bidding against our interests, asks Pollan. The soda makers certainly trick us into buying their products against our health interests. The six top-selling brands in the US contain caffeine (as much as in a cup of tea). We pay the price in a reduced quality of sleep, less REM or slow-wave sleep. Remember this the next time you meet someone who says they can drink espresso at midnight and fall asleep immediately. 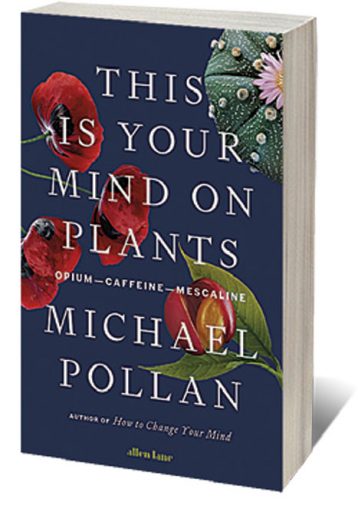 If legality focuses on the ingredient’s addictiveness and consciousness-altering qualities, opiates constitute a significant threat to us. The chief culprit in the current opiate epidemic is not a virus or even the illicit drug economy, says Pollan. It is a corporation, which had begun marketing a slow-release opiate called OxyContin in 1996. More than 230,000 people have died by overdose, and thousands of addicts to the painkillers have emerged. Four out of five new heroin users used prescription painkillers first, which of course, are not banned. In India, a 2019 AIIMS study found that over half the people, mainly in the 16-25 age group, with opioid disorders come from Delhi, Maharashtra, UP, Punjab, Haryana, Rajasthan and Andhra Pradesh.

The three essays in the book focus on three plant-derived drugs. the downer or sedative (opium), the upper or stimulant (caffeine) and the outer or hallucinogen (mescaline)

The third essay is devoted to mescaline. Opening the doors of perception, Aldous Huxley said of his first experience with mescaline. Having taken two capsules of mescaline, Pollan describes the opening door of perception. He looked at “the dark blue water, at the yellow heads carving lines through it, at the grain and stains in the cedar boards cladding the house… I was a helpless captive of the present moment.” Unlike LSD, where the objects of our attention can come to life and transform, and with datura, where they transform into the most horrific nightmares, with mescaline, the objects do not change.

WHILE READING POLLAN, it struck me that unlike the predominantly legal conversations around psychoactive plants in the US, these consciousness-altering plants are entwined with India’s cultural and religious history. The British were bewildered at the free and easy way the natives dealt with cannabis. Alexander Macaulay Markham writes in 1874 in his report on Bijnor and the North-Western provinces that the wild Indian hemp plant is produced in great quantities all over the forests and in the open countryside and is used in native medicine as a narcotic, an anodyne and an antispasmodic. “The dried leaves are also pounded and mixed with spices and water, and make a popular intoxicating drink, which the lower classes chiefly used during the Holi festival.” Before him came a Scottish chemist William Brooke O’Shaughnessy in 1842, who studied how Indians used cannabis since the British feared that cannabis would cause madness. O’Shaughnessy interviewed his Indian colleagues on the subject and reported it in The Bengal Dispensatory. Even more fascinating is his description of how the resin from the hemp plant is collected. “Men clad in leather dresses run through the hemp fields brushing through the plant with all possible violence; the soft resin adheres to the leather, is subsequently scraped off, and kneaded into balls.”

Today, this hangover from the colonial fear of cannabis remains cheek by jowl with the free and easy way of the traditional attitude. Cannabis smoking (the buds and resin) is mostly banned, but eating the leaves in sweets and drinks is not prohibited. Bhaang ki patti ka peda is still eaten during Holi. The consumption of bhaang and charas is part of the religious experience of Shaivite Naga Akharas, evident in any Kumbh Mela. Bhaang, as O’Shaughnessy notes, produces an intoxication of the most cheerful kind, causing the person to sing and dance and to eat food with great relish. There is a movement towards legalising some psychoactive plants. Uttarakhand legalised the commercial production of marijuana. Pollan succeeds in making us see the historical and political nuances of how we perceive these consciousness-altering plants.