The Right Not to be Killed 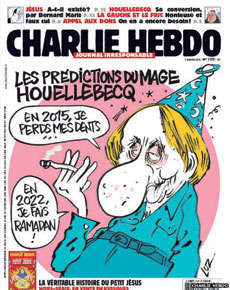 IN RECENT TIMES, at least, the satirical magazine Charlie Hebdo deciding to republish the cartoons of Prophet Muhammad must be the most courageous stand for freedom of expression one can think of. In 2015, after the first publication of these cartoons, two armed men claiming to be members of Al-Qaeda, had entered their office and shot dead 12 employees. Just before the trial of the other accused—the shooters were already killed—in that shooting was to begin, they republished all the cartoons again in its latest issue. A BBC News report on it said: ‘The French headline reads “Tout ça pour ça” (All of that for this). In its editorial, the magazine says that it has often been asked to carry on printing caricatures of the prophet since the 2015 killings. “We have always refused to do so, not because it is prohibited—the law allows us to do so—but because there was a need for a good reason to do it, a reason which has meaning and which brings something to the debate,” it says. “To reproduce these cartoons in the week the trial over the January 2015 terrorist attacks opens seemed essential to us.”’

It is important for a couple of reasons. It reinforces the argument that free secular societies—or, in an ideal world, any society—shouldn’t be hostage to religion. It might be decent and kind to not want to deliberately offend a community but should anyone do that, then murder in retaliation shouldn’t be a justifiable position. Pragmatic people will not want to test this principle in many places. Even in India, every state has venerated figures cutting across religions against whom anything derogatory has often led to riots and assaults and it would be a brave Indian liberal who would try to check the limits of his free expression. He would just get beaten up and the police would register a case against him instead. Therefore, when a magazine at any part of the world invites more terrorist attacks after almost its entire staff was murdered, one must at least applaud wherever one is.

There is then the question of the direction that one would want societies to take even if present values are often decided and enforced over obscure beliefs. Would you want it for the future too? Countries ossified by words of religious texts, enforced with lashings and beheadings? This was a struggle already waged and won by Western civilisation over centuries to break out of the dark ages. Liberal democracy and the incredible bounties of modern science are all offshoots of this victory of reason. But unless relentlessly reinforced, it is easy to turn back the clock. Just look at the freedoms that men and women enjoyed in Iran or Afghanistan until some decades back and compare it to the present. In Saudi Arabia, women have just been allowed to drive cars and that is considered a giant leap. The sacred is beyond question or comment but it is also unchanging, and held in place not just by reverence but also by fear. Republishing the cartoons is a revolt against that fear.