In Indian cinema, atheists become believers by the end of the film 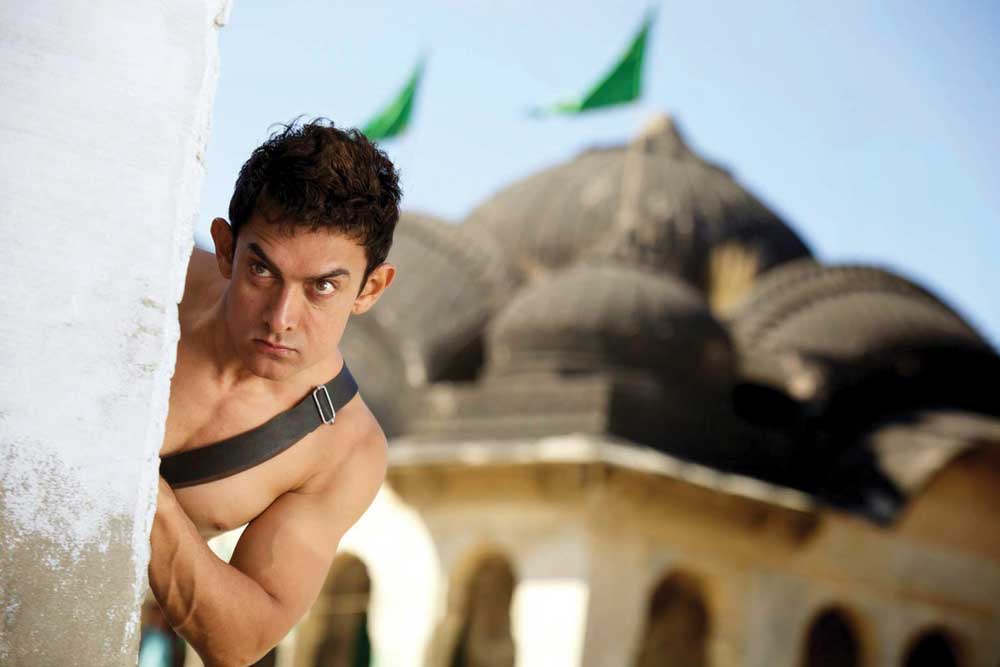 PK, THE ALIEN who lands on earth in the eponymous film, tries to find God in his search for his stolen transmitter. He never doubts that there is a god, and in his television debate with godman Tapasvi Maharaj, he argues that people should remember to worship the God who made us, not the one we made. In the world of cinema, where aliens believe in God, can humans be atheists?

Tim Whitmarsh, in his brilliant book, Battling the Gods, examines the history of atheism in the ‘ancient world’, meaning in the Greek world. Atheism usually means the absence of belief or disbelief in a god or gods. India has its own traditions of atheism, called nastika, meaning not accepting the authority of the Vedas rather than not believing in God.

The three most famous nastika schools in India are the Lokayata or Charvaka school, Buddhism and Jainism. The six darshanas, or philosophies, are astika or orthodox; that is, they accept the authority of the Vedas, rather than being theist. They do not all place God at the centre of their thought, and God may not be a personal figure to be worshipped.

Even the Vedas themselves raise questions about the nature of God, with the famous Nasadiya sukta (also known as ‘Kah?’/’Who?’ hymn, RV X.121) asking how the universe was created, and by whom. Vedantic thought explored the nature of Brahmaan in the magnificent Upanishads.

Bhakti and other devotional traditions which evolved during the last millennium and continue to underline much of contemporary Hindu belief and practice, are focused on an intense devotional relationship with a god, whether sagun bhakti, one with ‘qualities’, usually a god in human form, or nirgun bhakti, where God is formless. The latter is not atheistic, but does not focus on an anthropomorphic image of God. In Indian popular visual culture, an embodied form of the divine, usually partly human but sometimes animal, has been the most popular. Mythological and devotional films were very popular in the early days of cinema, allowing myths and legends to be retold in forms that were well suited to cinema. These films often had strongly nationalist messages; hence DG Phalke’s swadeshi cinema included Raja Harischandra (1913), which depicted a righteous king restored to his kingdom, while Ram Rajya (1942) showed the glorious rule of Rama.

After Independence, many mainstream filmmakers barely mention religion, although Hindu culture is manifest in many aspects of Indian cinema from names to festivals to language. An interesting exception is a film which tries to deny the existence of God, namely Nastik (1954, director IS Johar).

PK looked at religious practices, rather than atheism, arguing that there is indeed one God but that people are ‘calling a wrong number’ as they have become obsessed with the outward manifestations of religion rather than looking for God

Nastik is the story of Anil (Ajit), a refugee travelling with others on a train, with his sister and little brother, after their parents have been killed in the Partition riots. Kavi Pradeep’s famous song Kitna Badal Gaya Insaan is picturised against a backdrop of actual footage of refugees and also stylised shots of mullahs and priests arguing. His little brother dies while the mahant (priest) refuses to visit poor people. Anil is sent to gaol on false witness for attempting to kill the priest and becomes an atheist. His sister becomes a prostitute and kills herself. The priest realises Anil wants to kill him, so goes on a pilgrimage with his daughter to Dwarka, Rameshwaram, Banaras, Haridwar and Puri, where Anil is shown looking at the deities but not worshipping, except in that this constitutes a form of darshan. Anil decides to take revenge through seducing the priest’s daughter (Nalini Jaywant) by flirting with her, luring her out in a boat in a storm, when the spirit of the river, who appears as a figure with a halo, saves her. They marry in secret, escape by boat on the river Ganga pursued by her father, but fall in the water. Anil thinks she is dead, but her father saves her and she gives birth to a son. When the child becomes sick, she goes to a popular baba (preacher) for healing, who turns out to be Anil, who is just a fake. However, the child’s illness and cure makes him find God once again.

Although the film was banned, it went on to enjoy a Golden Jubilee (a cinema hall run of 50 weeks), probably because of its success in dealing with the issue of Partition, and the subsequent loss of faith and search for meaning in the world. Although Anil becomes an atheist, his re-finding of faith through love, repentance and his interaction with the deities, even though he has no belief in them, fits into the wider worldview of the Hindi film.

One of the most famous films to grapple with atheism in recent years is OMG: Oh My God! (2012), where the atheist Kanji Lalji Mehta tries to fight God in court after his insurer refuses to pay for damages caused ‘by an act of God’. His courtroom battles with corrupt godmen get him into trouble as along the way he is deemed to have hurt popular religious sentiment. When he is chased by a bloodthirsty mob, he is rescued by Krishna Vasudev Yadav. Kanji fails to recognise this person as Krishna himself, ignoring all the signs that the audience would seize upon, such as his guest eating all the butter, or playing the flute. It is only when he is in need of a miracle and Krishna presents himself in his traditional iconographic form that Kanji recognises and worships him.

More recently, PK looked at religious practices, rather than atheism, arguing that there is indeed one God but that people are ‘calling a wrong number’ as they have become obsessed with the outward manifestations of religion rather than looking for God.

While one of India’s most famous atheists was Veer Savarkar, one of the founding fathers of Hindutva ideology, the extent and nature of atheism in contemporary India remains something of a mystery. Are many among those who call themselves secularists also atheists? Is there an indigenous tradition of Indian agnosticism?

In Indian cinema, atheists become believers by the end of the film. But perhaps the question is phrased wrongly. What question? Hinduism includes no declaration of faith and gives more attention to orthopraxy, correct actions, rather than to orthodoxy or correct belief. While rituals are central and there is confusion over what is religious and what is cultural in Hinduism, there seems little exploration of atheistic traditions today except via Marxist or other Western intellectual and political traditions. I do not know of other religions which encompass atheism or whether in India today holding atheistic beliefs makes a person think that he or she is not a Hindu.