The Misery of a King

How Alarka learnt the difference between attachment and duty 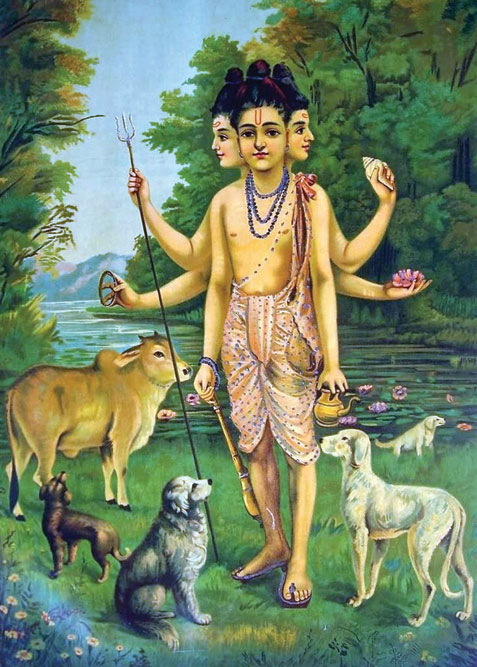 IN THE LAST piece, I mentioned an incident from the Markandeya Purana, where Madalasa instructed her son, Alarka, about raja dharma, the duty of kings. Large sections of the Markandeya Purana are about what Madalasa taught Alarka and about what the sage Dattatreya taught Alarka. Madalasa didn’t teach Alarka only about raja dharma. There is quite a bit about the duty of the four ashramas (stages of life) and specifically about the duties of a householder. But I will skip that for the moment.

When King Ritadhvaja (Alarka’s father) became old, he left for the forest, along with his wife, Madalasa. Alarka, who had married by then, became the king. To ensure that her son did not get attached to desire and enjoyment, Madalasa spoke her final words to her son: ‘When you are ruling the kingdom, you may suffer from intolerable grief because of separation from one you love or separation from a relative. Since a householder suffers from notions of ‘I’ and ‘mine’, such misery may occur. I am giving you this ring. At that time, take it out and read what is written on it in fine letters.’ Having said this, she gave him a golden ring.

Alarka ruled over his subjects properly, as if they were his sons. He punished the wicked and protected the virtuous. He ruled the earth for many years, without becoming attached to dharma, artha or kama. But he was still attached to enjoyment. He had not yet conquered his senses. He was still distracted. Alarka had a brother named Subahu who had left for the forest and Subahu thought for a long time about how he would generate understanding in Alarka. He thought that if he were to seek refuge with the king’s enemies, that would be best. The king of Kashi was such an enemy. That king raised an army against Alarka and sent a messenger with the message, ‘Hand over the kingdom to Subahu.’ But Alarka was a Kshatriya. How could he hand over the kingdom? The king of Kashi laid siege to Alarka’s capital and won over his allies. Alarka suffered a lot.

When he was extremely depressed, he remembered the ring. He bathed and purified himself, making the best of Brahmanas pronounce benedictions. He took out the instructions and saw that they were written in clear letters. The king saw the words that his mother had written down. As they became clear, he was delighted and his eyes dilated in joy. ‘Attachment of every sort must be given up. If you are incapable of doing this, associate with the virtuous. Association with the virtuous is medication. Desire of every sort must be given up. If one is incapable of doing this, one should engage in acts that lead to liberation. That is the medication.’ Having read the words several times, he made up his mind that this was the best. He made up his mind to strive for liberation and non-attachment. But how should one go about it? The king pondered about association with the virtuous. Suffering from great misery, he decided to go to the sage Dattatreya. He said, ‘O sage! I have sought refuge with you. I am suffering greatly from being excessively attached to desire. Please dispel my misery.’

Dattatreya replied, ‘O king! I will dispel your misery today. But tell me truthfully. What has caused this grief? Who do you belong to? Whose misery is this? One should reflect on the truth about this. Body, another body, without a body, all bodies—one should reflect on this.’ Alarka thought about this, the atman, its habitation and the various kinds of grief. For a long time, the king reflected on this. Eventually, he smiled and said, ‘I am not earth. I am not water. I am not fire. I am not wind. I am not space.

Thus, if there is happiness or unhappiness experienced by the body, what does that have to do with me? The one who desires this kingdom is my father’s son, born from an accumulation of the five elements. Since I am not the body, but am something else, the qualities of the body have nothing to do with me. I do not possess hands and other limbs. I do not possess flesh. I do not possess bones and the divisions into nerves and arteries. Who do these elephants, horses, chariots and other things belong to? A man has nothing to do with things in this world. Therefore, I have no enemies. I have no pleasure. I have no pain. I have no city. I have no treasury. I have no horses. I have no elephants. I have no soldiers. I do not possess these. Who has them? Just as they do not belong to me, they do not belong to anyone else. Inside a jug, a pitcher or a water pot, space can be seen in many different forms. Like that, because of differences in bodies, Subahu and the king of Kashi appear in different forms.’

Alarka bowed down before Dattatreya and addressed him in these humble words: ‘Having perceived correctly, I no longer suffer from any misery. Those who do not perceive correctly are always immersed in an ocean of grief. When a man’s intelligence has a sense of ownership in something, it is that very thing that brings him misery. When a cat eats a domesticated cow, there is sorrow because of ownership. But there is none when it eats a sparrow or a rat. Since I am beyond Prakriti, I am neither happy, nor unhappy. Anything created is subject to the principles of creation and therefore feels joy or misery.’ Dattatreya replied, ‘It is exactly as you have described. The sense of ‘mine’ is the root cause of misery. When there is no sense of ‘mine’, there is withdrawal from misery. Because of my question, this excellent knowledge has been generated in you. Like wisps of cotton from the shalmali tree, it has blown away your sense of ‘mine’. ‘I’ and ‘mine’ are the seeds from which has germinated this tree of ignorance with the giant trunk. The house and land are its branches, the wife and son are its twigs. Wealth and grain are its large leaves. The tree grows over time. Its main flowers are good and bad deeds, happiness and unhappiness are the main fruits. Relationships are the outcome of confusion and sprinkle it, acting as impediments along the path of liberation. The desire to act is like bees that surround this gigantic tree of ignorance. Exhausted by samsara, people seek refuge under the shade of this tree, and thus subject themselves to the misery of confusion and ignorance. How can they find happiness? People who sever this tree of ‘I’ and ‘mine’ with the axe of learning and the sharp flint of association with the virtuous are those who proceed along the right path. They reach the cool grove of the brahman, bereft of dust and thorns. They attain the supreme wisdom of nivritti and refrain from action. O king! The aggregation of the elements and the senses is gross. I am not that and nor are you. Neither of us is the mind. The atman that is in the body is beyond this combination of the gunas. The gnat is distinct from the udumbura [fig] tree it sits on. A blade of grass is distinct from a clump of munja grass. A fish is distinct from the water it inhabits. O king! Despite appearing as one, the atman is distinct from the body it occupies.’

Alarka understood. But there was still much more to be learnt. He asked, ‘However, since I am still attracted to material objects, there is no stability in my mind. How does one avoid being born repeatedly? How does one proceed so that one can attain union with the eternal?’ The Markandeya Purana then details what the sage Dattatreya taught Alarka about yoga.