×
Columns | History of the Present

The Message from Seemanchal

Congress’ last Muslim bastion in the north has collapsed 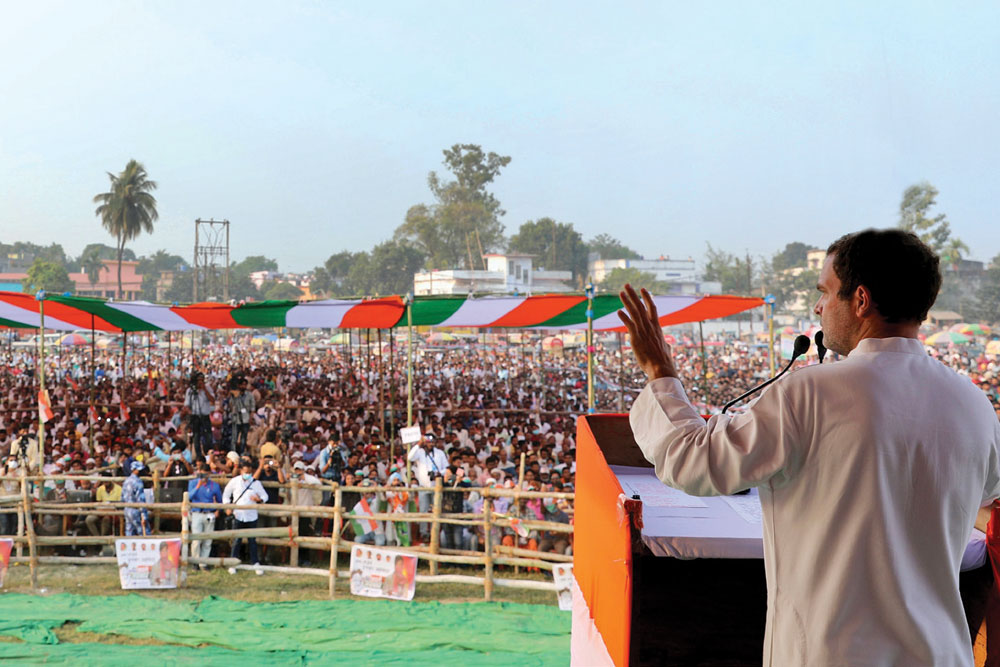 
So much lightning, so little light. There is more to the many outcomes of the recent Bihar Assembly elections than meets the media eye.

In this Age of the Mighty Algorithm it is certain that someone will eventually do the precise mathematics, but it seems very likely that almost as much has been written about the five victories of the All India Majlis-e-Ittehad-ul-Muslimeen (AIMIM, or All-India Council for the Unity of Muslims) in the northeast of Bihar as about the rest of the state. This is perfectly understandable, for this was the one result that left traditional votebank politicians aghast and professional pundits startled.

Compared with this, the defeat of the Mahagathbandhan of Rashtriya Janata Dal (RJD), Left and Congress was merely partisan bewilderment encouraged by that self-lubricating lobby of opinion-thrusters mistakenly called opinion pollsters. But most analysts, from either the political class or the media, missed the crucial message from Seemanchal: the last Muslim bastion of the Congress in the north has collapsed.

The demography of what is known as Koshi-Seemanchal, the districts of Araria, Kishanganj, Katihar, Purnea, Madhepura, Saharsa and Supaul in the riverine tracts south of Nepal and west of Bengal and Bangladesh, is unique. Muslims constitute 36.4 per cent of the region’s population. The Economically Backward Classes (EBCs) form the next largest bloc with 21.7 per cent. The Mahadalits and Scheduled Tribes (STs) are 11.4 per cent; Yadavs 11.1 per cent; Other Backward Classes (OBCs) 8.3 per cent; and the Sawarn (or ‘forward’ castes) just 5.3 per cent.

This does not mean that these blocs are always united, come election time. Muslims can easily split along dialect and ethnicity. They may agree on whom they will vote against, but not necessarily on whom they will vote for. The EBC, OBC and Sawarn are by definition conglomerates, as are Mahadalits and STs. The Yadavs may be the only voting group which displays substantial (but never unanimous) identity solidarity, which translates, as in the rest of the state, to a base vote for RJD. However, this can sometimes work to its disadvantage as when a Yadav candidate from a different party becomes a more powerful magnet on the basis of caste identity.

What the existence of blocs means is that, given the right circumstances and political impetus, they can become electorally homogenous. The blend happened in the Kishanganj belt.

No statistic represents an even spread; it is merely a classified average rather than the more nuanced ground reality. Seemanchal might have an overall Muslim proportion of 36 per cent, but the Kishanganj area has a Muslim population of around 65 per cent, giving it far greater political and electoral weight. AIMIM won five Assembly seats in constituencies contiguous to Kishanganj. There was nothing accidental or incidental about these victories. It got 51.2 per cent of the votes in Amour, 49.8 per cent in Bahadurganj, 49.4 per cent in Kochadhaman, 38.3 per cent in Baisi and 34.2 per cent in Araria. It defeated Nitish Kumar’s Janata Dal-United, or JD(U), in Amour and Kochadhaman, RJD in Jokihat, Vikassheel Insaan Party (a constituent of the National Democratic Alliance) in Bahadurganj and BJP in Baisi.


This seems to be the final phase of a slow-motion evolution over the last three decades: wherever Muslims see a credible alternative to Congress, they abandon the party they have propped up electorally since 1952. The departure of the Muslim vote from Congress began in 1967, and has continued, phase-wise, with variations. The decisive shift in Kishanganj, Bihar is towards AIMIM

Congress got 29,818 votes against AIMIM’s 85,472 in Bahadurganj; and 31,475 in Amour against AIMIM’s 94,108. Compare this with five years before. In 2015, Congress got 53,533 votes in Bahadurganj and 1,00,135 votes in Amour. In both Assembly battles Congress fought in alliance with a regional party; long gone is the era when Congress could compete on its own. But as is now inarguable, it is the Congress core vote that collapsed in this election, as its performance elsewhere confirms. Congress won only 19 of the 70 seats it contested, or a strike rate of less than 14 per cent. Just a year before, this was the only Lok Sabha constituency which Congress won, which must make the future seem even bleaker for its diminishing votaries.

In fact, Kishanganj is the only Lok Sabha seat in Bihar and Uttar Pradesh which Congress won during the consecutive wipe-out debacles of 2014 and 2019, since Rahul Gandhi lost Amethi in 2019. Congress has held Kishanganj since 2009. This seems to be the final phase of a slow-motion evolution over the last three decades: wherever Muslims see a credible alternative to Congress, they abandon the party they have propped up electorally since 1952.

The departure of the Muslim vote from Congress began in 1967, and has continued, phase-wise, with variations. The CPM-led Left Front in Bengal was the first alliance which separated the Muslim vote from Congress and then held it in its grasp for more than three decades, until Mamata Banerjee manoeuvred it into her fold. Mulayam Singh Yadav in Uttar Pradesh was the second political force to do so; his party can still count on Muslim support. In Assam it went to a regional leader, Badruddin Ajmal, an alumnus of Deoband who is the state president of the Jamiat-e-Ulema-i-Hind and now heads the All India United Democratic Front. In the 2019 General Election, Ajmal transferred his votes to Congress, but discovered there was no payback. Either Congress had no votes which they could deliver, or did not want to.

The decisive shift in Kishanganj, propelled by the enthusiasm of young Muslims, is towards AIMIM. Muslim youth have responded to a party that is as unapologetic about its Muslim identity as RJD is about its Yadav credentials. AIMIM is what it says on the label, an Islamic party for Muslims.

Its roots lie in the pre-Partition princely state of Hyderabad, where it was founded in 1927 after a silent nod from the last Nizam, Mir Osman Ali Khan. In 1944, a lawyer called Qasim Rizvi took over its leadership and launched an activist, and soon violent, movement against the integration of Hyderabad into India, using the Razakars as its strike force. Rizvi was imprisoned after 1948, and then left for Pakistan. Rizvi’s successor was Abdul Owaisi. The Owaisis have followed an Indian political tradition by converting the party into a family fiefdom. Abdul Owaisi’s grandson Asaduddin, wearing the full conservative regalia of beard, sherwani and skullcap, is the undisputed leader now. He has expanded AIMIM’s footprint from Telangana, where it is a recognised state party, to Aurangabad and Mumbai in Maharashtra, and Seemanchal in Bihar. He is planning to contest in next year’s Bengal Assembly elections, either alone or in alliance with those who will accept him as a partner. His allies are more wary of him than his opponents, since they know that giving him political legitimacy means that the Muslim vote may go over to him for a lifetime.

In Maharashtra the Muslim mood is fluid, which may be good news for Owaisi. He is also likely to test the waters in certain urban constituencies in Madhya Pradesh and Rajasthan, such as Bhopal and Jaipur. In Telangana, Owaisi has a deal with K Chandrashekar Rao’s Telangana Rashtra Samiti. Kerala is not an issue, since the Muslims there are represented by the like-minded Muslim League.

The common factor is that Congress is being displaced where it is still in some place, even if the space is increasingly marginal. Congress might still be comparatively alive in Kerala, but when Rahul Gandhi goes to Kerala to secure a place for himself in Lok Sabha, he does so at the mercy of the Muslim League. In Uttar Pradesh, Akhilesh Yadav has already clarified that he is not interested in sharing seats with Congress in the next Assembly elections, which is logical. Congress brings nothing but the memory of a withered legacy to the Uttar Pradesh table. In Bihar, there is now a good argument to be made for the proposition that RJD might have got much closer to victory if it had fought on the 70 seats it surrendered to Congress. At the moment of writing, only the Dravida Munnetra Kazhagam in Tamil Nadu is still ready to play tag with Congress.

There are many reasons for the unease and even anger of senior Congress leaders who feel that their party is being misled rather than being led. The Congress debacles in Bihar, Madhya Pradesh and Uttar Pradesh have confirmed their apprehensions about its prospects. If your only course is to sleepwalk through nowhere land, crumble will turn into collapse.

MJ Akbar
MJ Akbar is an MP and the author of, most recently, Gandhi’s Hinduism: The Struggle Against Jinnah’s Islam

The Rediscovery of Nehru