Why meat bans find support in a non-vegetarian country 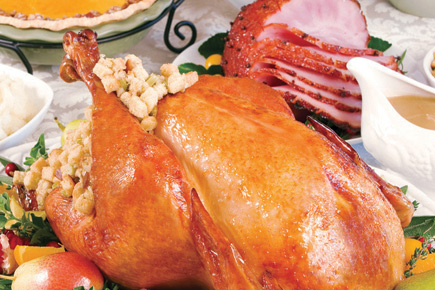 MATHURA HAS JUST been freed of the scourge of meat and if, in the process, there is Muslim anger, which then produces a response from Hindus, which then starts the counter rolling for votes in next year’s Uttar Pradesh elections, then who except a conspiracy theorist will think that such an elaborate plan could ever be conceived. Let us, therefore, leave politics and take another question: why is Hinduism associated with vegetarianism? That is not how it began. In Vedic times, the chanting of hymns was usually accompanied with animal sacrifice. Since none of the deities would come to eat it, they all had a feast later.

Swami Vivekananda encouraged vegetarianism but had no problem with meat eating, and even said it was essential for people who physically worked hard. He himself partook of it when offered as alms. BR Ambedkar has written dazzling theories on the Brahmin caste trying to outdo Buddhism, which had found enormous popular support preaching non-violence against all beings, and to occupy its space by equating meat eating, especially beef, into a religious sin. His works have numerous references of Hindu scriptures advocating the eating of meat and beef. For instance, in The Untouchables—Who Were They And Why They Became Untouchables? he talks of a ceremonial dish called Madhuparka offered to guests in ancient India. It included the flesh of a cow that eventually led to a strange fallout. He writes: “The killing of cow for the guest had grown to such an extent that the guest came to be called ‘Go-ghna’ which means the killer of the cow. To avoid this slaughter of the cows, the Asvalayana Grihya Sutra (1.24.25) suggests that the cow should be let loose when the guest comes so as to escape the rule of etiquette.” He quotes other sutras which talks of animals—goat, ram, deer—that could be served in the absence of the cow.

Even today, India is overwhelmingly non-vegetarian. One survey’s results suggested that over 70 per cent were meat eaters. Why then is our image that of a vegetarian nation? Why does a meat ban still serve political dividends? Possibly because of, as Ambedkar suggests, the enduring imprint of Brahminism. Dalits and Tribals are almost all non-vegetarian. The higher the caste, the more vegetarian, but even among them one study published in the Economic & Political Weekly suggested that it was only one-third.

But the highest caste, which is overwhelmingly vegetarian, has had almost exclusive control of literacy for millennia. So, it wouldn’t be a surprise they had outsized say on cultural values. They couldn’t stop people from eating what they want, but they could decide what is considered better on the scale of virtuosity. It is the insidiousness of caste that you can enthusiastically be made to go against your own self-interest. That is why the meat ban in Mathura is a diktat but even if it were put to vote, Hindus who are non-vegetarian would also probably be for it.