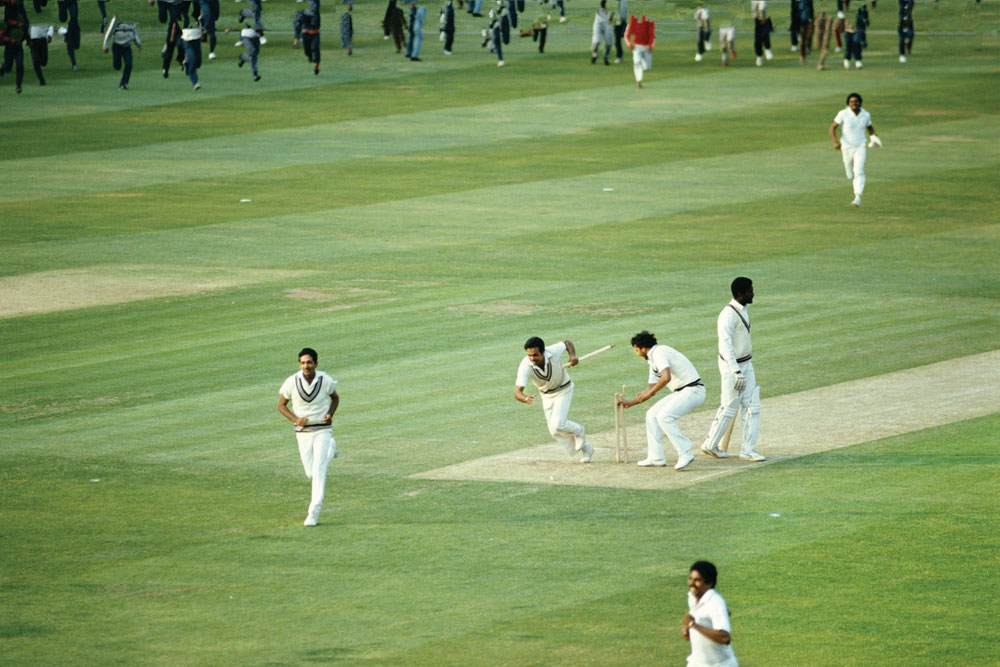 Yashpal Sharma and Roger Binny grab souvenir stumps while Mohinder Amarnath runs off the field as fans invade the Lord’s pitch on June 25, 1983


AS I WRITE this column, we are on the eve of the 39th anniversary of India’s 1983 World Cup win and the beginning of the 40th year of the triumph. The team is gathering in Mumbai for a special celebration to relive the victory and we will also see published a coffee-table book on the achievement. What does 1983 mean for us? How significant was the victory and what did it do to Indian cricket? Is it still relevant 40 years later?

I was seven years old when India won the Prudential Cup at Lord’s on June 25, 1983. I must confess I did not see Mohinder Amarnath picking the final West Indian wicket and running the fastest he ever had in his life to escape the invasion of Indian fans who made Lord’s their own that day. Yes, I have watched it a million times since—on television and elsewhere—and each time I’ve enjoyed it more than ever. Not watching the final moments of a World Cup win is something I have in common with Sachin Tendulkar. He did not watch MS Dhoni hit the final six at the Wankhede in 2011 and, as his biographer, how could I have watched the final moments of the 1983 thriller at Lord’s! Jokes aside, I was crestfallen when the Indians were bowled out for 183 and literally wept to sleep. For a seven-year-old me, the match was over with the West Indians having the likes of Gordon Greenidge, Desmond Haynes, Vivian Richards and Clive Lloyd in their ranks. It was one of the best batting line-ups ever and the West Indies were chasing a record third World Cup title. My dejection, I would still argue, was legitimate. My mother, she reminds me as I write this, did try her best to wake me up when the West Indies were eight down. All of India was watching Kapil Dev and his team turn a new leaf. I finally woke up to a new dawn in Indian cricket and was told we were “world champions”. We had beaten the mighty West Indies by 43 runs and Indian cricket had changed overnight. There were millions like me all over the country who shared this joy, and it was the highest point in the history of the game in India. Interestingly enough, it was achieved on the same day that India had debuted at Lord’s a little over half-a-century earlier in 1932.


My second encounter with the 1983 World Cup took place 25 years later in June 2008. I was at the Lord’s library for research when the trophy was all of a sudden brought out to be cleaned. It was kept a foot away from where I was sitting when the staff started working on it to get it back to full glory for the 1983 Indian team’s visit to mark the 25th anniversary of their World Cup win. I had known Adam Chadwick, then curator of the Lord’s collections, for years, and could not resist the temptation to go and ask if he would allow me to hold the trophy once. Chadwick found the request amusing and, with a smile on his face, permitted me to do so. My imagination knew no bounds and I wanted to do what most in India would give an arm and a leg for: take the trophy to the Lord’s balcony and hold it aloft a la Kapil Dev in 1983. It was my fanboy moment and, in many ways, a connect to the past, to the tournament that shaped my understanding of the game and ignited a passion which still drives me to watch every game India plays the world over.

Seeing a 32-year-old academic behave like a kid, Chadwick had little option but to agree to my request. The only caveat was one of his staff would accompany me to the balcony to ensure I did not do anything stupid! As I repeated what Kapil had done 25 years ago, something that was re-enacted by him and his team later that afternoon, the enormity of the achievement dawned on me yet again. For a team that had lost the inaugural match of the 1975 World Cup by a margin of 202 runs, scoring 136/3 in 60 overs, in response to England’s 334/4, and had lost all their matches in the 1979 edition of the tournament, to win the competition in 1983 was more than a miracle. Limited-overs cricket had not yet established itself in India and the performances in the preceding editions were a fair reflection of this ground reality. India had never won a limited-overs tournament hitherto. Hence, the prospect of defeating teams like the West Indies, England and Australia, in English conditions, was considered impossible.

1983 will always remain special. It helps us understand the true meaning of sport in Indian life. It helps us use the prism of sport to know India better and in doing so gives a new lease of life to our cricket. Sport isn’t just a news bulletin of 30 minutes. It is a defining marker of Indian identity and that’s what
the 1983 victory has at its core

Yet, they conquered the unconquerable, and in real style. Beating the world’s best limited-overs team in a dramatic final at cricket’s Mecca, Kapil and his men had transformed the game for all time to come.

It is pertinent to say that it wasn’t me alone who behaved like a kid seeing the Prudential Cup 25 years later. Men who had accomplished the feat a quarter of a century earlier did the same in 2008 and evidently enjoyed doing so. While reminiscing every little detail of what had happened on that incredible 1983 afternoon, and signing autographs and posing for photographs with the very few present, every member of the team had transported themselves to a few years back in time.

All of this came back to me as I watched 83, the film. Kabir Khan, the director, said it right: “The 1983 World Cup triumph is not a simple tournament win. It is the story of India and how we changed as a country. As a filmmaker my challenge was that I was making a film on an event that has changed your land. You have a responsibility to live up to the significance of this event. Ensure that everyone who watches the film lives that particular event with you. Billions of cricket fans do so with you. I have to say if you love the sport, you will love 83. That’s my big takeaway as a filmmaker.”

May I say 1983 will always remain special? Not simply because it is one of my favourite moments in Indian cricket but also because it helps us understand the true meaning of sport in Indian life. It helps us use the prism of sport to know India better and in doing so gives a new lease of life to Indian cricket. Sport isn’t just a news bulletin of 30 minutes. It is not a silo to be submerged by national politics. It is a defining marker of Indian identity and that’s what the 1983 victory has at its core. As we celebrate the anniversary, may I say that the victory helps us take pride in Indianness and that’s no mean achievement?