Mortals can serve the gods by pursuing kama and artha 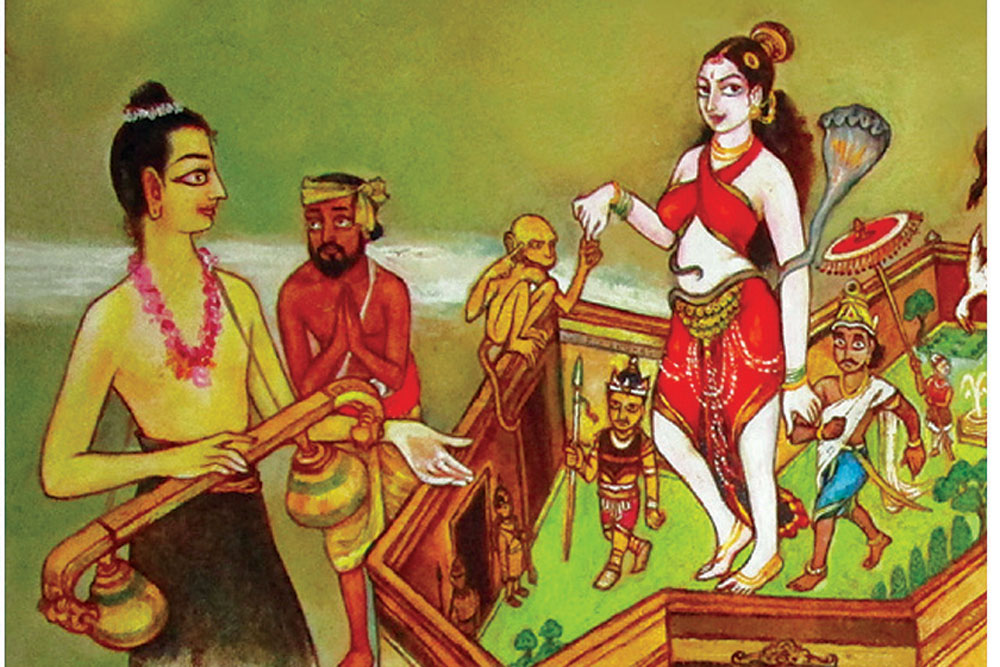 THE BHAGAVATA PURANA has a beautiful allegorical story about a king named Puranjana. The story is told by Narada. The allegory needs to be explained, even though, in a way, it spoils the story. But if I don’t explain it, and leave it for later, some meanings may be lost. I have therefore inserted brackets to explain the meanings. Other than what is within brackets, I will give you an exact translation.

There was a king named Puranjana and his fame was extensive. He had a friend named Avijnata, since his activities could not be detected. (Puranjana means someone who lives inside a city, the body being compared to a city. Avijnata is the atman.) Searching for a refuge, the king wandered over the entire earth. He could not find anything that appealed to him and he became distressed. He wished to satisfy his desires and did not think that any of the cities on earth were good enough to satisfy what he was after. On one occasion, on the southern slopes of the Himalayas, he saw a city with nine gates and it possessed all the auspicious marks. (The nine gates of the body are two eyes, two ears, two nostrils, the mouth, the anus and the genital organs.) There were ramparts, gardens, mansions, moats, windows and arches. There were many houses everywhere and the tops of the houses were made out of gold, silver and iron. There were assembly halls, quadrangles, highways, gambling houses, markets, dwelling houses, decorations of flags and festoons, parks and platforms. Outside the city, there was a grove filled with celestial trees and creepers. There was a lake filled with the calling of birds and the humming of bees. The banks of the lake were beautiful because of trees. Their branches fluttered because the cool breeze brought with it spray from waterfalls and the fragrance of flowers. The forest was filled with many animals. Travellers thought they were being invited by the calling of cuckoos. He saw a beautiful woman there, wandering around as she pleased. There were 10 servants with her and each was the husband of one hundred wives. (Continuing with the allegory, the woman is intelligence or buddhi and the 10 servants are the 10 senses. Each sense has several inclinations, that is, the wives.) In every direction, she was guarded by a serpent with five hoods. (The five hoods are prana, apana, vyana, samana and udana, the five flows of the breath of life.) She could assume any form at will. She was young and searching for a husband. Her nose was excellent. Her teeth were excellent. She was young, with an excellent forehead. Her face was beautiful. Her ears were symmetric, ornamented with shining ear rings. Around her beautiful hips, the maiden wore a yellow garment, with a golden girdle atop it. When she walked, like a resident of heaven, the anklets on her feet tinkled. Her breasts were rounded, with the signs of youth and with no space between them. As she walked like a female elephant, out of shame, she covered them with the end of her garment. Her smile was bashful and charming.

Her sidelong glances were like arrows shot from the bow of her eyebrows. The brave one was smitten by love and addressed her in gentle words: ‘O one with eyes like the petals of lotuses! Who are you? Who do you belong to? Where have you come from? O timid one! What do you wish to do in this city? Tell me. Who are the 10 great warriors who follow you? Who is the 11th? O one with the excellent eyebrows! Who are these women? Who is the serpent preceding you? Are you Hri, Bhavani or the goddess of speech? [Modesty personified, Parvati and Sarasvati respectively.] Wandering like a sage in this forest, are you searching for a husband? Has he satisfied all his wishes at your lotus feet, which are desirable? Are you the one who resides on a lotus [Lakshmi] and has the lotus been dislodged from your hand? O one with the beautiful thighs! Since your feet touch the ground, you cannot be any of these. With me, supreme among brave ones and glorious in his deeds, you should decorate this city, just as Shri ornaments the supreme world, along with the lord of sacrifices. Your bashful and sidelong glances have excited my senses. Your smiles and eyebrows have bewildered me. Touched by you, the illustrious god of love has agitated me. O beautiful one! Show me your favours. Your face is charming, with the excellent eyebrows. Your eyes have excellent pupils. Your face is encircled by locks of bluish-black hair. O one with the beautiful smiles! Because of your shyness, you are not looking at me.’ Like an impatient person, Puranjana beseeched the woman. She was also bewitched by the brave one. She smiled and greeted him. ‘O lord! We do not accurately know who our creator is. Nor do we know ourselves, or others, our gotras, our names or who has created us. We know that we exist here now and we do not know anything beyond that. O brave one! We do not know who constructed this city, where we seek a refuge for ourselves. O one who grants honours! These men and women are my male and female friends. When I sleep, they remain awake. This serpent guards the city. O fortunate one! It is good fortune that you have come here. O destroyer of enemies! With my friends, I will provide you with whatever ordinary sensual pleasures you wish to satisfy. O lord! Please reside in this city with nine gates. For 100 years, I will bring you all the objects of desire. Accept them. How can I enjoy those with a person who does not know about sexual pleasures, a person who is ignorant about the next world and does not look forward to the future? Such a person is like an animal. One obtains dharma, artha, kama, joy from offspring, immortality and fame in this world, without any sorrow and without any disease. Those who know about kaivalya are ignorant of that. It is said that in this world, the welfare of ancestors, gods, rishis, living beings and one’s own self is ensured by a mortal person through the state of a householder. O brave one! You are famous and handsome. Why will a person like me not accept a beloved husband like you? O mighty-armed one! O one whose arms are like the coils of a serpent! Which woman on earth will not be attracted to the idea of being embraced by your arms? Through your favours, you are adequate to remove the hardships of those who are without a protector. You roam around, with your smiling glances.’ Thus, the couple entered into an agreement.


It is said that in this world, the welfare of ancestors, gods, riches, living beings and one’s own self is ensured by a mortal person through the state of a householder