The West knows it must humour India, but not too much 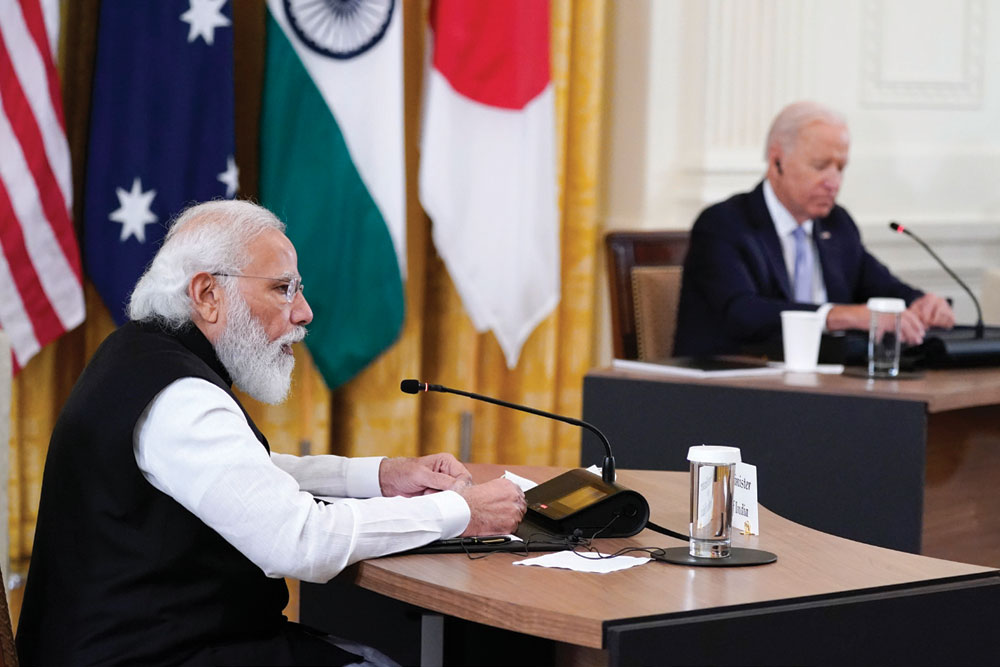 
FOR NEARLY A thousand years, India was invaded, plundered and ravaged, its temples demolished, its self-confidence broken, and its people converted to alien faiths by sword or lucre.

Through all this, India remained a refuge for all faiths. The first Christians, led by Thomas the Apostle, came to India in 52 CE. The first Muslims arrived in the 7th century during the lifetime of Prophet Muhammad. Parsis followed in the 8th century, fleeing Islamic persecution in Persia.

In India, no one was persecuted. Christians built churches, Muslims mosques, Jews synagogues, Parsis fire temples. All lived in relative peace in India among an overwhelming majority of Hindus, practising their Sanatana Dharma.

By the 12th century, it all changed. The armies of Islam had raced up to the gates of Western Europe. Most of Spain and Portugal had been conquered. The two centuries-long Crusades between Muslim and Christian armies ended in 1291 with the fall of Jerusalem to the Muslims.

Islam had long eyed India. It now seemed ripe for the picking. India would not be the same again. Nearly a thousand years later, the tables have—again—turned. A slumbering civilisation is poised to take its rightful place in the 21st century.

The modern Christian West is not pleased. The oil-rich Muslim world is not pleased either. The West, however, needs a former European colony like India as a buffer against the other awoken Asian giant, China. Washington and London had got used to a subservient India, the PL-480 food programme and general Third World-ness.

Now, they have to deal with India—the world’s fifth-largest economy, second-largest consumer market and third-largest startup hub—on broadly equal terms. That is galling. But the West, pragmatic as ever, keeping an eagle eye on China, knows it must humour India.

But not too much. India must know its place. It is the West’s partner, but a junior partner. So, when India did not back the US-led sanctions against Russia following its invasion of Ukraine, the West bristled. This is not how subalterns are supposed to behave. But Washington, London and Brussels held their fire.

China and Russia were the real threats to three centuries of Western hegemony. India could be pacified with predator drones and a future Biden presidential visit. Western institutions, meanwhile, keep up psychological pressure on India with periodic reports on the lack of religious and media freedom.

India’s reputation as a global punching bag for a thousand years precedes it. Even Muslim countries, many havens for terrorist groups, know they can intimidate India: they have millions of Indian workers as leverage, as well as oil and gas.

Shyam Saran, India’s foreign secretary during UPAI, wrote darkly in The Indian Express on June 5, 2022: “The dominant attitude of China towards India is one of condescension, bordering on contempt. As China under Xi Jinping aspires to a [sic] centrality in Asia and the world, India’s own ambitions are dismissed as those of an upstart country, daring to claim a status that history and current resurgence has [sic] bequeathed solely on China.”

Rahul Sagar, Global Network Associate Professor of Political Science at NYU Abu Dhabi, has written a book titled To Raise a Fallen People: How Nineteenth-Century Indians Saw Their World and Shaped Ours. It offers a refreshingly different perspective.

He writes: “Educated Indians saw clearly the chasm between Britain’s wholesome words and unwholesome deeds. The British praised equality but condoned racism in South Africa; they declared themselves enlightened but forced opium on China; they advocated free trade but imposed unfair tariffs on India; they spoke of justice but gunned down Zulus. Consider what Bhaskar Pandurang Tarkhadkar, one of the first Indians to receive a modern English education, had to say in the Bombay Gazette in 1841, when news of the First Opium War reached India: ‘Where is your integrity and good sense which you so much boast of—ugh! Self-interest is all in all to you, and to secure it you would do anything.’ The British response was to send the editor of the Bombay Gazette packing, bringing Tarkhadkar’s stinging editorials to an end.”

The last thousand years haven’t been kind to India.

But as Shakespeare wrote in Julius Caeser, “There is a tide in the affairs of men. Which, taken at the flood, leads on to fortune…”