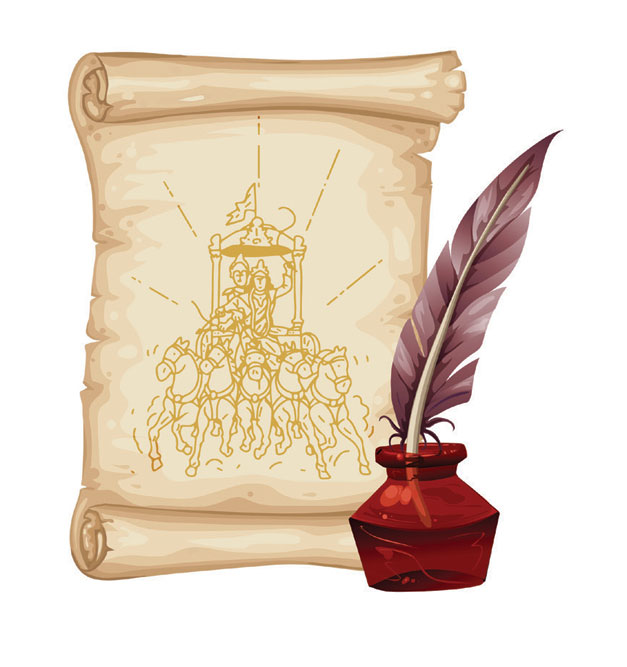 
IN ENGLISH, THERE have been three unabridged translations of the Mahabharata from Sanskrit. (The
P Lal one wasn’t quite a translation.) Most people know that two of these translations were done in the 19th century, by Kisari Mohan Ganguli and Manmatha Nath Dutt. Most people have an unfavourable view of Manmatha Nath Dutt as a translator, compared with Kisari Mohan Ganguli. More often than not, they form their opinion on the basis of what P Lal and Alf Hiltebeitel have written, not necessarily because they have compared the two translations. For example, Hiltebeitel wrote, ‘The first, which I will focus on shortly, is the 1884-1896 translation by Kisari Mohan Ganguli, who labored anonymously, leaving the credit for the work to its patron, fund-raiser, publisher, and spokesman Pratap Chandra Roy. The second, by Manmatha Nath Dutt (1895-1905), did little more than shamelessly crib from the Ganguli-Roy translation. It changed nothing substantial, and, quite gratuitously, did no more than try to improve the English. Ganguli, Roy, and Dutt were all Bengalis, and we may place their work in the setting of the so-called Bengal Renaissance, which occurred while the capital of the British empire was still in Calcutta, that is, in Bengal.’ P Lal wrote, ‘This is the second complete translation, in three volumes, of the Mahabharata, by the Rector of Keshub Academy. It is the only one that gives a verse-by-verse rendering. Dutt follows the Kisari Mohan Ganguli version closely in many places, but is more prudish: Ganguli Latinises, Dutt omits. In Book I (Adi Parva), LXIII, ‘slokas 50 to 52 not translated for obvious reasons,’ he explains; in the same book, CIV, slokas 14 to 20 are also ‘not translated for obvious reasons.’’ In case one has missed the point, the Ganguli translation did not give specific verse (shloka) numbers. The Dutt translation had these verse numbers.

Manmatha Nath Dutt didn’t quite plagiarise. But he did paraphrase and borrow. When I wrote his biography (Manmatha Nath Dutt: Translator Extraordinaire, Rupa) with several gaps in the information available, I pointed out that Dutt was much more than a translator and even as a translator, he did much more than the Mahabharata. Unfortunately, he got tarred with the Mahabharata brush. Let me quote at length about what P Lal wrote about Ganguli and Pratap Chandra Roy.


KM Ganguli, who ‘like a literary atlas bore the heavy burden of the translation’, gets mentioned only in the last volume of the English translation. Though he had no hand at all in the translation, publisher PC Roy put his own name on the title page of the first nine volumes

‘This complete and faithful translation—the first of the two complete renderings into English of the epic and the only edition now available—is the monumental accomplishment strangely referred to, by scholars and bibliographers alike, as ‘the PC Roy translation.” Pratap Chandra Roy was born in the village of Shanko in the Burdwan district of Bengal on March 15th, 1842. When he grew up, he became a bookseller in Calcutta. By 1869 he had put by enough money to buy a small printing press and start a publishing concern. By the end of 1876 he had brought out a complete Bengali translation of the Mahabharata. Then a new idea fired him: the complete Mahabharata in English. His purpose was to unfold the richness of the Indian heritage to the British rulers and to foreigners in general; as his widow innocently explained in her epilogue, attached to the last book in 1896, ‘If a knowledge of the mind of the people is of value to the administration of the country, who will deny the utility of an English translation of the Mahabharata to the British Government of India?’ He knew his own English was not good enough; and press work kept him too busy anyway. Luck brought him Babu Kisari Mohan Ganguli, a man with a brilliant academic record in English; Ganguli was entrusted with the work of translating the epic while Roy went around collecting funds from ‘peasants and princes, Anglo-Indian officials and English and American sympathisers to warrant him in going forward’—for his ambition (in which he succeeded) was to distribute the translated volumes free. His first wife died; he married again in 1886; in 1889 he was made by Queen Victoria, a Companion of the Order of the British Empire (the equivalent of today’s Padma awards); he died of an undiagnosed illness on January 10th, 1895. His will directed that his property be sold and the money employed for three purposes—the completion of the English Mahabharata, the erection of a temple to Siva in his village and the excavation of a tank there for the use of villagers. Babu Kisari Mohan Ganguli, who ‘like a literary Atlas bore the heavy burden of the translation’, gets mentioned only in the last volume of the English translation. Though he had no hand at all in the translation, Roy put his own name on the title page of the first nine volumes. The ambiguity that transformed a publisher into a translator and left KM Ganguli’s glory unsung has, to my knowledge, been spotted only by Ronald Inden and Maureen Patterson, compilers of the University of Chicago’s Bibliography to South Asian Studies; by KM Knott in the Janus Press edition of the first two books of the Mahabharata; and by AC Macdonnell in his A History of Sanskrit Literature, where the translation has been listed in the bibliography as having published at ‘the expense of P.C. Roy’ (it was surely at KM Ganguly’s expense!). The ‘utility’ was quickly noticed. Lord Dufferin sanctioned a grant of Rs 11,000 (whose purchasing power today would be around $20,000), and Lord Ripon gave ‘a handsome contribution’. Sir Rivers Thompson ‘was pleased to santion a grant of Rs. 5,000; Sir Auckland Colvin gave Rs. 2,000 when he was appointed as Lieutenant-General of North West Provinces; Sir Alfred Croft granted Rs. 5,000’. The official list is augmented with American scholars and benefactors such as Professor Lanman, and Professor Maurice Bloomfield of Hopkins University. KM Ganguli’s was entirely a labour of love. ‘My husband scarcely exaggerated the truth,’ wrote PC Roy’s widow, ‘when he used to say that… he was only the hand that did the work while Babu Kisari Mohan was the head that directed it. While lying on his death bed, he earnestly appealed to Babu Kisari Mohan to complete the undertaking. With tears in his eyes, Babu Kisari Mohan readily gave the assurance that was solicited, saying that he would not, on any account, give up the work.’ In his ‘Translator’s Postscript’, at the end of volume XI (1896), Ganguli explains that ‘Roy was against anonymity. I was for it.’ He was afraid no one person could finish ‘the whole of the gigantic work’. ‘It was, accordingly, resolved to withhold the name of the translator.’ But hardly a fourth of the work had been accomplished when ‘an influential Indian journal came down upon poor Pratap Chandra Roy and accused him openly of being a party to a great literary imposture’—that of posing as ‘the translator of Vyasa’s work, when, in fact, he was only the publisher’. Ganguli continues: ‘Now that the translation has been completed, there can be no longer any reason for withholding the name of the translator. The entire translation is practically the work of one hand. Charu Chandra Mookherjee helped with portions of the Adi Parva and Sabha Parvas. About four forms of the Sabha Parva were done by Professor Krishna Kamal Bhattacharya’.

Lal quoted Ganguli from Ganguli’s translator’s preface. A little bit of the sentence is missing in what Lal quoted. ‘About four forms of the Sabha Parva were done by Professor Krishna Kamal Bhattacharya, and about half a fasciculus during my illness, was done by another hand. I should however state that before passing to the printer the copy received from these gentlemen I carefully compared every sentence with the original, making such alterations as were needed for securing a uniformity of style with the rest of the work.’ In addition, ‘I should express my particular obligations to Pundit Ram Nath Tarkaratna, the author of ‘Vasudeva Vijayam’ and other poems, Pundit Shyama Charan Kaviratna, the learned editor of Kavyaprakasha with the commentary of Professor Mahesh Chandra Nyayaratna, and Babu Aghore Nath Banerjee, the manager of the Bharata Karyalaya. All these scholars were my referees on all points of difficulty. Pundit Ram Nath’s solid scholarship is known to them that have come in contact with him. I never referred to him a difficulty that he could not clear up. Unfortunately, he was not always at hand to consult. Pundit Shyama Charan Kaviratna, during my residence at Seebpore, assisted me in going over the Mokshadharma sections of the Santi Parva. Unostentatious in the extreme, Kaviratna is truly the type of a learned Brahman of ancient India. Babu Aghore Nath Banerjee also has from time to time, rendered me valuable assistance in clearing my difficulties.’ Hence, there was an outright grant from the government, going beyond the purchase of a limited number of copies. And the translation wasn’t done by Ganguli alone. There was something like a board of scholars, though the buck stopped with Ganguli.

There is almost a hagiographic tone to this, perhaps inevitable for the first translator of the Mahabharata into English. For those who really delve into these matters, this is known. But since I have discovered something, I wanted to revisit the issue. That discovery has to wait for the next column.