The Fear of Change

Rattled by Modi, we make too much noise about our lost little worlds 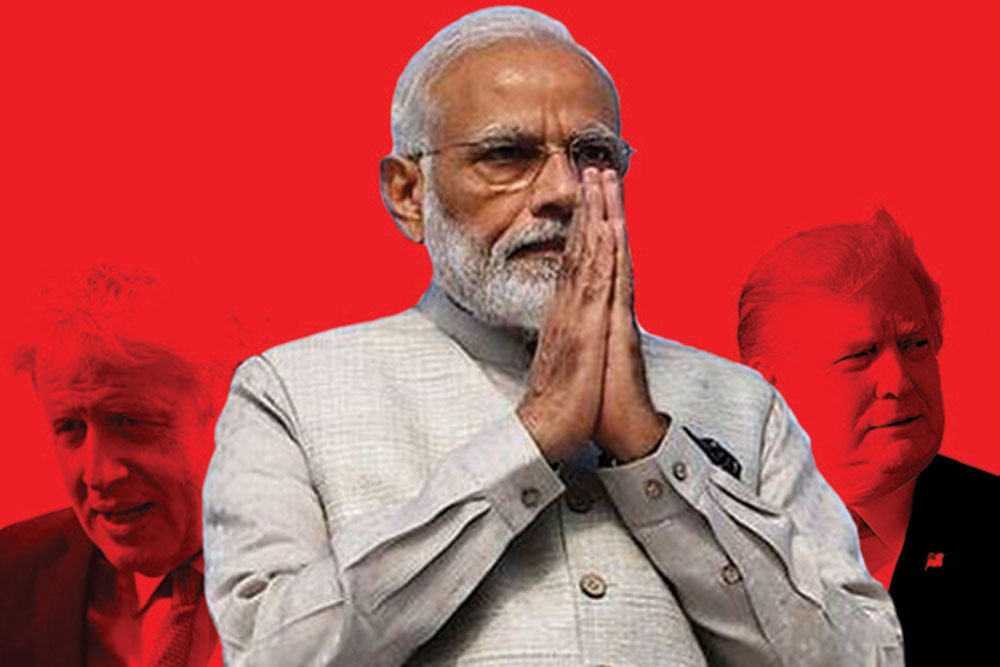 WE ALL KNOW this: the politics of the cosy present resists change, and even goes to the extent of exaggerating it in apocalyptic terms. When cracks appear on the placid terrain of the world that sheltered, and nurtured, our entitlements and our ideological superstitions, we all see that familiar devil in power—narcissistic, exhibitionist and authoritarian. His dance transfixes the liberals, establishment Brahmins, and professional alarmists in London, Washington and New Delhi. Three great democracies of the world are, if we buy the text of apocalypse junkies, trampled upon by this tradition-defying colossus made of vanity and fear.

In London the exorcism is underway. The Brexit vote three years ago was a people’s unambiguous yes for freedom from a supranational bureaucracy. It was their urge to regain the nation, its vanishing familiarities. It was their definitive way of asking the same question that first rose from the wreckage of an apparatus larger than the EU thirty years ago: Who are we? People tend to ask this question when they lose their language, their neighbourhood, their social habits, their shared cultural gestures… their street. To see the Brexit vote as a rejection of Europe or its values—no more Thomas Mann—was political idiocy. It was just about being English in the world without external supervision. It was not the natives declaring war on cosmopolitanism. They were set to pay the price. What is being played out in Britain is the theatre of the ridiculous, in which the parliament is what subverts democracy—and the popular instinct for change.

In Washington, the theatre is more Falstaffian than the English. The legitimacy of the elected president is challenged mostly because of his personal aesthetic system, which is built on half-truths, braggadocio, bluster, disregard for institutions, showmanship, and absolute anti-intellectualism. As the television critic James Poniewozik would say, Trump is the ultimate reality television in the ultimate TV Nation. Increasingly, in spite of the ungainly sight of power, Trumpism seems to have acquired a life that may last longer than Trump the Vulgarian. Trump floats in his Twitter-built make-believe; Trumpism is rooted in social realism the liberal media elite refuses to accept. It owes its solidity to instinct’s triumph over expertise, and we still don’t know how the sociology of it will transform the traditional Left and the Right. The America that elected him, and still continues to indulge him, defies the red-and-blue predictability of bipolarity. Trump is not the name of the change; he is a jarring prologue.

In Delhi, India is being reimagined by those—the same displaced legion of liberals and the last mourners of a lost establishment—who are repelled by the Narendra Modi regime as a land without mercies, a place where institutions are being vandalised and individual liberties are being curtailed by Hindu neo-nationalists. We have been warned: we are hurtling towards hell, and in the process losing our last decencies and civilities as a secular people. In this piece of political gothic, the man at the centre is the autocrat busy building his own cult, inflated by his sense of infallibility. It is a frightening piece of work, and it is being sold by artists shaken by the prospects of redundancy in an India where the old idols and pieties, and all those reassuring certainties, of a state that indulged the establishment prophets are no longer sustainable. I’m ready to admit here: the aggression of the newly empowered cultural right is unacceptable in any civilised society, and its moral system is incompatible with the world most of us inhabit. That said, India too has turned its gaze inward, and become sceptical of enforced social behavioural codes. A sense of the nation and a civilisational awareness about being a Hindu need not be a repudiation of modernity, though we don’t have a writer with the depth and lucidity of a Tom Holland who, in his new book, Dominion: The Making of the Western Mind, tells the story of how the Western intellectual identity is indebted to Christianity. To tell the story of Hinduism, on the Right we have only mythomaniacs. The rising popularity of Modi is a political expression of a cultural change that remains untapped by the cultural historian. We make too much noise about our lost little worlds.

We are frustrated by the popularity of the insurgent, who comes from the deepest recesses of resentment. We are still unaware that our arguments have been outpaced by the sighs, sorrows and ecstasies of people who lived their lives in worlds untouched by our arguments. When the Leader of Deliverance propped up by ideological straitjackets fails, countries seek their redeemers. The impulses of democracy today favour their methods, even as we recoil from their manners. Change unsettles those of us who are left with no new words to describe our remoteness.

Curse of the Template