The Boon of Goutama 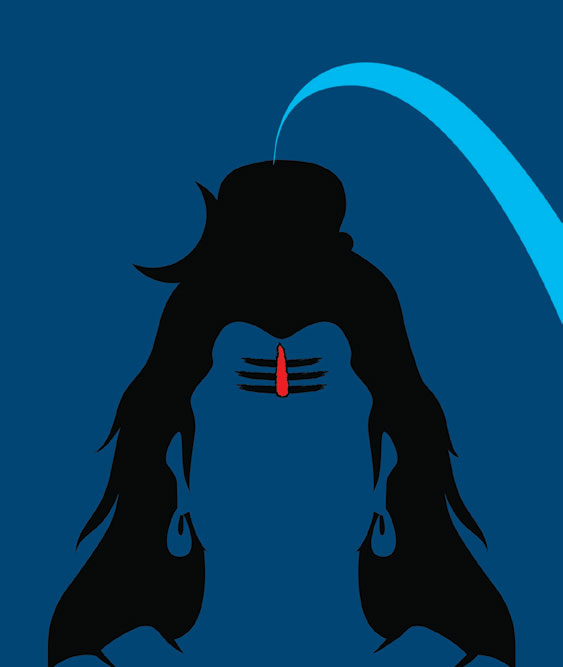 
IN THE LAST column, we left it at the point where Shiva appeared before Goutama. Maheshvara was pleased. In Suta’s words, “Casting a compassionate glance towards him, Shiva said, “O rishi! You are blessed. Since you know that I am pleased, ask for an excellent boon.” Goutama, best among sages and devoted to Shiva, joined his hands in salutation. He bowed his head down and addressed Shankara. Goutama said, “O Lord! What you have said is true. O Lord of the devas! If you are pleased with me, please give me Ganga. Please do a good turn to the world. I prostrate myself before you.” Desiring the welfare of the world, Goutama prostrated himself before the lord of the devas. Shambhu, affectionate towards his devotees, granted the sage the boon. The water of the Ganga assumed a supreme feminine form.”

“The best among rishis bent down and praised her. Goutama said, “You are blessed. You have purified the world. O Ganga! Please purify me. Otherwise, I am certain to descend into hell.” Shambhu said, “Listen. You always do what is beneficial to everyone. O Ganga! Follow my command and purify Goutama.” Hearing the words of Shambhu and Goutama, the purifying Ganga, full of devotion towards Shiva, spoke to Shiva. Ganga said, “O lord! After purifying the rishi and his family, I will return to my own abode. I am speaking the truth.” Thus addressed by Ganga, Mahesha, affectionate towards his devotees and intent on the welfare of the worlds, again addressed Ganga. Shiva said, “O Goddess! You will remain here, until the advent of kali yuga.” Hearing the words of her lord, Shankara, Ganga, the supreme river who purifies, replied again. Ganga answered, “O Lord! O Maheshvara! O destroyer of Tripura! If my greatness becomes more than anyone else, I will remain here. O Lord! In your beautiful body and along with Amba and your ganas, you must also remain here, near me.” Hearing her words, Shankara, affectionate towards his devotees and intent on the welfare of the worlds, spoke to Ganga again. Shiva said, “O Ganga! Listen. I am not separate from you. Nevertheless, I will remain here and you must also stay here.” Hearing the words of Paramesha, her lord, Ganga was pleased in her mind and worshipped him.”

“Meanwhile, the devas, ancient rishis, many tirthas and diverse kshetras arrived there. All of them lovingly worshipped Goutama, Ganga and Girisha. All the immortals, Hari, Brahma and the others, joined their hands in salutation and happily praised them. Ganga and Girisha were pleased and spoke to them. “O best among gods! We wish to bring you pleasure. Ask for a boon.” The devas said, “O Lord of the devas! O best among rivers! If you are pleased with us, as an act of compassion towards us and for the pleasure of humans, remain here.” Ganga replied, “For everyone’s pleasure, why don’t you also stay here? After cleansing Goutama, I will return to wherever I have come from. O, gods! How can I be known to be distinct from you? If you can establish that, there is no doubt that I shall remain here.” All of them responded, “Guru is the best well-wisher for everyone. When Guru is in Simha rashi, there is no doubt that all of us will come. [Guru (Brihaspati) is the planet Jupiter. That is, when Jupiter is in the constellation (rashi) Leo (Simha).] O supreme river! After purifying and cleansing the world for eleven years, we will become polluted. Therefore, we will come to you to cleanse ourselves. O best among rivers! To show us a favour and for the pleasure of the world, please remain here with Shankara. As long as Guru is in Simha, we will also remain here. We will bathe in you thrice a day and see Shankara. When we do this, there is no doubt that we will be cleansed of all our sins. Taking your permission, we will then return to our own regions.” Thus requested by them and by Maharshi Goutama, Shankara lovingly remained there and so did the best among rivers. Ganga is named Goutami [Goutami Ganga is another name for Godavari] and the lingam is known as Tryambaka. Both of them became famous under these names, and destroy great sins. Since that day, whenever Brihaspati enters Simha, all the tirthas and kshetras, all the devas, all rivers and lakes, Ganga and the other rivers and Vasudeva and other devas remain on the banks of the Goutami. As long as they remain there, they cannot yield fruits in their own regions. They regain those fruits when they return. The jyotirlingam is famous under the name of Tryambaka. It is instated along the banks of the Goutami and destroys great sins. Full of devotion, if a person sees the jyotirlingam named Tryambaka, worships it, prostrates himself, and praises it, he is freed from all sins.”

The rishis asked, “Where did Ganga originate? Please tell us. How did she obtain her special greatness? The evil-souled Brahmanas caused hardships to Goutama. What happened to them? Please tell us that.”

Suta replied, “O Brahmanas! When Ganga was requested by Goutama himself, she swiftly descended from Brahmagiri. The flow is issued from the branches of an udumbara (fig) tree. Goutama, the famous sage, bathed there and rejoiced. There were other maharshis who were Goutama’s disciples. They, too, arrived there and having bathed, were filled with delight. That place became famous under the name of Gangadvara. [Gangadvara means the door of the Ganga, or gate of the Ganga. Gangadvara is usually identified as Haridvara. But this Gangadvara is clearly different.] It is beautiful and as soon as one sees it, all sins are destroyed. The rishis who challenged Goutama arrived there to bathe. However, as soon as she saw them, she instantly vanished. Goutama quickly went there. He praised Ganga repeatedly, joining his hands in salutation and lowering his head. He spoke to her. Goutama said, “They were blind because of their insolence and prosperity. They may be virtuous, or they may not be virtuous. However, because of your sacred powers, you should show yourself to them.” Hearing the words spoken by the sage, the great-souled Goutama, Ganga’s voice again arose from the circle that is the firmament. “O rishi Goutama! You have spoken the truth and these are auspicious words. Nevertheless, for the sake of protection, they must perform prayashchitta. Following your command and under your control, they must go around the mountain one hundred and one times. It is only then that these evil-doers will have a right, especially to see me.” Hearing her words, all of them did exactly what she had said. Dejected, they begged Goutama, “You should pardon our crime.” When they did this, obeying her commands, Goutama created the place named Kushavarta, just below Gangadvara. [Kushavarta tirtha or Kushavarta kunda is adjacent to Tryambakeshvara. This is the place where the Godavari re-emerges, after disappearing into Brahmagiri.] For his pleasure, she emerged from there again. Kushavarta became famous as an excellent tirtha. If a man bathes there, he becomes worthy of emancipation. He casts aside all his sins and obtains vijnana, which is so very difficult to obtain.”

The rishis said, “O Suta! We have heard you tell us about a different account, how the angry Goutama cursed the Brahmanas. Please enlighten us about this.”

Suta replied, “O Brahmanas! That is also true. These differences occur because incidents have occurred in different kalpas. The great-souled Goutama saw that the rishis were suffering on account of famine. He performed extremely difficult austerities dedicated to Varuna. Varuna devised an inexhaustible supply of water for him. In this way, Goutama did good turns to others. Through the strength of his austerities, he arranged for food for them. On one occasion, the wicked wives felt insulted over water. They angrily addressed their husbands in words that were full of envy towards Goutama. With their minds turning away from him in this way, the Brahmanas created an artificial cow. Crooked in their minds, they made it feed on the grain. Seeing that the cow was eating up his own grain, Goutama gently struck it with a blade of grass, so as to restrain it. As soon as the cow was touched by the blade of grass, it fell down on the ground. Because of the control of karma, it died instantly. All the crooked rishis gathered together and said, “Goutama has killed a cow.” Goutama was scared since he had killed a cow. Along with the lady Ahalya and his disciples, who were devoted to Shiva, he wondered. When he got to know the truth about the cow, Goutama was filled with rage. Goutama, supreme among sages, cursed all those rishis. Goutama said, “All of you are evil-souled. I am always devoted to Shiva. Therefore, you will always turn away from the Vedas. From now on, you will no longer have any faith in the virtuous path spoken about in the Vedas, especially the path of being Shiva’s devotee, which leads to emancipation. From now, you will have faith in wicked paths. You will always be expelled from the path of emancipation and will always be outside the pale of the shruti texts.”” This is how the Tryambakeshvara jyotirlingam originated.