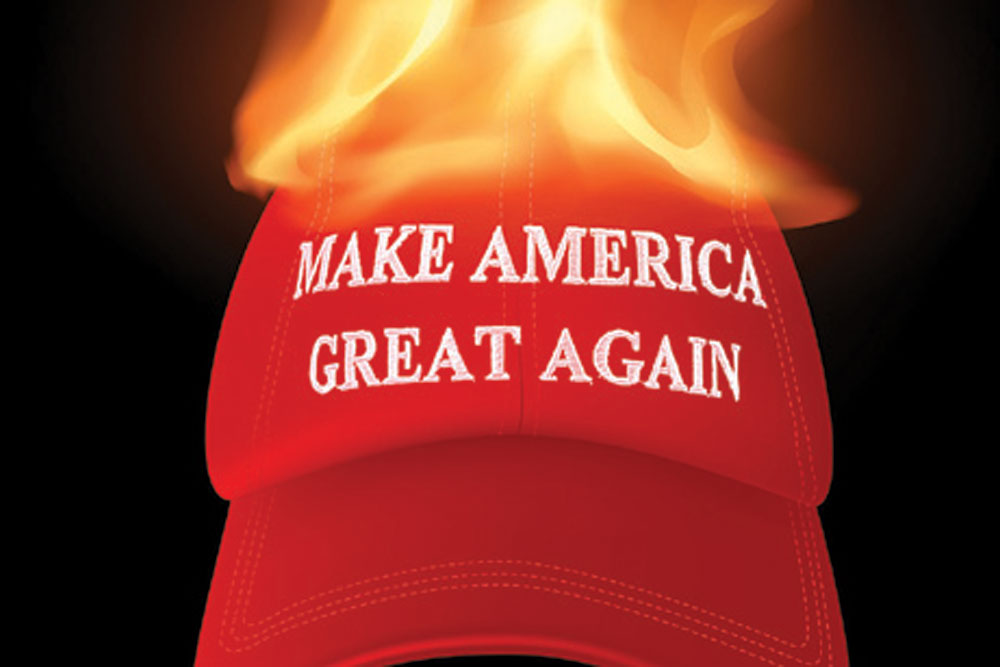 THE SECOND IMPEACHMENT of President Donald Trump is the denouement of an American drama in which the individualistic is what strikes us first: the protagonist is larger than the plot. There he is, alone and defiant, abandoned by social media and still adored by his base of the white working class, standing in front of the broken mirror of history, a man suspended between delusion and disgrace. The individualistic is what brought him down, from the glass palace of a Narcissus to the hard terrain of a ruler whose transgressive powers could not turn defeat into victory. Till the last lie, his legions stood by him, resisted facts and endorsed his uplifting fiction, read his gospels in capital letters and exclamation marks, preferred his self-portrait of a persecuted president to the mainstream media’s caricature of an unhinged autocrat. In the lonely, final hours of the reckoning, nothing matters except the last residue of a parallel reality. Donald Trump is holding on to it, maybe quietly hoping for the dignity of a tragedy in the moment of retribution.

He is not alone here. Before him, they wore medals and sat on thrones, and loomed large over their subjects as the appointees of God, the only higher sovereign. They stormed the Winter Palace; they legitimised revolutions as the only road to liberation; they established the religion of terror; they built slaughterhouses for the impure; and they saw no difference between the state and the ruler. In the words Frank Dikötter, the author of How to Be a Dictator: The Cult of Personality in the Twentieth Century, the personality cult was the most efficient strategy of the dictator: “The cult debased allies and rivals alike, forcing them to collaborate through common subordination. Most of all, by compelling them to acclaim him before the others, a dictator turned everyone into a liar. When everyone lied, no one knew who was lying, making it more difficult to find accomplices and organise a coup.”

The dictatorship of Trump also turned his followers, now a powerful and incendiary constituency in American politics, into carriers of his lies and fantasies. The cult of Trump was built by the most effective manipulator of the social and traditional media. When the liberal broadsheets and television channels declared war on the billionaire insurgent who shattered the Washington idyll, Trump wallowed in adversity and portrayed himself as America’s First Victim. Then he tweeted, like a midnight messiah for America’s shirtless, his own mythology, which would become a user’s manual for his legions. There were two Trumps, both eagerly accepted and indulged by their respective audience. The one that emerged from the liberal media was a lord of lies, a thug and a con man, a slayer of institutions and an eraser of constitutional traditions. The other Trump, written by the man himself in the style of, allow me a pun, scream of consciousness, was a victim of the elite, a leader disrespected and hunted. Each Trump delegitimised the other. Each one built his own righteous reality. They needed each other for their very survival. Both were mutually dependant exaggerations. Both are here to stay, convicted or not, as dominant, divisive ideas. Trumpism as a ghost story will be equally gripping.

Which makes the story more than individualistic. The Trump legions that stormed the Capitol, the seat of American democracy, are not going away, even if Trump does in disgrace. Trump came to power on the plank of a great betrayal: a white working class betrayed by the establishment. He played the outsider liberator, which was also the abiding image of the populist insurgent. In 2016, fuelled by his salvation theology that avoided any kind of linguistic or ideological complexity but drew heavily from plain nativism, his legions stormed Washington. That was the first insurrection. The insurgent-in-chief has not stopped ever since. He has not stopped churning the cauldron of grievance; throughout his presidency, he set himself apart from the political class, which was either useful subordinates or enemies of the kingdom. Trump promised his followers a glorious new America. They believed him. They still do. They only need a nod from him and they will storm any citadel for his reinstatement. The lie of a defeat is the only truth they want to hang on to. Four years ago Trump capitalised on a class war that was more latent than manifest. The class today is as strong as 74 million, and too visible to be ignored as a Big Lie. Politics after the pathology of Trump will be swayed by the rage of his legions.

Pessimists may ask: Is the next road to democracy’s ruins electoral? The question is relevant only if we are all idealists. Resentment is what keeps the system imperfect and necessary. Demagogues may come and go, and some exits will be as disgraceful and theatrical as Trump’s. What’s permanent is the politics of resentment, and America once again provides democracy’s freest expression, for better or worse. A challenge for the next Tocqueville.