Arshdeep Singh’s abusers on social media must be punished 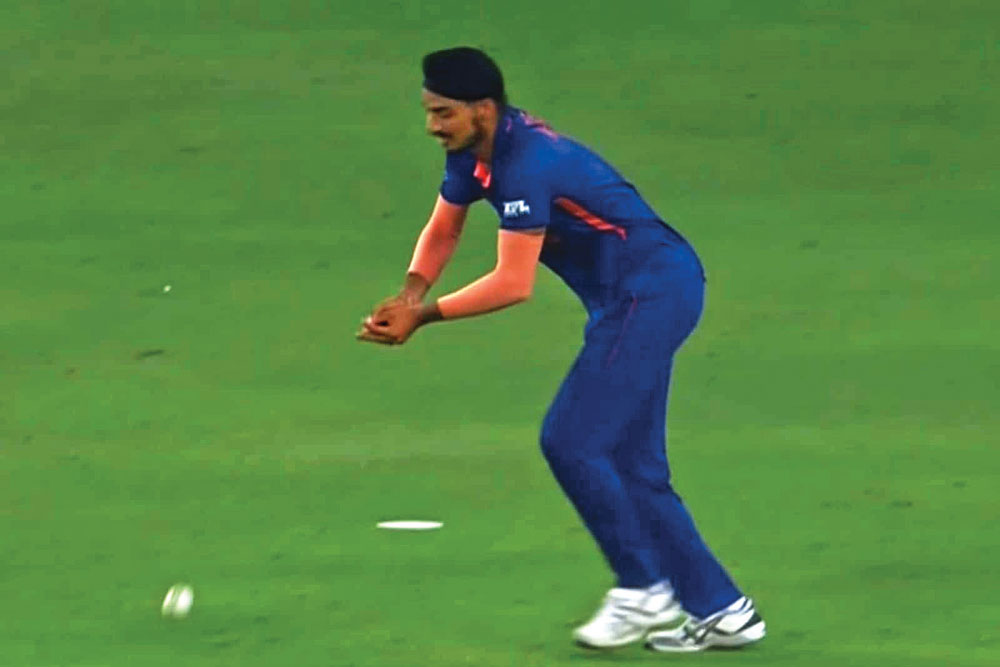 
ARSHDEEP SINGH IS a young man who has just made it into the Indian team. And yes, he did so on merit, based on performances in the Indian Premier League and in domestic crick­et. A rare talent, he can well be a future star for India. For a young man, playing Pakistan can never be easy. There is always pressure and, for Arshdeep, it was no dif­ferent. When the Asif Ali catch went up, India had con­trol of the game and that wicket could well have closed it for India. It was a sitter no doubt and Arshdeep may have approached it slightly casually. Or so it seemed at the ground. But at no point did he think he could drop it. Or intend to. India’s win or loss was dependant on it and for a young man who had just made the team, it was all the more important. For whatever reason, the catch was dropped. That’s why it’s sport. There are no retakes and no second chances. It’s cruel at times. India went on to lose the match and Arshdeep was subjected to a media trial filled with hatred and bigotry, which was still going on at the time of writing.

For a good 24 hours, he was abused and defamed. He was called names and his family was dragged into it. It is time to act against these trolls. To stop this once and for all. Peddling hate is the new India we see and that’s not the idea of India we stand for. It is not what we believe in and we will not tolerate this as a society. It is a cricket match that’s in question and there will always be a winner and a loser. It has nothing to do with one’s family and anyone who violates this norm deserves the highest punishment. Such people are either delusional or not fit for civilised society.

To elaborate further, Arshdeep, 23, was trolled because he wasn’t able to win the game for India against Pakistan. All I want to ask the men trolling Arshdeep is what they were doing when they were his age. Did they win India a high-pressure cricket match and have they achieved anything close to what Singh has? Did they even think about what the young man was going through before trolling him?

Second, and this is a dangerous trend, people have started to feel they are entitled to say anything. And get away doing so. After all, it is social media, which is faceless. With time, social media has become a domain of unmediated abuse and that’s the worst it could get to. For example, Sachin Tendulkar was trolled for donating `2 lakh less than Suresh Raina at the start of the Covid-19 pandemic and Ajinkya Rahane was trolled for donating `10 lakh only. While this is outrageous and vulgar at one level, it is alarming at another. It shows the deep anxiety and anger people feel towards the successful and it is as if they need to always do things expected of them. If they don’t, then they deserve to be abused and punished. The campaign against Arshdeep is another example and it is of paramount importance that this is nipped in the bud. We have already let this persist for way too long and the discourse is a reflection of what we have got ourselves into.


Some people have said the Arshdeep case is an aberration and we should let it pass. Fans were upset at losing to Pakistan. The truth is, it is not an aberration. It is not something we should let pass. In a population of 1.3 billion, even 1 per cent of abusers is a sizeable number and can’t be ignored

Some people have told me the Arshdeep case is an ab­erration and we should let it pass. That fans were upset at losing to Pakistan. And to vent their frustration, they said what they did. The truth is, it is not an aberration. It is not something we will let pass. Besides, some people have also said that 99 per cent Indians stand with Arshdeep, so why give importance to a delusional 1 per cent? Frankly, in a population of 1.3 billion, even 1 per cent is a sizeable num­ber and can’t be ignored. If one among that 1 per cent tries to harm or show disrespect, it can’t be ignored. So ignor­ing what happened is not an option. We will not ignore it. We will take them head-on, book them for cyber crimes, and teach them a lesson. They deserve to be named and shamed—and they can’t be allowed to hide behind a face­less social media and get away with peddling hate.

Just a few days earlier, the cricket fraternity in India was deeply sensitive to concerns expressed by Virat Kohli in an interview wherein he outlined the importance of mental health. Within a week, a section of the very same fraternity was abusive of Arshdeep without caring at all about the young man’s mental health. What must Arshdeep be going through! What were his thoughts at the end of the game? How does one help him at this point instead of adding to his woes? Will we talk selectively about mental health and do so as and when it suits us?

Each of these acts of abusive trolling is a slur against humanity and such trolls go against the very grain of what we stand for—the idea of India. Sport is a domain of positivity and is like an oasis amidst all the toxicity in our daily lives. To pollute sport with such vulgarity is a crime. It is deplorable to say the least and what it will end up doing is make Arshdeep start to hate the media and social media alike. He will soon grow a distaste for it and he can’t be blamed if he does so. We will yet again destroy the synergy that should be there among the play­er, the fan and the media. India deserves better from its citizens and in this day and age that’s the least we could do for our countrymen. No human being can ever be sub­jected to vulgar abuse for dropping a catch in a cricket match. Anyone who violates this basic code is a disgrace and the sooner we realise this, the better.

It also underscores the question of social media sensi­tivity and standards. While it is all very good to have platforms that stand for free speech, the line between free and abusive is fast getting blurred. Why weren’t such trolls pulled down or stopped? Can there ever be moderation that ensures peddlers of hate are pulled up? Or will we continue to allow this in the name of free speech? It is indeed a very thin line and a healthy debate on it is very much the need of the hour.