The quintessential union for the betterment of all 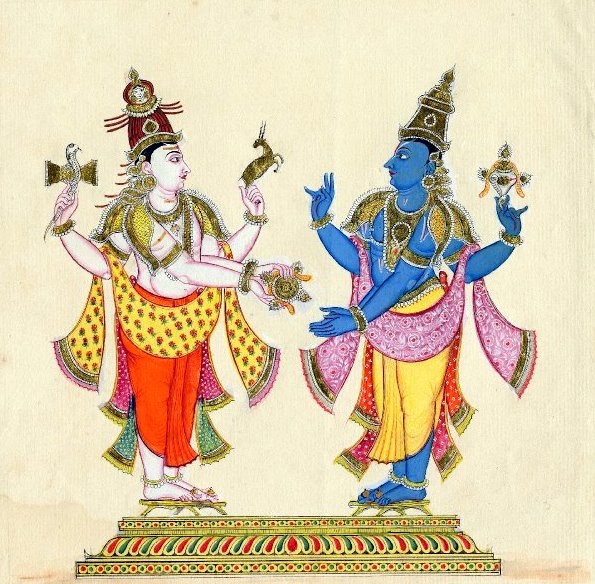 
The relationship between Vishnu and Shiva has been studied from the time of the ancients who found an explanation in the complementary manner in which the duo saw to the survival of the world. Begin with the fact that the world, Brahma’s creation, was since inception protected by Vishnu. When the time on earth of human life is over, Shiva steps in to see to it that the departed individual is carried away to another unknown realm, leaving behind just the physical body to be disposed of. And, of course, some memories.

Going by what the ancients believed in, it is significant that none of the great Thapaswi demons did penance to propitiate Vishnu. Almost all of them worshipped either Brahma or Shiva. They expected Vishnu to be stingy with boons.

Shiva, on the other hand, was lavish in his gifts. There is a vernacular saying that one has to look at how much the begging bowl can contain before giving alms. Shiva characteristically knew only how to give. Two of the cases which astounded the rest of all divine energies was what he promised his great devotee, Ravana, the demon king of Lanka who was reputed to break his daily fast only after consecrating a shivalingam daily.

Full of arrogance, once Ravana had tried to lift up Mount Kailash, where Shiva and Parvati lived. Ravana’s intention was to literally “shake up” his beloved lord. It is said that Parvati ran back into Shiva’s arms after a marital discord (which was of almost human proportions with this divine couple), when Mount Kailash started shaking. Shiva looked down to see Ravana straining to actually lift the mountain. Shiva gently pressed down with his toe, only to crush Ravana’s arms. Undeterred, Ravana worshipped Shiva with even more fervour. He started to cut off each of his ten heads and offer them as fire oblations to Shiva. When nine heads were sacrificed thus, Shiva appeared in front of Ravana. And the demon king’s advancement from that time is legendary thanks to the munificence of Shiva. The ancients pointed with awe to Ravana’s composition, the Shiva Tandava Stotram. The composition is a magnificent example of bhakti, erudition and music.

Emboldened by Shiva’s kindness to him, Ravana asked if Shiva’s shakti or his spouse may be sent to Lanka with him. The whole world was aghast. Shiva was a deity who had consumed the deadly poison, Halahala, which was thrown out by the snake Vasuki during the samudra manthan. Both the asuras and the suras cooperated to churn the ocean of milk. It was on this Sree Padmanabhaswamy reposed. When Vishnu got Lakshmi and Indra, the chief of gods, and walked away with a lot of gifts that he may not have fully deserved, Shiva did not make a fuss about his lot. As a perfect yogi, it was not easy to make Shiva agitated in any way.

It was then that Mandodari (who resembled Parvati) was created to accompany Ravana back to his kingdom. When Shiva promised an eager Ravana his own atmalingam, again the world was plunged into despair. As it was, Ravana seemed to be extremely powerful. With Shiva’s atmalingam in his possession, Ravana would be invincible. It took the sagacious Ganapati who promised to “hold” it for Ravana till the demon king’s urge to answer the call of nature was satiated. The ancients say that all the gods got together to delay Ravana to such an extent that Ganapati, disguised as a Brahmin boy, could safely put down the precious atmalingam, which refused to move an inch from where it was placed and be taken to Lanka.

When Shiva’s first wife Sati immolated herself in her father Daksha Prajapati’s sacrificial fire at his yagna, Shiva went mad with grief. He hugged Sati’s charred body and started dancing the violent tandava of destruction. Only if Sati’s corpse was taken away from Shiva would the latter cease mourning. Vishnu, with his Sudarshana Chakra, cut Sati’s body into 51 (some say 108) pieces. Each place where a piece of Sati’s body fell became a Shaktipeeth, or place of exceptional divine energy. For example, Nayana Devi is a place where her eye fell, Jwalamukhi where her tongue fell, etcetera. It was only then that Shiva returned to his ascetic life, till the advent of Parvati who was Sati reborn. It was Vishnu who facilitated this and brought about a modicum of peace to the distraught Shiva.

Whenever those forces armed with boons from Brahma or Shiva himself threatened the world, the denizens would turn to Vishnu and ask him to save them. Vishnu took on nine incarnations to save his creation. Yet, Vishnu had no ego in heading the delegations to Mount Kailash when it was not yet time for Vishnu’s avatars to be manifested, but annihilating the demons was necessary. It was said in ancient times that Ravana was such a great devotee of Shiva that the Yamadootas, or agents of Yama, the God of death, could not approach Ravana. Having been blasted off by Shiva once, Yama himself was wary of trying to capture Ravana’s soul. Vishnu himself had to don the avatar of Rama so as to kill Ravana, as only a Vishnu could absorb the force of this staunch devotee of Shiva. It may be remembered that Ravana was so obsessed with Rama that the former’s mind was unwaveringly fixed on Rama.

In his female Mohini form, Vishnu had charmed the asuras into handing over the pot of amrit or the elixir of life, to be eventually divided between the devas and danavas. Being partial to the suras, Vishnu saw to it that the vessel was emptied when the devas had partaken of it, with the exception of Rahu and Ketu, disguised as devas. Exquisite was Vishnu’s Mohini form. The root of this Sanskrit term is “moham”, to desire. Shiva was intrigued by this. He had not seen Mohini during the churning of the ocean of milk. Shiva urged Vishnu to show him his Mohini bhava. Vishnu demurred. His reasoning was that Shiva may be consumed by the desire for Mohini. Shiva was that yogi who had burned up Kama, the God of love, as he had tried to assist Parvati in wooing an ascetic Shiva.

The Shiva Purana has scenes of bemused devotees of Shiva looking at a fleeing Mohini, hotly pursued by their ascetic, snakes and bhasma (ash) adorned God. Ayyappa, the hugely popular celibate deity, was the result of this union of Shiva and Narayana. That is why he is known as Harihara Putra, or the son of Hari and Hara. Shiva meditates on Vishnu all the time. And Vishnu does is incessant puja to Shiva. But for that single instance where Shiva fights for Banasura and Vishnu for his nephew, the disapproved son-in-law Aniruddha, lover of Banasura’s daughter Usha, there has been no conflict between these divinities. There are areas in this country that have been ripped apart in the name of different deities within a single faith. To limit the limitless into denominations has long been the disservice that human beings do to the divinities they profess to worship. Shiva and Vishnu represent the quintessential union for the betterment of all, a necessity that has seldom been observed throughout human history.