The Mahabharata gives a dharmic reinterpretation of misfortune 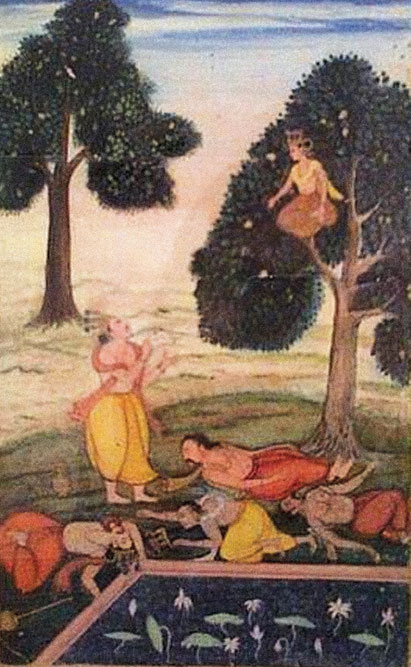 THE YAKSHA PRASHNA incident from the Mahabharata should be familiar territory. Most people have heard of it. But on the internet, I recently found a query. How many questions did the yaksha ask Yudhisthira? The answer was also given: 18. I wish it were that simple. The yaksha did not number the questions he asked Yudhishthira. Therefore, I have decided to revisit this and give you a complete version. The Mahabharata is divided into 18 sections known as parvas. One of these is known as ‘Vana Parva’ or ‘Aranyaka Parva’, where the exiled Pandavas wander around in the forest. Both ‘vana’ and ‘aranya’ mean forest. Within the ‘Vana/Aranyaka Parva’, there is a sub-section known as ‘Araneya Parva’. ‘Arani’ means wood used for kindling and this parva is named after kindling-wood. The yaksha prashna occurs in ‘Araneya Parva’.

The Pandavas left the region known as Kamyaka and went to the beautiful region known as Dvaitavana. They went towards the sage Markandeya’s enchanting hermitage, where there were succulent roots and fruit. All the Pandavas began to live there with Draupadi, controlled in their vows and living frugally on a diet of fruit.

While Yudhishthira was seated with his brothers in the forest, a Brahmana swiftly approached and sorrowfully spoke these words to him. ‘I left my kindling-wood and the churning-rod [used to light fire through friction] leaning against a tree. But they stuck to the antlers of a deer that rubbed itself against it. O king! The great deer rushed away at great speed from the hermitage, using giant leaps. Swiftly follow the footprints of that great deer. O Pandavas! Bring those back to me, so that my fire sacrifice is not spoilt.’ Hearing the words of the Brahmana, Yudhishthira felt sorry. He grasped his bow and left with his brothers. For the sake of the Brahmana, they prepared themselves and swiftly dashed after the deer. The Pandavas saw the deer at a short distance and shot barbed arrows, hollow arrows and iron arrows at it. But the maharathas could not pierce it. While they were trying in this way, the great deer disappeared. Seeing the deer disappear, those intelligent ones were exhausted and sorry. In that dense forest, they sought shelter under the cool shade of a banyan tree. Their limbs were sore with hunger and thirst and they seated themselves.

When they were seated, Nakula spoke to his eldest brother, with a heavy heart and lack of patience. ‘Dharma has never been given up in our lineage. Nor have objectives been lost through laziness. We are superior to all beings. O king! Why has this disaster befallen us again?’

Yudhishthira said, ‘There are no limits to misfortune. Nor effects or causes. Dharma distributes it, depending on merits and demerits.’

Bhima said, ‘The attendant dragged Draupadi into the assembly-hall like a servant. There is no doubt that we are confronted with this calamity because I did not kill him then.’

Arjuna said, ‘I tolerated the extremely harsh words spoken by Karna, which penetrated the bones. There is no doubt that we are confronted with this calamity because of that.’

Sahadeva said, ‘There is no doubt that we are confronted with this calamity because I did not kill Shakuni when he defeated you at the game of dice.’

After this, King Yudhishthira spoke to Nakula. ‘O Madri’s son! Climb a tree and look in the 10 directions. Look for water that is nearby, or trees that grow near water. Your brothers are exhausted and thirsty.’ Following these words, Nakula swiftly climbed a tree. After looking in all the directions, he told his eldest brother, ‘O king! I can see many trees that grow near water. I can hear the cries of cranes. There is no doubt that there is water somewhere here.’ Kunti’s son Yudhishthira, steadfast in his truth, then told him, ‘Swiftly go and fetch some water.’


‘Dharma has never been given up in our lineage. Nor have objectives been lost through laziness. We are superior to all beings. O king! Why has a disaster befallen us again?’

Then Yudhishthira spoke to Vijaya. ‘O Bibhatsu! [Both Vijaya and Bibhatsu are Arjuna’s names, as is Gudakesha.] O destroyer of enemies! Your brothers have been gone for a long time. O fortunate one! Go and bring them and the water.’ At these words, Gudakesha grasped his bow and arrows. The intelligent one grasped his unsheathed sword and proceeded towards the lake. Arjuna saw his brothers, the tigers among men who had gone to fetch water, lying down dead on the ground. On seeing them, as if asleep, Arjuna, lion among men, was extremely distressed. He raised his bow and looked around in the forest. Savyasachi [another of Arjuna’s names] could not see any beings in that great forest. He was exhausted and rushed towards the water. As he rushed towards it, the voice was heard from the sky. ‘Why are you approaching? You will not be able to drink the water by force. O Kaunteya! O descendant of the Bharata lineage! If you are able to answer my questions, you will then be able to drink the water and take it.’ Having been thus restrained, Partha said, ‘Show yourself and then restrain me. You will not be able to speak again in this fashion when my arrows pierce you.’ Saying this, Partha invoked his arrows with mantras. He displayed his skill at shooting arrows targeted at sound, enveloping the directions. He unleashed many showers of barbed arrows, hollow arrows and iron arrows towards the sky.’

The yaksha said, ‘O Partha! What purpose do these exertions serve? Answer my questions and then drink. If you do not answer the questions, you will cease to exist as soon as you drink.’

But having unleashed his invincible arrows, he was overcome by thirst. Ignoring the words, he drank and collapsed and fell down. Kunti’s son Yudhishthira then spoke to Bhimasena. ‘O descendant of the Bharata lineage! Nakula, Sahadeva and the unvanquished Bibhatsu have been gone for a long time, having gone to fetch water. O fortunate one! Go and fetch them and bring the water.’ Having been thus addressed, Bhimasena left in the same direction, where his brothers, tigers among men, had fallen down. On seeing them, Bhima was distressed and was oppressed by thirst.

The mighty-armed one thought that this must have been the work of yakshas or rakshasas. He thought, ‘I will certainly have to fight today. But let me drink the water first.’ Partha Vrikodara, bull among men, was thirsty and rushed towards the water.

The yaksha said, ‘O son! Do not be foolish enough to do this. I have obtained possession of this earlier. O Kaunteya! Answer my question. You can then drink it and take it.’

Bhima ignored the yaksha’s words. He drank, collapsed and fell down. At this, the king who was Kunti’s son began to think. Tormented in his mind, the mighty-armed one arose. He entered the great forest, bereft of the sounds of people. It was infested with ruru deer, boar and birds. There were dark, colourful and beautiful trees, abuzz with the sounds of bees and birds. The immensely fortunate one entered the forest and saw the beautiful pond, as it was covered with a net of gold. It seemed to have been created by Vishvakarma. It was covered with a bed of lotuses. He was exhausted and approaching the lake, gazed at it with wonder.

He saw his dead brothers. He saw Arjuna dead, with his bow and arrows scattered, and Bhimasena and the twins, motionless and bereft of life. He shed tears of sorrow and breathed hot and deep sighs. Using his intelligence, he began to think. ‘Who has killed these brave ones? There are no marks of weapons on them. Nor are there any signs of footprints. I think it must be a great being that has killed my brothers in this way. I must reflect on this with concentration. Perhaps I will find out after drinking the water.’

We will learn about the conclusion in the next column.