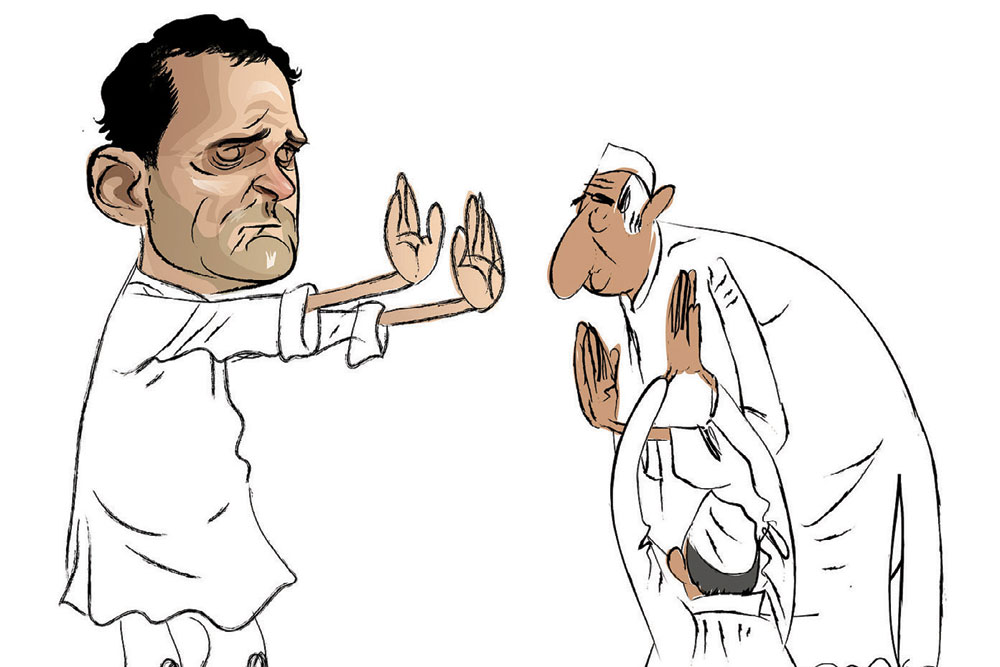 
There is speculation that Rahul Gandhi may become Congress president again as some senior Congress leaders still want to bring him back as head of the party. However, the buzz is the Gandhi scion is not keen to take over the party presidentship in the upcoming All India Congress Committee (AICC) session. According to the grapevine, Rahul has told his mother Sonia Gandhi that he is still not in a mood to take the reins. As a result, Sonia may have to continue as party chief. Also, Rahul went on an overseas jaunt in the midst of the farmers’ protest, which he may have undertaken deliberately to send a message to party members that they should choose their own leader and let him be. Clearly, the Congress leadership is in a bind, and even has no clue where the next AICC session will take place. A leadership vacuum could well have anchored Priyanka Gandhi more actively. Instead, an income-tax raid at her husband Robert Vadra’s house again has got the Congress in a huddle.

IN the upcoming West Bengal Assembly election, Swami Vivekananda has become a major issue. He is not only a symbol of Hinduism, but is associated with Bengali identity. And it is well known that Prime Minister Narendra Modi shares a special bond with the Vivekananda-founded Ramakrishna Mission. However, on the sage’s birth anniversary, January 12th, it will not be Modi but Home Minister Amit Shah who will visit the Mission headquarters at Belur Math. He is slated to visit the temple of Ramakrishna and see the room where Vivekananda used to live. Usually, this room is not open to the public but the Belur management has made an exception for Shah. He has recently visited Vivekananda’s ancestral house. On January 23rd, Modi is scheduled to visit Netaji Bhawan on Elgin Road in Kolkata. On that day, too, he will not go to Belur. Meanwhile, Shah has constituted a committee on Subhas Chandra Bose and has included the general secretary of Belur Math on that committee.

All Eyes on Nitish

All eyes are on Bihar Chief Minister Nitish Kumar. Apart from the strong rumour that he will resign very soon, there is gossip he may rejoin the Lalu Prasad grouping. There is also the tattle that the Bharatiya Janata Party (BJP) wants to get rid of its ally, the Janata Dal-United, as there is a large anti-incumbency against JD(U) in Bihar—so much so that a large section of JD(U) MLAs is poised to sign up with BJP. Earlier, Nitish had stepped down as JD(U) president after six of the seven JD(U) MLAs in Arunachal Pradesh defected to BJP. Lalu, too, is learnt to have reached out to Nitish on the issue, suggesting that he quit. But it hasn’t quite changed the chemistry that Nitish and Prime Minister Modi share. Modi has instructed the Prime Minister’s Office (PMO) to cooperate with the Nitish government.

It’s the turn of the states to have a say on the Covid vaccines. As elections approach West Bengal and Assam, the states are hankering after the first jab. Both Assam Chief Minister Sarbananda Sonowal and his colleague Himanta Biswa Sarma want the people of Assam to get the shot first. But West Bengal BJP wants Prime Minister Modi to announce free vaccination in the state. In Bihar, the BJP manifesto prior to the election had announced free vaccination. Given that the Covid vaccine rollout is only a matter of days now, state demands are posing a major challenge for the Modi Government.

In West Bengal, BJP’s main target seems to be Chief Minister Mamata Banerjee’s nephew, Abhishek Banerjee. In Bengali, nephew is called ‘bhaipo’—so from Home Minister Amit Shah to BJP leader Kailash Vijayvargiya, everyone is attacking Abhishek without naming him, but calling him bhaipo. Though they allege the nephew is corrupt and an extortionist, no evidence seems available to back their claims. Meanwhile, Trinamool Congress (TMC) strategist Prashant Kishor is exhorting Abhishek to be aggressive rather than reticent in the face of such criticism. The new approach has prodded Abhishek to embark on a north Bengal tour where he has attacked Vijayvargiya’s son.

In Bharatiya Kisan Union leader Rakesh Tikait, the farmers have found a face to their protest. And he happens to be the younger son of the late Mahendra Singh Tikait, who too held a massive farmers’ rally at the Delhi Boat Club lawns in October 1988 until the then Rajiv Gandhi Government bowed to his demands. Eventually, Gandhi’s Government got embroiled in the Bofors scandal and Finance Minister VP Singh had already stepped down in 1987. Today, Rakesh Tikait is tracing his father’s footsteps from Meerut to Delhi. However, October 1988 and January 2021 are not the same. Prime Minister Modi is a strong and popular leader and the opposition is rather weak. Interestingly, Rakesh Tikait has named his son after Charan Singh, referred to as the champion of India’s peasants.

Kerala Governor Arif Mohammad Khan is now a hot favourite of BJP and the Rashtriya Swayamsevak Sangh (RSS). A section of the RSS brass thinks he can be a good choice for the country’s next vice president. The Prime Minister, too, likes him. Khan was a strong campaigner against
Article 370. On Triple Talaq, too, he stood his ground and supported BJP. He is a scholar of Islam, but is firmly against fundamentalism. Now that elections are due in West Bengal and Assam, sources reveal that the Prime Minister wants to send out a message that he was never against Muslims.

Behind Narendra Modi’s passion for knowing his countrymen is an efficient research team which keeps him up-to-date. On several occasions, the Prime Minister gives ideas for fresh enquiries. In the Mann ki Baat programme, he uses such inputs. A case in point is Healing Himalayas founder Pradeep Sangwan, who has been campaigning since 2016 to rid the mountains of plastic waste that the tourists leave behind. Sangwan’s dogged approach made Modi praise him in his year-end Mann ki Baat and
refer to him as a young Turk. Such gems are unearthed by the PMO’s communication officers, an IFS officer who was earlier trained in the media, an IT specialist and a clutch of social media analysts who are involved in this new discovery of India.

Jharkhand Chief Minister Hemant Soren is bound for Harvard to deliver a talk. For that purpose, a senior professor is reportedly teaching him English. Soren is slated to deliver a speech on tribal life and how his government has impacted the rural tribal areas. The buzz is that it was Prime Minister Modi who inspired Soren to deliver such a speech abroad after doing proper homework.

Prime Minister Modi is learnt to be sad about the death of Karima Baloch, the human rights activist from Balochistan and a vocal critic of the Pakistan government. In exile as a Pakistani dissident, Baloch’s body was found in Toronto, Canada, on December 22nd, 2020. Modi is learnt to have instructed National Security Advisor (NSA) Ajit Doval to give him a detailed account of what happened, and the latter is actively pursuing the case.