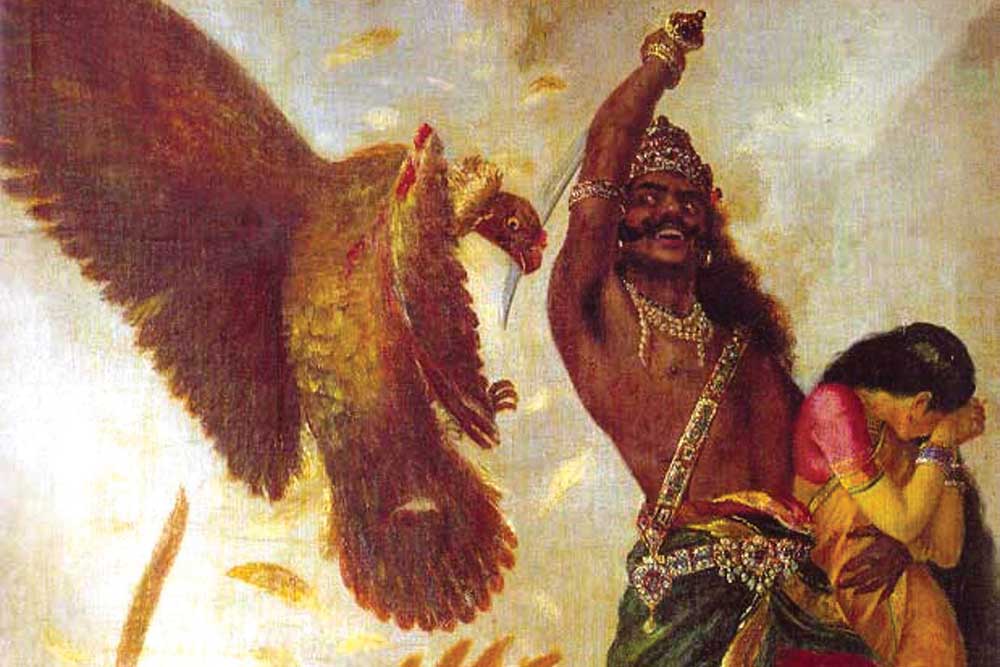 Ravana, the demon king, is best known as the demon king who spirited away Rama’s (who was an incarnation of Vishnu) wife Sita to his island kingdom Sri Lanka and was, ultimately, killed for this action. Ravana had a complex genealogy. His DNA came from his grandfather Pulasthya, who was one of the mind-born sons of Brahma. His parents were Vaisrava and the demon princess Kaikesi. His ancestor Sumali was what could be termed ‘Praja KshemaThalparan’, or a king who was satisfied when his subjects were happy.

From this complex mixture of genes arose the fascinating and complex character of Ravana, who underwent rigorous penance until a pleased Lord Shiva appeared before him. This darshan was not an easy one to achieve.

Ravana was reputed to have 10 heads as he was master of the Four Vedas and the Six Shasthras. In fact, the expressions on Ravana’s10 faces denoted the classical ‘Nava Rasas’, or the nine emotions depicted in Indian visual arts, with an extra one all of his own! Ravana was a consummate artist and it was said that no one in Creation had equalled him.

A cursory reading of his Shiva ThandavaSthuthi (or a set of shlokas depicting the dance of Shiva in his Nataraja form) will show Ravana’s mastery of language, rhythm and beauty. In many places during the Pradosha pooja, when Shiva is said to dance before all the gods, to entertain his beloved Shakthi, this sthothra is recited even to this day. Shiva’s bull Nandi plays on the percussion while Vishnu sings for Shiva during the heady dusk of Pradosham!

At first, with true rakshasa pride,Ravana tried to force Shiva to respond to him. With his immense strength, he attempted to lift up Mount Kailas, Shiva’s icy home, and shake it. With his characteristic nonchalance, Shiva pressed his right toe on the ground, which crushed Ravana’s arms. But Ravana was a quick study! He invented a musical instrument, the veena, and played on it to please Shiva,who did not respond. One by one, Ravana sacrificed each of his 10 heads to Mahadeva. When Ravana got ready to sacrifice his last head, a pleased Shiva appeared before him. Again, Lord Shiva inundated him with boons and blessings.

Adoration of Shiva was one of the constants of Ravana’s life. He, like an obsessive devotee, wanted to possess Shiva completely. Ravana knew that as an ascetic, Shiva meditated on SOMEONE, even though he was the God of gods, or Mahadeva. That Shiva was a worshipper of Maha Vishnu and vice-versa is a well-known fact (except to the ever-warring Shaivites and Vaishnavites).

“Sahasranaamathathulyam Rama naamavaraanane,” Shiva urged Shakthi. The root of the name ‘Rama’ has both the ‘Ra’ of Narayana and the ‘Ma’ of the Panchaakshari Manthra Namah Shivaayah. Ravana’s obsession with Rama started thus. Like Mahisha,being ready to sacrifice his very life to melt into the Goddess, Ravana got ready for a battle he knew he was bound to lose.

Sita had stated that if Rama was the sun, she was the sunlight and that it was impossible to bifurcate the two. Getting Sita in his custody was imperative to achieving his goal, as Ravana knew that Rama would follow Sita wherever she was. Getting Rama to come to him was the purpose behind the taking away of Sita, an action uncharacteristic of a scholar and seeker of perfection, but who was firm on securing the presence of Rama, knowing that this would fulfil his (Ravana’s) destiny,which was death at the hands of Lord Rama.

The true trait of a devotee is a devotion which extends to all that is precious to his deity. In this case, Shiva’s beloved Vishnu. That Rama sat by the feet of the fallen Ravana to gain knowledge from him, is again telling. The God of death, Yama, let alone his assistants, dared come near such a great acolyte of Mahadeva. Only after Rama left Ravana did Yama dare to claim him. It was only fitting that an incarnation of Vishnu had to come to gather Ravana into the conflict-less world of salvation. These are some of the truths that votaries of the glory of Lord Rama need to understand about the complexity of events that have become an eternal part of the history of mankind.