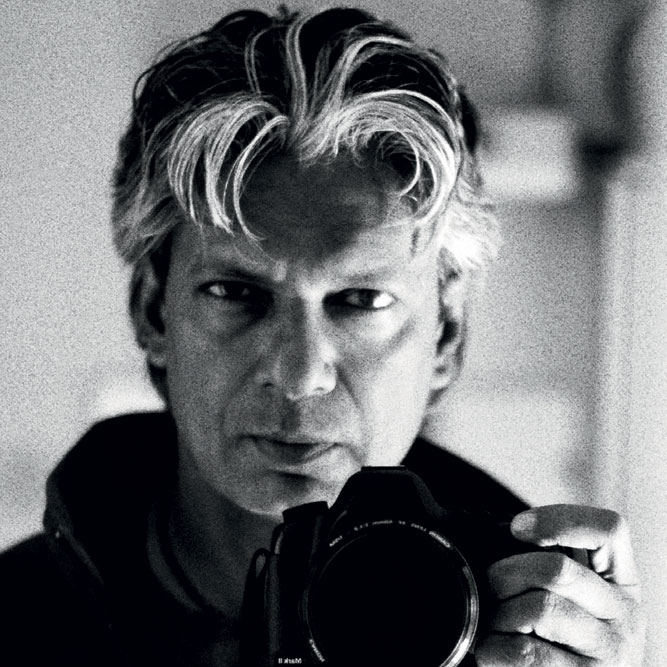 
IN 2016, I wrote in these pages about the posthumous retrospective of the work of the photographer Prabuddha Dasgupta (1956-2012), held at the National Gallery of Modern Art (NGMA) in New Delhi. Last month, another exhibition of his photographs opened at the Bengaluru chapter of the NGMA, which will be on display until January 15th. Like my last encounter with Dasgupta’s work three years ago, I felt a frisson of excitement this time too. The timelessness of a certain class of art makes you respond to it in ever evolving ways, and through such work, you come to know yourself a little deeper. This, to me, is one of Dasgupta’s enduring legacies.

As I walked through the show on a quiet Sunday afternoon, I savoured the pleasure of looking, yet again, at several of Dasgupta’s iconic photographs, which have become etched in my memory over the years: The face of a young woman lost to sleep, frowning in her dreams; a frugal kitchen table against a wall with plaster peeling off it, bearing a framed photograph of Christ looking on; a solitary Buddhist boy walking across a vast expanse of land in Ranbirpura in Ladakh. Entire stories seemed to have been compressed into these frames.

Dasgupta’s images have always struck me as intensely literary, or rather poetic, even when they were made for specific commercial purposes. The inescapable narrative energy of his compositions urges the viewer to look beyond the frame and stretches the boundaries of their imagination. It’s an exercise in arousing the viewer’s empathy and interest, while also titillating in them a spark of desire. Is it the proximity to these beautiful bodies and places that we crave? Or is it the object they are meant to highlight, in case of the advertising campaigns for example, that we want to possess? Or maybe we want to hold the photographic image in our mind’s eyes—a work of art that would open the windows of our consciousness every time we look upon it?

As the title of the show promises, Prabuddha Dasgupta: A Journey takes the viewer on a peregrination, through time and memory, into this rich archive of images that belong, recognisably, to another era. This is not to suggest that Dasgupta’s work is dated, or that it doesn’t have enough contemporary resonances, but rather to affirm its unique place in the history of Indian photography. It’s hard to think of a living photographer whose work has the range, depth, playful candour and artful ingenuity of Dasgupta’s aesthetics, along with a persistent desire to demolish boundaries and shake the viewer into new states of awareness.


Whether he shot for magazines, advertising campaigns, portraits or nudes, Dasgupta brought a distinctive sensibility to bear upon his subject. Under his piercing gaze, models in glossy magazines looked like inhabitants of a magical world; whorls and petals of flowers became erotically charged; and landscape transformed into sublime poetic abstractions. Born to artist parents, Prodosh and Kamala Dasgupta, Prabuddha spent much of his youth in the rooms of the NGMA in New Delhi, where his father held the position of the director.

In the long summer afternoons, the young boy would often find himself ensconced in the cool chambers of the gallery, among the paintings of Amrita Sher-Gil. It was perhaps his love for Sher-Gil’s striking portraits of dusky women that translated into his obsession with women’s bodies as a photographer.

Later in life, Dasgupta would publish a book of photographs celebrating the lives and bodies of women, at once sexualising them but also observing them with a clinical precision, capturing the geometric elegance of curves, muscles and sinews as well as a deep interiority.

It’s hard to think of a living photographer whose work has the range, depth, playful candor and artful ingenuity of Prabuddha Dasgupta’s aesthetics

Beyond a keen appreciation of the physical beauty of women, the many masters of Indian art, whose work surrounded him in his growing years, gave him a sense of composition, voice and narrative destiny. Dasgupta’s affinity with design and abstraction is palpable in the photographs of the landscapes he took in places such as Ladakh, in the interiors of buildings with winding stairways, as well as in the exquisite botanical details of plants and flowers that turned into something rich and strange under the spell of his camera.

For most of his career, Dasgupta was wedded to the analogue camera and black-and-white photography, using them to tremendous advantage to carve an idiom of that was distinctly his own. He teased out layers from his prints by manipulating their textures through subtle modulation of light and exposure. One of his great gifts was the ability to make visible what usually is unnoticed even when it is laid out right before our eyes. His images of flowers, for instance—often uncomfortably close shots of petals soft and shiny, as though oozing a viscous sexual energy—were reminiscent of the erotic lilies and orchids photographed by the American master, Robert Mapplethorpe.

Another example of Dasgupta’s photographs stretching the limits of the viewer’s imagination comes through in the promotional campaigns he shot, in particular the one for Ganjam jewellery. Instead of predictably stylised shots of models preening before the camera decked in headgears and necklaces, we see the various adornments placed strategically over body parts, captured in close focus. Strings of beads are wrapped around one model’s face—covering her eyes, forehead and chin—as if some sinister sea creature is strangling her with its tentacles. The idea of entrapment is amplified by the interplay of light and shade, crisscrossing across her face, as though she’s behind bars.

Even more daring are Dasgupta’s juxtapositions of the precious jewellery against unlikely backdrops. Stems of flowers and leaves become receptacles for rings, while a necklace is used as a fish hook by a fisherman as he carries his catch on a beach. In the latter, Dasgupta frames the shot focusing closely on the man’s crotch, barely covered by a piece of loincloth, the jewellery shimmering against his flawlessly smooth dark skin, and dead fish hanging off it. Looking at such images across the divide of over a decade and a half, it’s hard to imagine many companies now going this far to allow a photographer creative licence to play with an assignment. Dasgupta’s image didn’t merely intend to sell a piece of jewellery, but rather projected itself as a work of art, creating a value far beyond that of precious metals and stones.

For several years before his untimely death, Dasgupta was venturing on to newer terrains, where the human face and landscapes had begun to assume a certain primacy. While his portraits of the local Portuguese community in Goa, where Dasgupta spent the final years of his life, are haunting, it was in an ongoing series called Longing that he left a special mark of his genius. Apart from the obvious connotation of materiality and the body, longing, in Dasgupta’s lens, assumes the form of unspeakable desires. The intensity of these cravings and the need for seeking them are such that his subjects seem to be writhing in agony, or possessed by some nameless intimation of dread.

Women—with their faces almost always obscured—are sprawled, naked, their bodies contorted in the throes of ecstasy. Then there are voyeuristic gazes cast through closed windows into a mortuary-like room, where a spectral figure lies supine. And then occasionally the camera pans out of bedrooms and closed spaces into wide open vistas, pausing on a tent standing forlorn on an empty field, or on flames rising from shrubs and bushes, punctuating the blackness of the night with their glow. With none of the places identified in the captions, the images in this series hold up a mirror to a condition of humanity that is at once rooted in our material circumstances and a reflection of the universal truths of our existence.