Party and the Family

What Sonia Gandhi can learn from Megawati Sukarnoputri 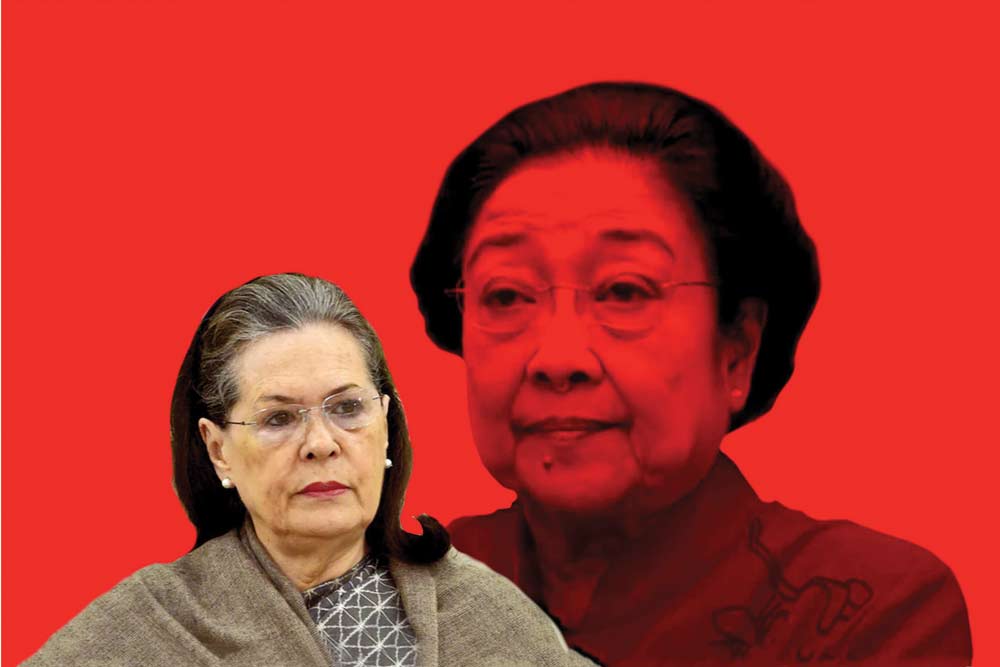 
WITH ITS LATEST, but undoubtedly not last, abysmal performance at the polls, the choice for India’s Congress has never been starker: reinvention or death. Reinvention at this point is a euphemism for de-Gandhification. And yet, with every defeat that the party chalks up, its irrational solution has been to thrust still more Gandhi on the voters. Caught between family loyalty and political suicide, Congress appears willing to shuffle off its mortal coil rather than find a non-Gandhi leader among India’s 1.3 billion-strong population.

But it is hardly the first, or only, political party to find itself strung upon this particular pair of dilemma-festooned horns. India’s maritime neighbour and nomenclatural cousin, Indonesia, is also home to a grand old, independence-era party, with an ongoing tension between dynasty and durability.

I am referring to PDI-P (Partai Demokrasi Indonesia Perjuangan), the modern-day avatar of PNI, the party that dominated Indonesia’s political landscape in the first few decades of its independence. PDI-P’s chairwoman, Megawati Sukarnoputri is, as her name indicates, the daughter of Sukarno, the archipelago’s first
post-independence president.

Sukarno and Jawaharlal Nehru were friends and brothers in non-aligned arms. And the imperious Megawati has certainly borrowed from the best Nehru-Gandhi tradition in surrounding herself with yes-men. A culture of sycophancy is as endemic to PDI-P as it is to Congress. Loyalty to the Sukarno family is the usual path to political success for party hopefuls.

And yet, despite all her power-clinging tendencies, Megawati had the sense to see that which the Gandhis appear unable to, despite the very large writing on the wall. The Sukarno scion realised that the only way for PDI-P to have continued political relevance was by elevating a family-outsider to the ranks of presidential contender.

And so, this is exactly what Megawati did, albeit grumpily, in the last two general elections. In 2014, at the very last minute, she recused herself as presidential candidate in favour of Joko “Jokowi” Widodo, a non-party loyalist. She did this for the excellent reason that he was popular and electable, while she was neither.

Back in 2014 (incidentally, the same year that Narendra Modi came to power in India), PDI-P had just spent two terms in the wilderness of the opposition. Megawati had never won an election. She had served as president from 2001 to 2004, but had been nominated, rather than elected, to that role. PDI-P had gone on to lose both the 2004 and 2009 general elections to Susilo Bambang Yudhoyono and his Democratic Party.

Opinion polls at the time showed Megawati as having about as much chance at winning the presidency as they predicted Rahul Gandhi of leading Congress to an outright victory in national elections in India that same year.

Unlike the Gandhis, however, Megawati had enough of a sense of political self-preservation to back a Sukarno-outsider in the 2014 race. Jokowi was a relative newbie in politics, loved precisely because he was not part of elite Jakarta circles and the families that dominated these.

As in India, the Indonesian electorate was clearly ready for a change. In both countries, the old guard of dynastic politicians was seen as irredeemably compromised and corrupt. Jokowi was a breath of honest-to-goodness fresh air that helped clear the staleness of the Sukarno family grip on PDI-P. A former furniture businessman, he had only entered politics in 2005 when he was elected mayor of Solo, a mid-level city.


Despite all her power-clinging tendencies, Megawati had the sense to see that which the Gandhis appear unable to. The Sukarno scion realised that the only way for PDI-P to have continued political relevance was by elevating a family-outsider to the ranks of presidential contender

Jokowi went on to win both the 2014 and 2019 elections, enabling PDI-P to lead coalition governments, more-or-less conterminously with the Bharatiya Janata Party’s (BJP) rule at the Centre in India. It was not all smooth sailing. Megawati remained loath to cede too much control to the president and attempted to exert power behind the throne throughout Jokowi’s time in office.

In this, she partially succeeded. In several instances, she forced Jokowi’s hands, particularly in making key government appointments. For example, in his early months in office, Jokowi was cornered into naming Budi Gunawan, a close confidant of Megawati, as the chief of the National Intelligence Agency, despite
his tainted and corrupt reputation. More recently in 2021, Jokowi merged several state-owned research institutions into one National Research and Innovation Agency to which he then appointed Megawati as chairperson.

But Jokowi has also proved to be an astute political operator. Soon after taking office in 2014, the president brought in PDI-P rival Golkar into the ruling coalition. This strengthened his position to manoeuvre independently of Megawati’s wishes. In 2019, he repeated this stratagem to a similar end.

Sukarno’s daughter has learned to share power to remain in power, although it remains an incomplete education. Megawati is grooming her daughter, Puan Maharani, to take over as head of PDI-P in the near future. If Puan proves unelectable—which is quite likely given her unpopularity—a second heir, Muhammad Prananda Prabowo, who is Megawati’s son from a different marriage, is also being considered by her as a potential successor.

Megawati clearly does not want the party chairmanship to pass to someone outside the Sukarno clan. And so, despite Jokowi’s electoral success, it remains highly unlikely she will pass the party baton on to him. Yet, she has shown that when push comes to shove, she realises that winning a political mandate is more important than keeping PDI-P under family control.

This is more than can be said for the Gandhis and Congress. The inability/unwillingness of Congress to outgrow the Gandhi family has repercussions that are larger than just the inexorable waning of what was once India’s primary unifying political force. It deprives the country of a viable opposition at a time when the ruling party has shown the kind of authoritarian tendencies that need tempering.

Habitual inbreeding is a historical recipe for the downfall of empires. But it is an even more egregious sin in a nation with claims to being a republic. That Congress finds it impossible to expand its gene pool in a country as diverse and demographically capacious as India, is shameful. If the party is ever to be able to stem its bleed, the Gandhis could do worse than learn from PDI-P’s evolution in Indonesia. Megawati Sukarnoputri remains an entitled dynast at heart. She is a petulant power-sharer at best. Yet, she has chosen to ensure the relevance of her political party at the cost of the potential irrelevance of her family. Gandhi Inc would do well to ‘Look East’ in this instance.