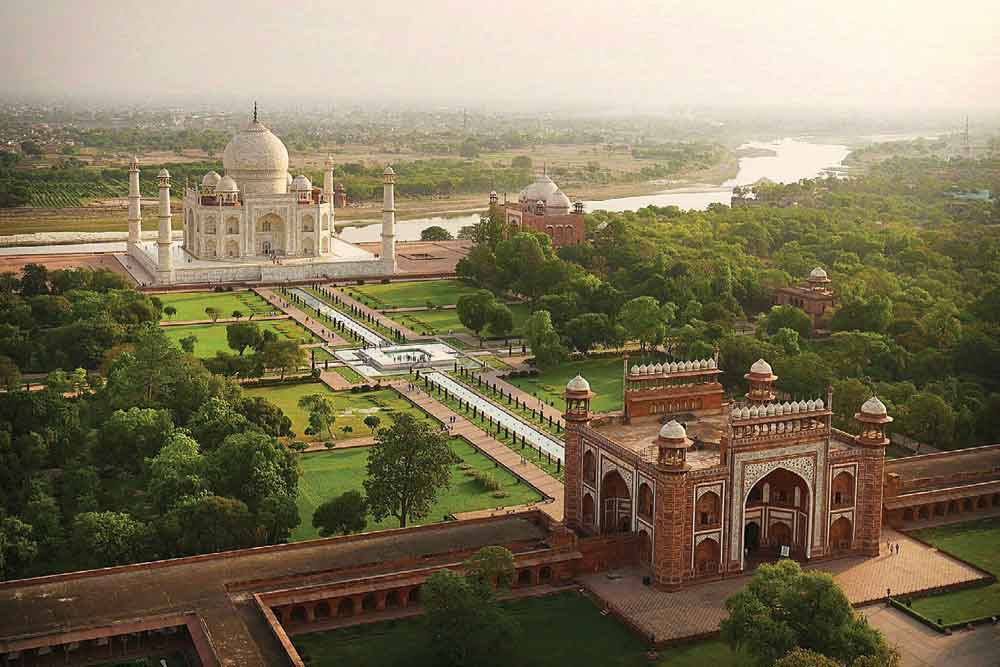 WHEN WE LOOK around at public gardens like Nehru Park and Lodhi Gardens in Delhi, they are a tumultuous mix of order and chaos—wild and mass plantings interspersed with ordered paths and geometric shaped pools and fountains. In The Geography of Bliss: One Grump’s Search for the Happiest Places in the World, Eric Weiner travelled to Iceland, India, Qatar, Bhutan, Moldova, Switzerland, the US, Thailand and the UK to find the happiest country. In his voy­age and encounters, he examined the ingredients that made for a happy country. Each country, he realised, had a different concept of happiness. India’s chapter title, ‘Happiness is a Contradiction,’ highlighted the embrace of extremes—order and chaos—defining the country’s notion of happiness.

When transposed on how we view nature in India, chaos and order are co-rulers, combining and creating a wilder notion of order, not the regimented, pruned variety of a German or a French or an imperial garden. Like the Red Queen in Alice in Wonderland was able to hold two contradictory thoughts at the same time, the quintessentially Indian way of seeing nature combines order with wildness, allowing the natural forms and shapes of plants to flourish. This shows up in our present-day gardens and parks, in how they braid the influences of our ancient, medieval, Mughal and British colonial histories.

This braiding of order and wildness is not just limited to Indians but also to those who’ve come to India as invaders and settlers. British planting styles in India used evergreens, herba­ceous borders, and mixed English annuals and local perennials. For the homesick memsahibs, stuck among strange people speaking foreign tongues in the hills and plains of India while their husbands administered the jewel in the British crown, gardening in India was an act of faith. Eugenia W Herbert writes in Flora’s Empire that the most successful British gardeners in India learned to temper their longing for English flowers with a masala of local plants. One was Fanny Parks’ garden on the banks of the Yamuna in Allahabad: full of luxuriant creepers and climbers forming a canopy over her bower, exuding delicate fragrances, and drawing hummingbirds and butterflies to the nectar. Blossoms hung from surrounding trees and nymphaea floated on the water, she says in her letters. In her descriptions, she doesn’t mention a single English flower, yet, nostalgia did steal upon her for the “lovely wild flowers of the green lanes” of England. Others like the missionary William Carey, however, in­sisted on growing plants from England in his Calcutta garden, in a weather most unsuitable for it. The most successful expatriate gardens blended English seasonals with local perennials.

Ironically, as Herbert points out, while their Indian gardens tried to capture memories of ‘back home’, when they returned home, some of their gardens sought to recreate something of India. She writes about James Forbes who brought back more than two hundred seeds from Gujarat for his garden at Stanmore Hall, in the midst of which he placed an octagonal temple filled with Hindu sculptures. In his glass conservatory he grew many flowers celebrated in Indian poems such as the Madhavi creeper, the changeable rose (Hibiscus mutabilis), the fragrant mogra, and the sacred tulsi.

While the private gardens braided different combinations of the local with the European sensibilities, the story in the gar­dens open to public gaze was different. In the gardens of the Taj Mahal, the British goal was to evoke the might, grandeur and orderliness of imperial rule. Lord Curzon, an enthusiastic gar­dener and Britain’s viceroy to India from 1899 to 1905, “imposed an imperial stamp” by felling fragrant trees, shrubs and other plants to open up views of the Taj. Herbert writes: “It removed the mystery and the romance of the monument that was once cloaked behind towering foliage, revealing its contours only as the visitor drew closer.” Curzon reconstructed Taj Ganj, the entry to the Taj Mahal, by removing the bazaars and caravan­serai outside. He couldn’t understand Shah Jahan’s vision that wanted the visitor to enter from the public space of a noisy, dusty bazaar into a private paradise of a garden tomb. Curzon’s changes, she points out, exaggerated the rigidity of Mughal geometry without the softening effects of thicker plantings.

Gardening is about a way of seeing the world. Just as the quintessential British gaze longs for wildflowers and green lanes, our gaze yearns for scented white flowers in the cool of the night, and clusters of vivid colours like the ones we see on gar­lands. And we long for a sense of mystery, a gradual revelation.

Poems and descriptions of Indian gardens evoke the delight of the viewer when the veil of a leafy bough or a climbing vine is lifted to reveal a bower filled yellow amaranth, a couch of flowers, and caskets of lotus leaves. These gardens did not spring up from the wild; they were planned ones with water, bowers and swings to create pleasure gardens. The key prin­ciples being reveal a little at a time, and allow the natural habit of the plant to flourish and bloom in its full splendour rather than subjecting it to the shears of a rigid geometric order.

A garden revealed all at once is like a story told before it is start­ed, British garden designer Dan Pearson writes in Home Ground. He points out that while evergreens are important to create the backbone of a garden, one must balance it with the other plant­ings. “The Victorians gave evergreens their bad reputation plant­ing them profusely at the expense of more ephemeral plants. The constancy and weight of acuba, yew, box, privet and holly took a heavy toll because there was no relief from the wall of green.” You need to have evergreen with deciduous to allow the seasons in.

But these days, our gardens in India cannot hark back to the pre-British era when gardens relied on trees for a backbone, functioned as temple or pleasure gardens, and had fountains and ponds, and relied on night blooming flowers since the day was too hot to venture out. With the water scarcity and the climate change conditions of overly hot summers and bitterly cold winters, we can’t afford lawns, fountains, and even sum­mer plants. Most of mine gave up the ghost this summer, and the perennials that remained had to make do with rationed water—thrice a week rather than daily.


In the gardens of the Taj Mahal, the British goal was to evoke the might, grandeur and orderliness of imperial rule. Lord Curzon reconstructed Taj Ganj, the entry to the Taj Mahal, by removing the bazaars and caravanserai outside. He couldn’t understand Shah Jahan’s vision

The plants that have survived are the native variety, ones that know how to cope with Delhi’s subtropical clime of blazing summers and cold winters, and are deciduous to boot. Our conception of a plant tends to focus on the lush green, and bare branches are seen as a blight on the landscape. But the reality is that bare branches of a few deciduous plants will frame the beauty of the seasonal flowers.

How we see nature is also about how we treat seasons: do we allow the ferocity of summer to show itself or do we hide it with a wall of green? To bring in the seasons, one also needs bareness. Pearson advises that “to avoid them becoming the dominating force, evergreens should be used with levity. Light should be allowed to fall to earth and, with it, room given for deciduous plants to come and go.”

Planting in masses, creating islands of calm with fountains and groves and ruins are part of my picture when I think of a garden. I’ve created a grove in my balcony garden—a syngonium draped around a tree stump with a stone Buddha’s head, guarded by a dead bottle brush tree, sur­rounded by pots of short leaf-green bam­boo grass and roses. I had a lovely champa plant with pale yellow flowers and lime green leaves. It bore five or six flowers even though it was a slender trunk. The scent was intense, rich and sweet. Unfortu­nately it died during a sudden cold spell in winter. I got another one, and the same thing happened, this time during a sudden hot spell in early summer. Turns out, the plant dislikes sudden changes of temperature. Had it been sheltered better by trees or other plants, perhaps it may have survived. The point is that the mystery, veils and clustering effect of older Indian gardens had another purpose—to shield the vulnerable plants from the vagaries of such weather. But with the water scarcity, we cannot afford these essential elements of the old gardens.

Gardening styles are changing as more people flock to cities and live in smaller spaces. Covid-19 increased the interest in gardening, but the emphasis for many is on growing vegetables rather than flowers, and traditional front garden plants. The water guzzling lawns, a throwback of the British nostalgia for England, have been replaced by high-rises and multi-storeyed buildings, but lawns continue in Lutyens’ Delhi, and in the wealthy bungalows and swanky rooftop terraces in India. As do the English annuals—chrysanthemums, Sweet William, larkspur and so on. But change has come. The seasonal plants available in the plant nurseries continue to keep the colonial era plants while also incorporating newer hybrids to suit younger tastes. As we march to the first quarter of the 21st cen­tury, our gardens in India continue to braid and celebrate the wild and the natural forms in some semblance of order.