Ashok Gehlot talked about the revolt of the ministers in the Pilot camp, named them and said they would now have to change their attitude 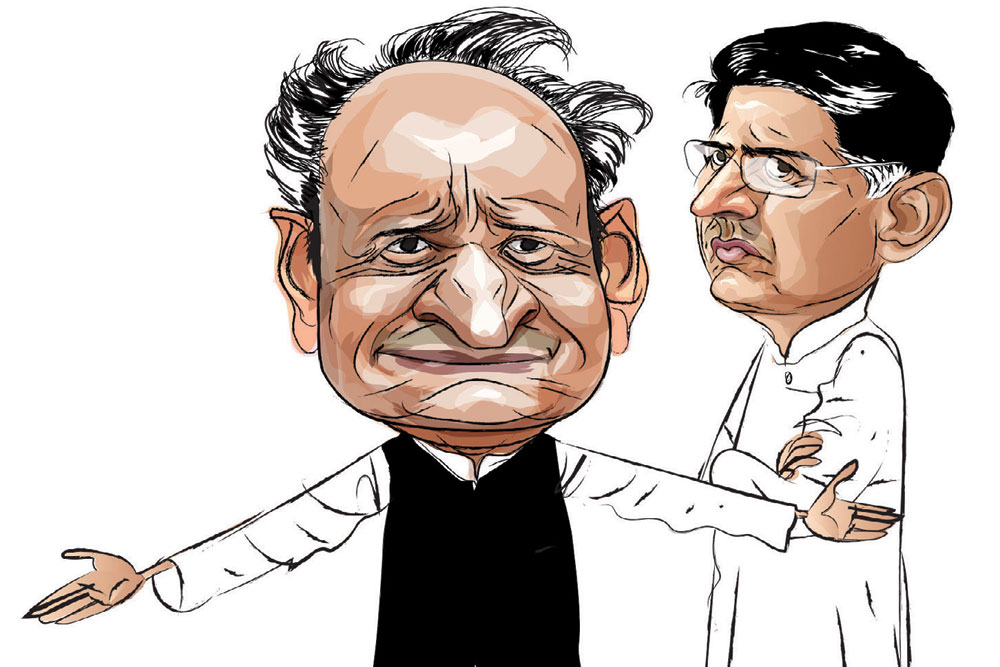 
IN RAJASTHAN POLITICS, there have been many efforts by the Congress high command to end the battle between Chief Minister Ashok Gehlot and Sachin Pilot. After the cabinet expansion, where a number of Pilot supporters got berths, they thought that there would be a ‘ceasefire’. But that doesn’t seem to be the case. Gehlot once again taunted ministers and MLAs in the Pilot camp publicly. It was an informal meeting of ministers at his residence. All India Congress Committee organisational secretary KC Venugopal and the party’s Rajasthan in-charge Ajay Maken were also in attendance. Gehlot talked about the revolt of the ministers in the Pilot camp, named them and said they would now have to change their attitude. Pilot, meanwhile, is said to be unhappy with the portfolios his people have got.

IN PUNJAB, THE ruling Congress is in troubled waters with a lot of disgruntled leaders looking at the Bharatiya Janata Party (BJP), Aam Aadmi Party (AAP) and Amarinder Singh’s Punjab Lok Congress as options. The Congress high command is worried, especially of desertion by Sikh community leaders. Daily inputs from state intelligence, political leaders and journalists are being compiled. Rahul Gandhi is also reportedly keen on knowing what Trinamool Congress is planning for Punjab.

There is a trend of BJP Union ministers writing all kinds of books, from novels to non-fiction. The latest on the bandwagon is Bhupender Yadav. His book is titled The Rise of the BJP and it takes a deep dive into how the party rose to its dominant position in Indian politics today. It is co-authored by economist Ila Patnaik.

CONGRESS LEADER RAHUL GANDHI has always been uncomfortable with the Shiv Sena although his party is in alliance with it in Maharashtra. He, therefore, tries to maintain a distance from the Sena. Recently, he said Congress was supporting the government, but was not involved in policy formation and governance. The person Shiv Sena has given the responsibility of coordinating with Rahul is their Rajya Sabha leader Priyanka Chaturvedi. She was a Congress spokesperson before jumping ship, but still has a good relationship with Rahul and Priyanka Gandhi. Sena head Uddhav Thackeray’s advice to her is to keep Rahul updated on everything the government is doing. Rahul recently also called Thackeray and enquired after his health when he was in hospital. It was a long conversation, suggestive of the ice melting between the two.

AFTER UNION MINISTER Smriti Irani’s astonishing weight loss, many other MPs are following suit. The latest is Dravida Munnetra Kazhagam leader Kanimozhi. She was a member of the gym at Constitution Club, but was not a regular. She has now become diligent about working out and has also brought down her weight.

SAMAJWADI PARTY head Akhilesh Yadav may be firm on not giving a single seat to Congress, but he still has to manage all the other parties he does want to ally with.Rashtriya Lok Dal wants a minimum of 36 seats and there are all the other smaller parties, with important bases, that want their pound of flesh. Akhilesh needs them for a caste-based new alliance that will bring them to power, but he does not want to give too many tickets away since his own position might become vulnerable after the polls.

IN TAMIL NADU, VK Sasikala is again making a serious bid to come back to the All India Anna Dravida Munnetra Kazhagam (AIADMK). Sensing danger from her, two antagonistic groups in the party, led by E Palaniswami and O Panneerselvam, have joined forces. The party has even changed its constitution; earlier, only the general secretary was the source of power, but there is a dual leadership of the two now. AIADMK’s ally in the state, BJP, is maintaining a good relationship with all three, adopting a wait-and-watch approach.

THE ELECTION CAMPAIGN for the Kolkata Municipal Corporation has begun. The big factor may be women. Of around 40 lakh voters, they make up 47 per cent. Trinamool Congress leader Mamata Banerjee has put up a lot of women candidates, but a peculiar problem is that many of them are busy with the marriages of their children. And yet, the campaign is underway at the same time.

JAWHAR SIRCAR IS the new Rajya Sabha member of Trinamool Congress. But Parliament is not new to him. A former bureaucrat, he was earlier culture secretary and chief executive officer of Prasar Bharati. When his contemporaries ask him, as a man of culture, why he got into politics, his reply is standard—that his parents named their children after great leaders. He is Jawhar after Jawaharlal Nehru, while his two brothers are named Subhash and Gandhi, after Subhas Chandra Bose and Mahatma Gandhi. Therefore, he says, he was perhaps born to politics.