Look who has lost faith in Indian democracy 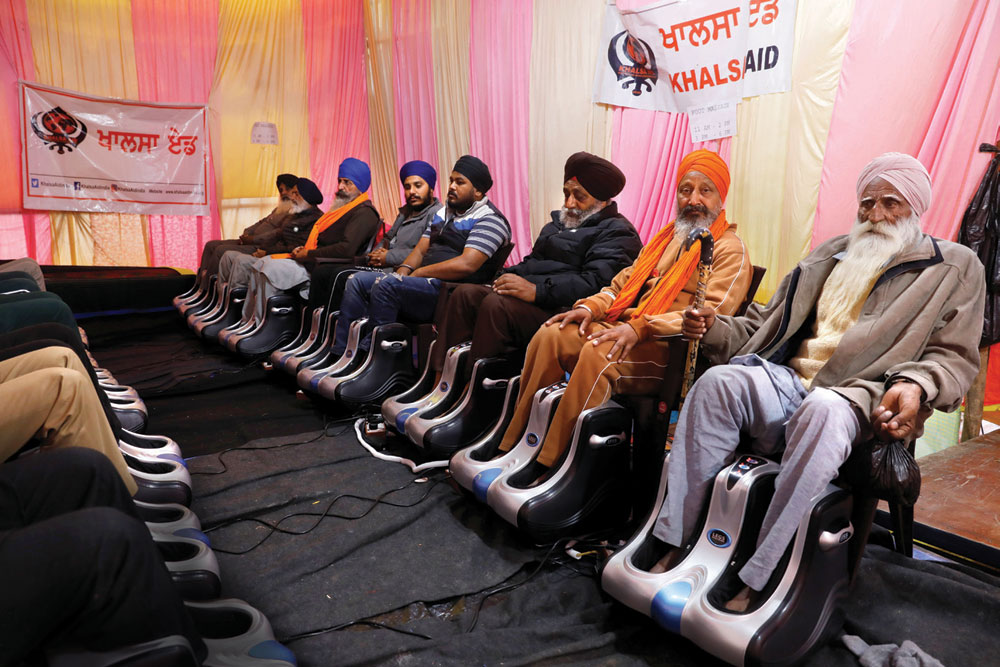 Farmers on massage chairs at their protest site at Singhu on the Delhi-Haryana border, December 15, 2020 (Photo: Reuters)


BORIS JOHNSON, WITH his cultivated air of dishevelment, won’t be missed on India’s Republic Day. It’s as good a time as any though to assess where India stands 71 years after the Constitution was adopted.

Is he right? For farmers who continue to protest in large numbers in Delhi against the suspended farm laws in defiance of both the Government and the Supreme Court, their freedom of expression unimpeded, democracy in India appears in rude health.

Democracy is ideology-agnostic. It gives free rein to even those who in the manner of a drain inspector look for a problem in every solution rather than for a solution in every problem. This has now developed into a thriving cottage industry, ironically on the heels of the prime minister’s aatmanirbhar exhortation to “Make in India”.

Like Make in India products from other industries, there is an imported component here as well. Protesting farmers, for example, have imports from Canada. Deprived of exposing India’s alleged lack of democracy in front of the global media which would have accompanied Boris Johnson on January 26th had he not cancelled, the protestors by vowing nonetheless to disrupt Republic Day have unwittingly showcased the freedoms available under the broad tent of Indian democracy.

When India won Independence, few gave the new country longevity. They have been proved wrong. Instead of breaking up into balkanised pieces, India consolidated: it subdued Hyderabad in six days, Goa in two days. Sikkim became a part of the Republic in 1975. Far from splintering, India expanded into 28 states and eight Union Territories.

The prophets of doom were dismayed. How could a country, bled dry by 190 years of brutish British depredation, be on the cusp of becoming the world’s third-largest economy a mere seven decades after Independence? The ascent, as both the World Bank and the International Monetary Fund have clinically noted, will take place around 2030, placing India’s GDP behind only the US and China and ahead of Japan and Germany.

India’s Nawabs of Negativity are mortified. How could this come to pass? India wasn’t supposed to prosper or stay in one piece.

Indian political leaders have done their bit to lend credibility to the false prophets of doom and slow India’s inevitable rise with a litany of missteps. Jawaharlal Nehru mishandled China and Pakistan. Indira Gandhi stalled the economy. Manmohan Singh allowed himself to be remote-controlled. And now Narendra Modi is giving back the bureaucracy the power it lost in the years following economic liberalisation.


Those who control the narrative in India rarely speak truth to power. They distort and dissemble. Activists and opposition leaders backing farmers’ protests twisted the narrative by claiming that the protestors were called Khalistanis

India’s bureaucrats and regulators can’t believe their luck. They issue rules that deliberately seek to obfuscate. Guidelines recently issued for cosmetic products by the Union Ministry of Consumer Affairs, Food and Public Distribution run into dozens of mindnumbing pages. In the US, regulatory guidelines for similar products are covered in three pages.

Democracy has clear guidelines. One, freedom of expression is precious. Don’t abuse it by inciting violence. Two, freedom to protest is a non-negotiable right—as long as it does not endanger the lives of others or obstructs their livelihoods.

Those who control the narrative in India rarely speak truth to power. They distort and dissemble. Activists and opposition leaders backing farmers’ protests twisted the narrative by claiming that the protestors were called Khalistanis.

They were not. The charge was that a small minority of Khalistani separatists—as the attorney general told the Supreme Court—had infiltrated farmers’ protests. A drop of ink can darken a bowl of clear water.

The art of dissembling and distorting the narrative has been finely honed since 2014. The fraudulent narrative is strengthened by the Modi Government’s inept and infrequent briefings. Nature abhors a vacuum. Disinformation revels in it.

Engagement across the ideological aisle is the heartbeat of democracy. Issues, not ideology, should govern opinion. On social and cultural issues, lean left. On economics and business, lean right. Overall, stay dead centre.

The Modi Government’s policies have been a curious mix of excellent and mediocre. They need clear-eyed criticism, not doomsday prophecies.