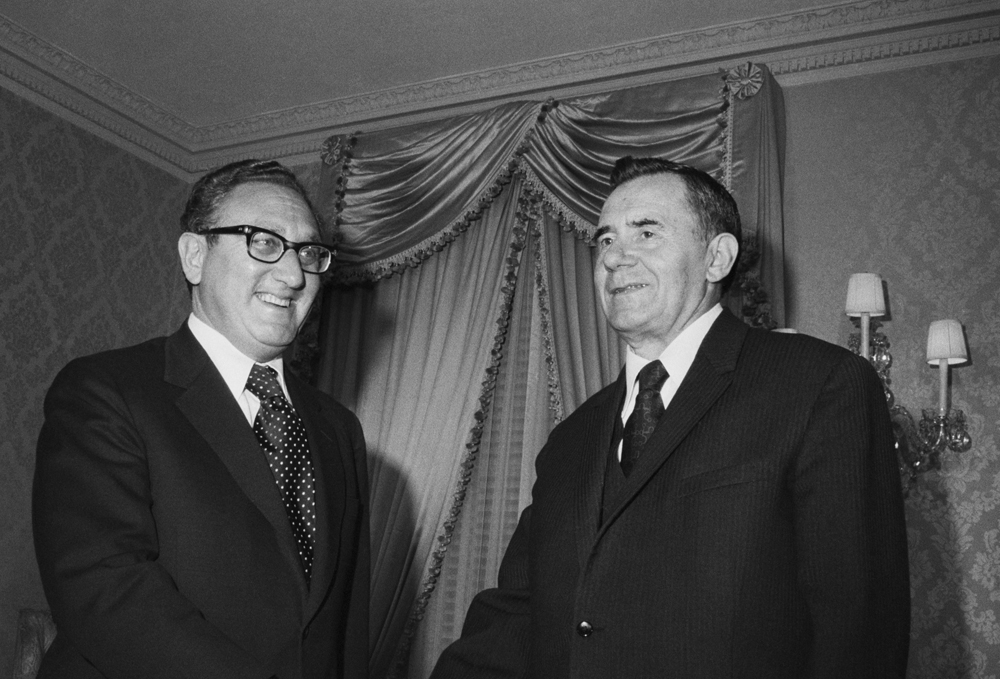 
“The lights are going out all over Europe. I do not think they will be lit again in our lifetime.”

Those sad words came from Sir Edward Grey, Britain’s foreign secretary, as the dark shadows of war loomed over Europe in 1914. He would die in 1933, the year Adolf Hitler rose to power in Germany.

The world of foreign ministers is as intriguing as interesting. The very portfolio is a hint of the larger issues—away from the humdrum circumstances of a domestic nature their colleagues at other ministries are forever performing—they happen to be dealing with.

Take the instance of the late Prince Saud bin Faisal, the long-term Saudi foreign minister who died not long ago at 75. He spent no fewer than 40 of those 75 years as his country’s foreign minister. You might wonder why he was there for such a long stretch of time. Obviously the Saudi government, in this case the royal family of which Faisal was a deeply respected member, thought he was the one man who could present his country well before the outside world as it went through convulsions of a myriad nature.

Prince Faisal was suave and well-read and was always an image of sophistication within the councils of the globe. The West liked him, and not only because he spoke their own language. He was quite capable of pressing his own point of view before his Western counterparts when he felt it necessary. And don’t forget that, in the final analysis, his was—and is—an oil-rich country the West could not afford to ignore or antagonise.

Of course, not every country possesses the oil-driven clout that Saudi Arabia has had in the world. There are all the other compelling circumstances which give foreign ministers around the world the kind of influence they would not have had if those circumstances were not there. Back in the days of the Soviet Union, Andrei Gromyko was a ubiquitous presence on the global stage not merely because of his grasp of global political issues but also because his tenure as Soviet foreign minister was of an unusually long stretch.

First appointed to the position by Nikita Khrushchev in the mid-1950s (he had earlier served in influential diplomatic positions, particularly in the post-war period), Gromyko continued in that position right till the early stages of the Mikhail Gorbachev leadership. Gromyko’s had always been a difficult task, an instance of which comes through the cool attitude he maintained in his talks with President John F Kennedy at the White House in 1962 even as the US president knew of the presence of Soviet missiles in Cuba. Kennedy gave no hint of what he knew. And Gromyko did not reveal that he knew, if at all, that the Americans were in the know.

Gromyko, known as the ‘nyet’ man because of the ‘no’ he voiced at nearly every crucial meeting of such bodies as the United Nations Security Council, survived through the leadership of the Brezhnev-Podgorny-Kosygin troika and then the brief spells of leadership by Yuri Andropov and Konstantin Chernenko.

In the early phase of Gorbachev’s leadership, he stayed on as foreign minister but was soon shunted upstairs to the presidency of the Soviet Union. Clearly, Gorbachev had little desire to pursue his glasnost and perestroika reforms with the relics of the past and so Gromyko was effectively neutralised. He replaced the veteran with Eduard Shevardnadze.

It remains a matter of irony that the twilight of Gromyko’s career almost coincided with the end of the Soviet Union itself. In post-Soviet Russia, it became Sergei Lavrov’s job to convince the world that despite the end of communism and the splintering of the old empire established by Lenin and consolidated by Stalin, Moscow still mattered.

You only need to observe the single-minded decisiveness with which Vladimir Putin has been moving ahead, through his policy on Ukraine and Crimea and his defiance of the West, to understand that Russia matters again. Russia has always mattered, especially since Catherine and Peter. And it will matter.

At the same time, he did not ignore the need for détente with the Soviet Union. In the times before he was actually appointed secretary of state in 1973, Kissinger was de facto the chief American diplomat, to a point where he and President Nixon repeatedly and deliberately undermined Secretary of State William P Rogers through not keeping him informed of their foreign policy related acts. American foreign policy under Nixon did not have any place for William Rogers.

Kissinger’s has been a brilliant analytical mind. His explorations of the diplomacy of Castlereagh, Metternich and Talleyrand have shaped his view of the world he has inhabited. His forays in the Middle East, his role in the destruction of Cambodia in his pursuit of an end to the Vietnam War have held him up as a dominant figure in modern global diplomacy. His acceptance of the Nobel Prize for Peace, which he shared with Vietnam’s Le Duc Tho and which the latter declined to take because peace in Vietnam was a goal yet to be reached, showed him up to be an individual in whom the amoral was all.

And yet his books, ranging from reflections on his White House experience under Nixon and Gerald Ford to his studies on China to his observations on global order, have been emblematic of a disciplined, well-ordered mind. It is hardly surprising, therefore, that every US secretary of state who has come after Kissinger has unconsciously, sometimes not so unconsciously, sought to emulate him. The effort has been futile. Kissinger is these days, at 98, writing two new books, on leadership and artificial intelligence.

Foreign ministers in countries with less global reach than America, Russia and Saudi Arabia, at least in the recent past, have had their own influence to shape in their leadership of their ministries. Marshal Chen Yi bravely went on presenting a Cultural Revolution-convulsed China to the outside world in the 1960s even as men like President Liu Shaoqi lost power and found themselves lodged in prison, courtesy of the Great Helmsman’s directives.

In an Indonesia in revolutionary ferment under Ahmad Sukarno, it was Subandrio’s job as foreign minister to explain his president’s policy of konfrontasi with Malaysia to the international community. Subandrio’s fate was sealed in Suharto’s times, when post-1965 Jakarta saw him sentenced to death by the military. He spent decades on death row before being pardoned. In his newfound freedom, he said not a word.

Subandrio’s experience was effectively a glorification of the Indonesian ideal as also its terrible mutilation. Suharto’s foreign minister Adam Malik was never to reach the intellectual or charismatic heights that underlined the Subandrio character.

In Germany, Willy Brandt (before he became chancellor), Walter Scheel and Hans-Dietrich Genscher served as foreign ministers of distinction in much the same way that Maurice Couve de Murville did under Charles de Gaulle in France. Abdelaziz Bouteflika, before he became Algerian president, served for years as his country’s respected foreign minister. K Natwar Singh might have done a good job in India had not the oil-for-food programme destroyed him only months into his taking charge as foreign minister.

Iran’s Ardeshir Zahedi was a glamorous presence under the Shah, with little impact on foreign policy. In Sri Lanka, Lakshman Kadirgamar was a suave, articulate and wise presence as foreign minister, a position he utilised to good effect to project his country abroad even as his government battled the ferocious Tamil Tigers. His assassination was a blow to diplomatic finesse.

Foreign ministers are or ought to be individuals possessed of a good, enlightened worldview. Many of them are. Many more simply preside over their ministries in lacklustre fashion and then move on. Many of them have a tough job at hand, of representing a not-so-good regime abroad, as Tariq Aziz did in the case of Saddam-ruled Iraq.

Some others use the job to reshape foreign policy for their countries before making a leap for power, even if it means undermining their benefactors. Read Pakistan’s Zulfikar Ali Bhutto here. He gave his country’s diplomacy a pro-China tilt in the 1960s before eventually turning the guns on President Ayub Khan, the man to whom he owed his job.

And then of course, remember the pivotal role an urbane Kamal Hossain played as Bangladesh’s foreign minister in the government of Bangabandhu Sheikh Mujibur Rahman in the early 1970s. The sophistication he brought to Bangladesh’s diplomacy has remained unmatched in all the years since he last served in government.

There are other names in the pantheon of foreign ministers we recall. John Foster Dulles had a big impact on 1950s US foreign policy than Dean Rusk in the 1960s. But yes, there was the very influential Dean Acheson in the pre-Eisenhower era. Carlos P Romulo was the voice of the Philippines abroad decades ago, respected for his wisdom. Chaudhry Zafrullah Khan, Pakistan’s first foreign minister, later served as president of the UN General Assembly. In Iran, Javad Zarif has a tough job selling his country to the world. He does it well. MC Chagla and Sardar Swaran are names we remember from India. Michael Stewart, George Brown and Robin Cook are almost forgotten in Britain.

In the Middle East, there was the scholarly Abba Eban in Israel. When Anwar Sadat visited Jerusalem in 1977, his foreign minister Ismail Fahmi resigned in protest. Tedros Adhanom Ghebreyesus, director general of the World Health Organization, did a good job, prior to moving to Geneva, as foreign minister of Ethiopia. Three women—Madeleine Albright, Condoleezza Rice, Hillary Clinton—have served with distinction as US secretaries of state. Hina Rabbani Khar was a brief spring in Pakistan’s diplomacy.

Of course, Joachim von Ribbentrop, foreign minister in Nazi Germany, went to the gallows after the Nuremberg Trials in October 1946.