Her visit is an opportunity India cannot afford to miss 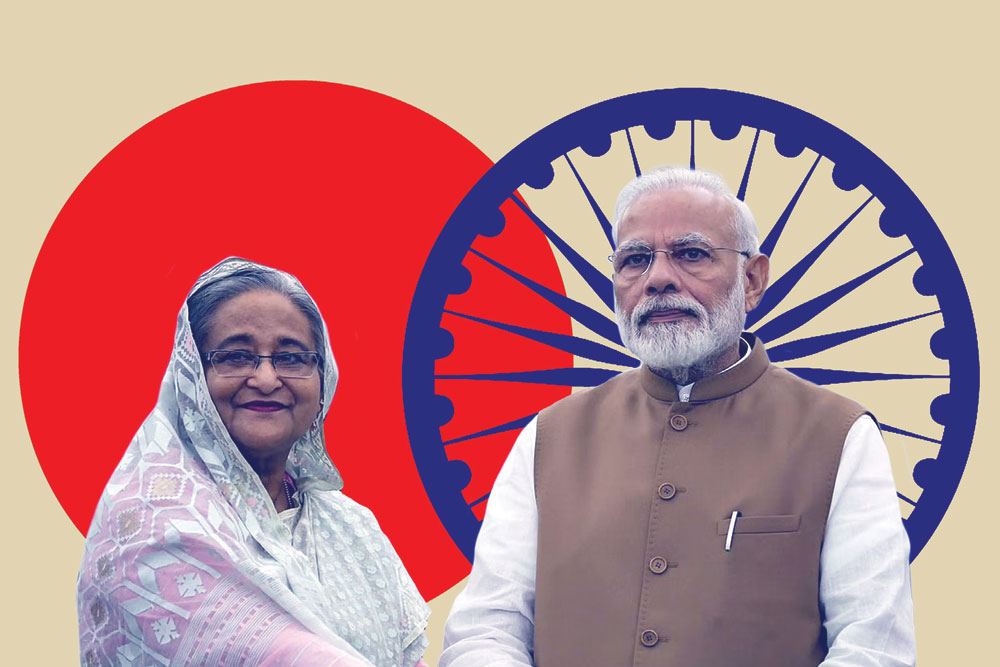 
DESPITE ITS MULTIPLE problems over the decades, Bangladesh, with 168.2 million people, is now considered one of the fast-growing economies. Whereas 44 per cent of its population lived in extreme poverty in 1990, the year in which the military rule of 15 years was toppled, that figure is now halved. There are more girls in schools than boys, and the presence of females in the workforce is higher than in India. From 1in 5 child deaths before the age of five, that figure now is 1 in 30. Major assets have been the inflow of remittances from overseas Bangladeshis, NGO activity led by BRAC and the Grameen Bank, and adult literacy which is now at over 70 per cent, and a fertility rate of below three per household.

It is doubtful if India’s ties with close neighbour Bangladesh have been better in terms of economy, trade and connectivity. Two-way trade has increased from $10 billion to $18 billion, of which Bangladesh exports have reached $2 billion, but the imbalance in favour of India partly conceals the value addition to Dhaka’s export basket, composed mainly of readymade garments, which is now valued at $34 billion—a higher figure for such items than for all of Africa. Cross-border smuggling was always reckoned to constitute a large percentage of bilateral trade but remains impossible to quantify.

An Indian line of credit of $1 billion has been extended to Bangladesh for India-executed capital projects, apart from $700 million worth of foreign direct investment from India, which adds to considerable job creation. Some anti-Indian sentiment is generated about the number of Indians working in Bangladesh but the actual figure may be closer to 15, 000 than the 100,000 propagated by India’s denigrators.

The shortage of power remains an acute problem in Bangladesh and a 1,300 MW coal-based power plant is being set up in Mongla as a joint venture with India. Power from Tripura in the east and the Indian grid from the west are delivered on commercial terms, but at a cheaper rate than energy from other sources.

In terms of connectivity, transit trade to Tripura and Meghalaya by inland waterways and sea-cum-land is prospering, and a new rail link has been opened between Bangladesh and North Bengal for freight and passenger traffic.

During the Covid pandemic, there were large supplies in India of oxygen and vaccines, and liquid oxygen plants have been established in Chittagong and Dhaka.

The current Ganges water-sharing agreement terminates in 2026, and discussions have tentatively begun that promise a consideration of all trans-border rivers in their totality, bearing in mind the current lack of storage and the continuous depletion of flows due to human encroachments and withdrawals on both sides of the border.

Beyond such details, a significant feature of the existing state of relations is the growing governmental view on both sides of the border of the value of good India-Bangladesh ties, despite persistent and legitimate concerns about the welfare of Hindus in Bangladesh and that of Muslims in India.
Much credit for this momentum is due to the current Indian high commissioner, who has however been transferred to another location more than a year short of his normal tenure.

Against this background, what is worrying is the domestic situation in Bangladesh and its fragmented polity, which is causing anxiety to observers both within and outside the country. The governing Awami League, which has won the past three elections since 2008, is beleaguered by accusations of uncontrolled price rises, including for essentials like food and energy, corruption, a family-oriented personality cult and rhetoric, power shortages and Islamisation. Some of these criticisms can be explained by what befalls any political party that has been in power for a lengthy period, and the consequence of the Ukraine war and the Covid-19 pandemic, but others seem attributed to the lack of good governance.


What is worrying is the domestic situation in Bangladesh and its fragmented polity, which is causing anxiety to observers both within and outside the country. The governing Awami League is beleaguered by accusations of uncontrolled price rises, corruption, power shortages and growing islamisation

Mosque-building in each of the 1,500 upazillas in the country has been encouraged and supported with finance from Saudi Arabia, and madrasa higher education has been equated to normal school-leaving standards. This suggests government endorsement, for political reasons, of growing Islamisation in Bangladesh despite evidence of an increased degree of radicalisation. China and Pakistan, for their own reasons, are encouraging this trend, although the government is aware of Indian concerns.

Dhaka has raised fuel prices by more than 50 per cent in a recent week, petrol prices rising from 91 cents a litre to $1.37 and diesel and kerosene by over 42 per cent. Thousands have taken to the streets in protest in scenes reminiscent of the civil unrest in Sri Lanka, calling for the increases to be reversed. The protests have been sporadic, but resentment is growing. Foreign exchange reserves are falling, and yet another South Asian nation now faces a growing financial crisis. In July, Bangladesh became the third South Asian nation to seek a loan from the International Monetary Fund after Sri Lanka and Pakistan.

To add to the Dhaka government’s worries, the US has fired a warning salvo about the freedom and fairness of the next elections, due in December 2023, and human rights violations with the sanctioning of the Rapid Action Battalion. The US has double leverage due to its import of 30 per cent of Bangladesh’s readymade garment exports and its oversight as a permanent member of the UN Security Council over UN peacekeeping operations. The Bangladesh army is highly conscious of the benefits of participation in such operations and would not want that facility curtailed. These public US admonitions may have influenced Prime Minister Sheikh Hasina’s reluctance so far to purchase Russian oil at discounted prices.

For all the positives in the bilateral relationship, India retains a perception problem in Bangladesh because there continues to be an anti-Indian sentiment, and not restricted to only the anti-Indian bigots and Islamists of yesteryears but as an undercurrent discerned among all levels of society. This is related to the rise of Hindutva politics in India and anti-Bangladesh rhetoric generated by those at the highest levels of Indian politics around issues such as illegal migration, the Citizenship Amendment Act and the National Register of Citizens. Successive Indian governments, and particularly the latest, have failed to grasp the political cost to Hasina and her party of being perceived as under India’s influence, and how hard she has to work to dampen anti-Indian, anti-Hindu minority sentiment in the country. Perhaps the influence of Delhi is overstated but perceptions are important.

It is to be hoped that some of these issues will be raised for candid discussion when Hasina visits India officially.