Lament for a Lost City

August, the foundation month of Madras, is a time for reminiscing about the beauty that can no longer be found in Chennai 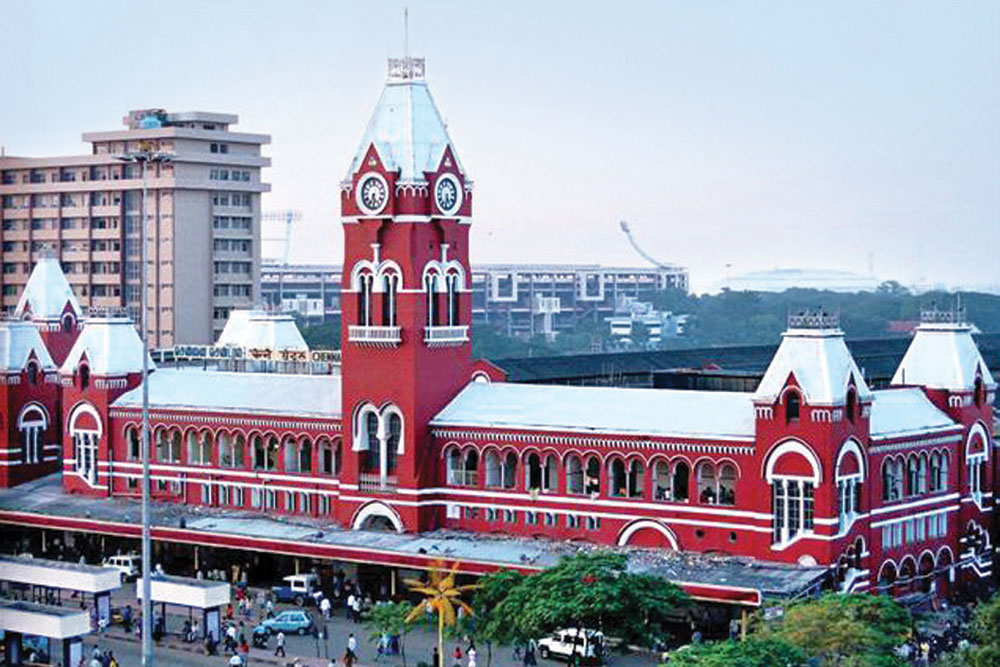 
IT WAS THE year 1600. The Dutch, who were trading with India, raised the price of pepper by 5 shillings. Alarmed, 24 merchants in London established the East India Company to corner the Indian trade in pepper, followed by cotton, silk, indigo and, later, tea and opium. They went on to take over the country, the first time a corporate entity annexed an entire nation.

Francis Day, the English agent and chief of the Armagaum factory near Pulicat, had a Portuguese mistress who lived in Mylapore, one of the villages that were to make up Madras. On August 22nd, 1639, Damarla Venkatapathy Nayakar, governor of Wandiwash, and Francis Day signed an agreement to lease a three-mile long strip of land and a fishing village called Madrasapattanam to the Company. This date is celebrated as Madras Day every year. The land belonged to the Raja of Chandragiri, a representative of the House of Vijayanagar, and the lease permitted the Company to build a fort there. Venkatapathy Nayakar slipped in a clause that the area would be named Chennapattinam after his father Chennappa Nayakar, who never visited Madras either before or after this lease. And the British, as always, went back on the promise and the new city was known as Madras, the original name as known to the local people, who referred to it either as Madras or as Pattanam, never Chennai. There is a theory that it was named after the Portuguese Madra family, according to an inscription found at Luz Church, Mylapore. Madras did not have a natural harbour and there were better sites elsewhere. Day was criticised by the ship captains for the problems faced when anchoring ships in Madras. During the Carnatic wars, the English fleet was rendered useless, having to move out to sea at low tide. Merchants, too, were angry that they had to wait until high tide to bring goods and passengers ashore. But Francis Day’s Portuguese mistress tipped the balance and Madras fell to the East India Company. Corruption won the day.

I did a book for Roli called Madras Then Chennai Now, along with Tishani Doshi and Pramod Kapoor. It was a fascinating voyage of discovery through old paintings, prints and photographs of a laidback city of leisure. Not many are aware that the first Palaeolithic relic of India was found here by Robert Bruce Foote, or that the area was filled with mesoliths, neoliths and megaliths. The region was probably the southern end of Ashoka’s empire, for that monarch built a stupa in nearby Kanchipuram.

Madras is a city where myth and history mingle freely, from the marriage of Parvati, the peahen, with Shiva to the unhistorical visit and mythical death of St Thomas in Mylapore. Mylarphan or Mayilapur was referred to in 200 CE by Graeco-Roman geographer Ptolemy, and a plethora of notables have visited the city: Marco Polo, Niccolò dé Conti, Duarte Barbosa and George Correa, to name a few. Yet, it was once a tiger-infested jungle called Puliyur whose wild predators were hunted to extinction by the trigger-happy British.

All was well till the advent of the British. The fort was built in 1640. St Mary’s Church—the oldest British building in India—inside the fort by 1680 hosted several notable events: the marriage of Elihu Yale (of Yale University fame), the wedding of Robert Clive and the baptism of the daughters of Job Charnock, founder of Calcutta. As the British built Fort St George (now the home of the Tamil Nadu Assembly and the offices of the ministers), traders started moving in: Telugu Chettys, Gujaratis, Saurashtras, Marwaris, Armenians and the British were also among the earliest to arrive. The early years were all about wars between the British and the French who were stationed at nearby Pondicherry. The city has several firsts to its credit: India’s first municipal corporation, general hospital, English education and so on. All this went on even as the city was attacked by the French, Mughals, Marathas and the Nawabs of Golconda and the Carnatic. Hyder Ali appeared at the gates of the city, destroying a few temples along the way, but was persuaded to sign a treaty of alliance with the British and go back. The crafty British were lending large sums of money to the Nawab of Arcot and, when he could not repay, took away the jagir of Chengalpattu. The Nawab got hopelessly tangled in a plot to depose the ruler of Thanjavur and usurp his lands, and finally had to give up all his lands in the Carnatic to the British in return for a pension.

The early years of British rule were devastating for the environment. The frequent wars meant that trees were cut down so that the French arriving from the south could not hide behind them. The tigers, leopards and peacocks (Mylapore is named after the peacock) for which the city was famous, were hunted out of existence. Meanwhile, the Indians resented the British and a mutiny broke out in Vellore Fort in 1806—half-a-century before 1857—killing 200 British troops before they were subdued and blown out of existence. However, the city was clean, with tree-lined avenues and beautiful gardens.

In 1774, by the terms of Pitt’s India Act, Madras was made subordinate to Calcutta. The growing importance of the latter meant the growth of Madras slowed down. In the 19th century, Mark Twain visited Madras and said:

Clive kissed me on the mouth and eyes and brow,
Wonderful kisses, so that I became
Crowned above Queens – a withered beldame now,
Brooding on ancient fame

But Madras survived and stayed its same lazy self, till Independence. Classical music and dance grew in importance, and performing at a sabha during the music season was an honour for every musician. Dr Annie Besant started the Home Rule League and was fighting for dominion status. Apart from classical Carnatic music, the city was also the home of folk music and classical Western music. Indo-Saracenic art was envisaged and appeared here for the first time while the first Art Deco building was built here in 1938. It was a city of regal houses and green canopies. The city housed the World Theosophical Society. Madras was famed for its greenery, its beaches and its cleanliness.

After Independence, there was not much change. Madras got India’s tallest building—the LIC on Mount Road, and several industrial estates which encouraged the small and medium sectors. MS Subbulakshmi and Balasaraswati rocked the world. Ramanathan Krishnan became a tennis legend while India won its first Test match against England in 1952.

The big change began in the 1960s. Till then, the Dravidian movement was mired in controversies, such as the transition from the Justice Party to Dravida Kazhagam (DK), which rejected Independence; DK split consequent to Periyar’s marriage to Maniammai; and the formation of DMK. Congress handed the state on a platter to DMK by trying to force Hindi, which the state had been opposing since the freedom movement. This time they went further by calling out troops to fire on students. Needless to say, when the elections were announced in 1967, Congress was wiped out and never regained primacy in Tamil Nadu.

Madras State became Tamil Nadu in 1969 and Tamil pride was the main issue. In 1998, Madras became Chennai—to make a point. Unfortunately, DMK did not realise that Chennappa Nayakar was a Telugu, not a Tamilian, and for all their Tamil pride, the city got a new Telugu name!

The 1990s changed Madras. The IT boom hit the city and south Chennai started blooming with IT parks. The roads to Mahabalipuram—Old Mahabalipuram Road and East Coast Road—were now the localities of a flashy new city with glass-fronted buildings, McDonald’s and KFC. Seven auto companies moved here, giving Chennai the name “Detroit of India”. Medical tourism also became popular as foreigners came to Chennai for cheap medical treatment. Meanwhile, north Chennai was a hell on earth, with the oil refinery, thermal power stations and heavy industries.

With DMK came a new culture. DMK and its off shoot, AIADMK, were led by film script writer Karunanidhi and film stars MGR and Jayalalithaa, respectively, who brought a new cinematic lifestyle, with loud and enormous cardboard cutouts of themselves decorating the roads. Politically, DMK and AIADMK were two sides of a coin and their governments alternated. But DMK was virulently anti-Hindu, while AIADMK led by Jayalalithaa was deeply religious. The new millennium saw the two parties breathe fire at each other. It was a personal battle between Karunanidhi and Jayalalithaa, who never forgave DMK for physically abusing her in the Assembly in March 1989. Film culture became the substitute for folk culture. Fortunately, the classical arts lived on.

The two parties began importing their followers and their families into the city. Rural migration into Chennai caused the proliferation of slums, promoted by politicians, with open defecation and urination. The city became dirty: the two freshwater rivers were, by now, rivers of sewage; thousands of trees were cut down; several freshwater lakes were filled with garbage and sold to builders, while the temple tanks were left unsilted and could no longer be receptacles for fresh water. All this has resulted in a perennial water shortage with no solution in sight. The photographs of colourful plastic water pots lined up behind a hand pump has become Chennai’s defining image. While cyclones have been a regular feature of Madras, there were now floods and extreme climatic events. Traffic is chaotic, and the pollution of water and air is at unacceptable levels. Tamil Nadu became a land of freebies—TV sets, mixies and money for votes were distributed to the voters, so the masses living in the slums did not bother about the deteriorating living conditions. Corruption became a byword for both parties, and the public has accepted it as a part of life.

This was a massive change from the beautiful Madras, which was described in 1739 as having wide streets and numerous gardens “planted with mangoes, coconuts, guavas…where everybody had the liberty of walking and purchasing delicious fruits for a song.”

Both Karunanidhi and Jayalalithaa are gone and a new generation has taken over. The new chief minister promises a “Singaara (beautiful) Chennai”, but that requires tough decisions like removing slums, building wastewater plants, cleaning rivers, desilting temple tanks, controlling traffic, building pavements and so on. Will that be done?

Every August 22nd, the city celebrates Madras Day, and Madras month throughout August. It is a period when the city recollects its beautiful historical buildings, reminiscences over the greenery that once covered the place and the leisurely lifestyle that is lost in the din of traffic, sirens and loud cinema songs celebrating festivals and weddings. Interestingly, nobody calls it Chennai Day or Month: it is still Madras. Many organisations arrange events and honour people who have preserved heritage, while newspapers roll out stories about Madras then and now. And they lament the loss of their city as it was. Will we ever go back to the lovely city of Madras, or will we continue to live in Chennai?