Celebrating the common experience of home, habitat and season 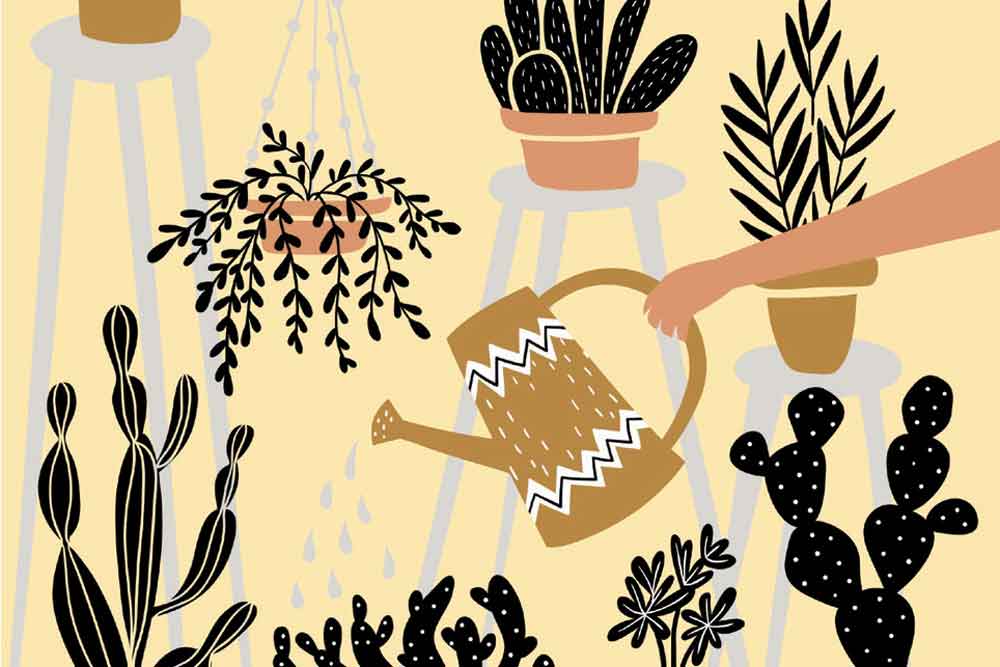 
COME SUMMER, I think of how my container garden will remain green, flowery, lush and fragrant, but with very little watering. But midway through summer I am doomed to disappointment, especially on my rooftop where only the deciduous perennials bloom, but even those look sickly after a couple of weeks of relentless heat. Experienced gardeners use green shade cloth to protect the plants from the summer sun. I loathe those shades. So what is to be done?

This April too, I began plotting ways to make my container plants drought resistant. Should I experiment with water-conserving crystals farmers use in their fields? These crystals hold water and release it slowly to the plants. What about transferring the water-devouring grasses and lantana to fibreglass containers from their current homes in terracotta pots? As for the annuals, should I only plant portulaca at the base of these perennials and forget about kochia grass which drinks tons of water? Last year, I tried to train the plants to be drought-resistant, but they weren’t happy. I had to let a number of annuals die to save the backbone of perennials in the garden.

Then I read writer and broadcaster Richard Mabey’s interview in The Guardian. Mabey is a British naturalist who was a nature writer before it came into fashion. Now in his eighties, he spoke about his thoughts on our relationship with nature during the lockdown. Neighbourliness, he says, is the key to a healthy and non-anthropocentric (manufactured empathy) relationship with nature. ‘Nature makes us ill,’ he says. ‘At times, we need to defend ourselves from ‘nature’ but also row back from the value judgements we make about certain parts of the natural world, because we need the whole thing kicking in together if the biosphere, including us, is to survive.’ The nature he is referring to includes not just the birds and flowers and trees, but also bacteria and viruses such as Covid-19. Some parts of nature make us ill, and others like gardens give us pleasure. The point, he says, is to think of nature in this whole way rather than excluding the more virulent elements in the phrase ‘reconnect with nature’. What does it mean to be neighbourly with nature? For Mabey, it means engaging with nature from the stance of sharing a place, and recognising our common experience of home and habitat and season. Neighbourliness then, is less than friendship but more than simply treating nature as an object.

This relational view has found champions in the world of science too. Scientists like Carlo Rovelli talk of a relational interpretation of quantum theory—the world we observe is better understood as a web of relations and interaction rather than objects. In his new book, Helgoland, he says that scientists as well as their measuring instruments are all part of nature. What quantum theory describes is ‘the way in which one part of nature manifests itself to any other single part of nature…how any physical entity acts on any other physical entity.’ To understand nature, he says, we must focus on these interactions rather than on isolated objects. ‘[A] tree absorbs energy from the sun’s rays, produces the oxygen that the villagers breathe while watching the stars, and the stars run through the galaxies, pulled by the gravity of other stars…The world that we observe is continuously interacting. It is a dense web of interactions.’ Rovelli points to the resonance with quantum theory of a 2nd century Buddhist text by scholar-saint Nagarjuna who says that nothing exists in itself unless it is in relation to something else.

It is this interdependence that infuses the stance of neighbourly engagement. It may even propel us towards treating trees, lakes and other biodiversity as living creatures eligible for a Bill of Rights. In March 2017, the Uttarakhand High Court granted legal personhood to the Ganga and Yamuna rivers, making it illegal to pollute or damage them. These rivers became the first non-human entity (if we don’t consider temple idols as entities) to be granted such rights in India. The judges cited the example of the Whanganui river, sacred to the Maoris, which was granted these rights by the New Zealand government. This is part of what nature writer Robert MacFarlane calls ‘new animism’. The word, he says, comes from the Latin anima, meaning spirit, breath, life.

Paraphrasing him, one could say that the courts, by reassigning both liveliness and vulnerability to the Ganga and Yamuna, displaces them from their instrumentalised roles as sump and source.

But allowing legal personhood to some forms of nature comes with a host of problems centering on accountability. Can you sue a river for flooding and wreaking damage to lives and livelihoods? Who would pay? These and other issues were cited by the Supreme Court of India in its order reversing the High Court judgment in July 2017. But the movement to bring nature into some sort of reciprocal relationship with humans is not going to fade away. The legal complications are being addressed as the movement picks up pace.


In the spirit of neighbourliness with the weather, water, and my plants, this summer I will not battle the elements. Instead, I have tried to devise a way my aspirations for the garden can coexist with these elements

In our own individual spaces, we have to change the texture of our relationship with nature, which would include our gardens and the weather. Paraphrasing Rovelli, let’s listen to nature instead in order to learn from it how to think about it. In the spirit of neighbourliness with the weather, water, and my plants, this summer I will not battle the elements. Instead, I have tried to devise a modus vivendi, a way my aspirations for the garden can coexist with these elements.

I have already started with water-conserving techniques. These include using water crystals, late-evening watering, clustering the pots in areas where the afternoon sun does not penetrate, using the few trees in containers to shelter the smaller plants, growing annuals like portulaca that hold water in their stems and leaves. Most importantly, I have whittled down the plants on the rooftop and intend to nurture them properly. Grow a few but grow them well—this has become my motto.

THE EXPERIMENT WITH water crystals has worked. These are supposed to be super-absorbent, absorbing 500 to 1,000 times its weight, and then releasing water slowly. The trick is to repot your plants, preferably in larger terracotta pots or in plastic/fibreglass ones (just for the summer, I promise), and while repotting, put a spoonful of the water crystal in the soil below the roots before you place the plant in it. That way, the water remains close to the roots, and with the heat, there is little chance of the roots dying because of waterlogging. I followed the same procedure for the sada bahar seedlings I planted in the ground, and they are thriving with a glass of water every three days. Some perennials like a Ficus benjamina tree could not be repotted but for those, two deep holes were made in the soil near their roots and the crystals were spooned in and covered with soil. None of my plants have died thus far, so the crystals seem to be biodegradable and non-toxic as advertised. I also conducted an experiment with palms. The palms in 12-inch terracotta pots had to be watered every day, but the ones that were transferred to plastic 10-inch pots needed water only every sixth day.

ONE MIGHT THINK that it wouldn’t be hard to adopt this way of thinking in India where the majority belonging to Hindu religion worship nature in all its forms as deities.

But the problem is that Hindus seem to compartmentalise their behaviour and relationship with nature. They may worship a tree in a temple, but trees are also felled needlessly. One tree is treated as a deity, and the other tree as an object.

In Culture and Reality: Essays on the Hindu System of Managing Foods, anthropologist RS Khare argues that Hindus have an instrumental relationship with food. Food is the path to divinity, but food is treated instrumentally; the production and consumption of food among Hindus is ultimately kept subservient to divine forces. This, he says, translates into a weak shared moral code, which might explain why the Hindu is ‘harsh and unyielding as a grain dealer, although he may be found generously engaged in conducting annadanam (a gift of grain) on an auspicious occasion.’ Is the engagement with nature transactional? If so, how do we transform it?

The pandemic has made us discover who our neighbours are, and also worry about their health. With these new waves of mutants and the accompanying lockdowns, we have a chance to overhaul our relationship with nature in all its forms: good, bad and ugly. As Mabey says in another piece in The Guardian, the concept of neighbourliness permits concern, shared circumstance, even love from afar, but demands no reciprocity. Perhaps that’s how we could reconnect with nature in its glorious and not-so-glorious forms.