Iran of the Mind

The challenges of writing about a place in permanent flux 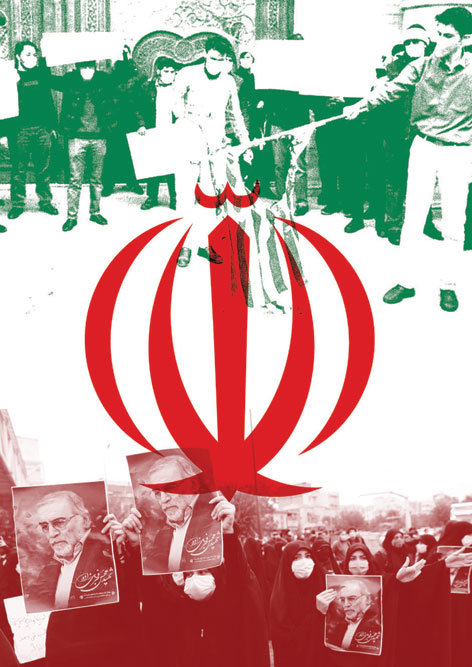 
ON JANUARY 3RD, Qasem Soleimani, the head of the Iranian military’s offensive capabilities, was assassinated. And then, after a long and seemingly unending year marked by a global pandemic and an extraordinary American presidential election, 2020 is now bookended with a certain macabre symmetry. On November 27th, Mohsen Fakhrizadeh, the head of the Iranian atomic bomb programme, was killed outside Tehran. Predictably, waves of public lamentation followed alongside vows of reprisal and revenge. A pall of martyrdom was evoked with melancholy and indignation was unleashed with well-practised ease—both of which shroud the more glaring fact: the Iranian security establishment is an open book for its enemies.

Seeing this public support for the deceased, I was reminded of a conversation chronicled in Christopher Thornton’s travels through Iran (Descendants of Cyrus: Travels through Everyday Iran), in which a man called Parviz tells the author, “The people have finally seen that there’s nothing inside these leaders. And the leaders have learned that the people are willing to fight them.” This was from 2009, when Mir-Hossein Mousavi and Mehdi Karroubi—two reform-minded politicians—were tipped to win. Much blood was spilt then, but the regime bosses eventually prevailed through the use of violence. Nearly a decade later, depending on when in 2020 you look, the Iranians have been repeatedly back in the streets. If on one occasion—frustrated by official lies about a downed Ukrainian Airlines plane—they declared ‘Death to the Ayatollah’, then another even larger crowd announced permanent fidelity to the memory of Qasem Soleimani, the Ayatollah’s military mastermind. What is one to make of a country where sentiments and loyalties shift with an alarming ease, often within days? This is not an Iranian phenomenon, even if such swings in public opinions are extravagant there, but rather an increasingly global trend. How must one write about such places, such societies where a permanent low-level agitation is always on and an agit-prop mindset is de facto rule? This is a state of affairs in which all sides involved refract all of life’s experience through a political lens. Ostensibly, these politically inflected claims echo the reality of the hour, which is why political journalists fashion themselves as arbiters of truth—and present themselves as clergy administering moral lessons for our secularised world.

In his anthology of the writings of Nikos Kazantzakis, the great Greek writer of mid-20th century, editor Peter Bien writes, ‘Politics is a good way to approach [Kazantzakis’ writings] because in Greece it stings everyone and everything. Nothing escapes. Language, the arts, religion, metaphysics, historiography, education, philosophy, even science and sports are subject to its inflammation.’ This omnipresent flood of all consuming politicisation of public spaces is now everywhere. The US, India, Israel, much of South America, to say nothing of authoritarian regimes such as Russia and China—our public imagination and personal lives are permeated with politics. In such a climate, travel writers who seek to describe another country or society are charged with an unenviable task. They might as well be tasked with describing the inner life of a schizophrenic.

I have often thought about Iran, for various personal (for a few years, I lived in Vancouver among many Iranian friends) and increasingly for intellectual reasons—Iran remains a permanent beachhead between the Arab worldviews on its west and the innumerable Indic subcultures that begin from Balochistan in the east; and its sociopolitical culture contains a host of responses to the West ranging from reactionary anger to unthinking emulation. But Iran also poses another kind of challenge, one that is familiar to travel writers in particular. How must one write about a country where so much is in flux? Faced with such a question, the most convenient method is to travel through its cities—Tehran, Tabriz, the Caspian shore, Mashhad, Kermanshah, Hamadan, Kashan, Abyaneh, Esfahan, Qom, Yazd, Persepolis and Shiraz—where each of these urban centres becomes a metonymy to explore different aspects of Iranian culture and life. This is, of course, an easy way out. Other writers such as Hooman Majd or Shahriar Mandanipour, who know Iran intimately, can write more cleverly and creatively. But for the rest of us—foreigners—this city-by-city approach is useful. There is no surprise in the choices of these cities or what each of them can stand for in a narrative—but there can be great profit in treading the familiar path to mine the unfamiliar.

VS Naipaul famously travelled through four Muslim countries in the late 1970s and was able to write penetratingly about the great wave of Islamism that was to arrive on the shores of Western political consciousness. In Iran, greeted by revolutionary kitsch (posters saying ‘DOWN WITH U.S.A.’) under which families had their tea and cake, Naipaul writes, ‘What I had seen in the lobby of the Hyatt were the sad beginnings of a new middle class.’ In a different vein, Claudio Magris journeyed through cities and villages that live on the banks of the Danube which snakes past history and brutalities with little afterthought. In his writings, geography becomes a silent but omnipresent witness to life just as the USSR prepared to meet its deservedly humbling end. What marked both of these writers was an ear that willingly heard the superficial and a mind that teased out the animating historical and demographic forces that trembled beneath. But this is not just a writerly trick. Colin Thubron’s documentary film (from 1988) about his travels from Beijing to Kashgar in Xinjiang similarly brims over with premonitions about what is to come: a true clash of civilisations between Han Chinese and Turkic Uighurs—and in the final reckoning a permanent conflict between the furies of Mao and Mohammad.


What is one to make of a country where sentiments and loyalties shift with an alarming ease, often within days? This is not an Iranian phenomenon but rather an increasingly global trend. How must one write about such places, such societies where a permanent low-level agitation is always on and an agit-prop mindset is de facto rule?

For another set of travel writers such as the woefully under-read Marius Kociejowski or the grandees of the craft—William Least Heat-Moon, Lawrence Durrell or Patrick Leigh Fermor—they accumulate impressions, like the crow in Aesop’s fables, filling up their pitcher of imagination with scenes from everyday life, at the end of which flows the cool waters of description, often intimate and resonant, which slakes the reader’s thirst who then concludes that she ‘knows’ these places. This illusion of knowledge is a testament to the writer’s genius for evocation rather than any deep truth we may have gleaned as readers. In a way, I am reminded of what Ashis Nandy says about a generation or two of his contemporaries: ‘Malcolm Muggeridge once said that Indians are the only surviving English in the world. I would go further… . There are people here who can give you street directions in London without ever having been there.’ These type of travel writers peck away at details, collect them, architect a carapace of dialogues and observations, and eventually construct an image of a place that is indistinguishable from the story that one or the other set of natives tells us about themselves.

If we rely on this simple dichotomy, the former type of travel writer records his experiences which are often marinated in the politics of the day, while the latter makes assiduous efforts to sidestep that politics and goes in search of the phenomenology animating life itself. But in our times, both approaches get little play. What matters is the ability to attract eyeballs. All else is irrelevant or, worse, the plaything of the self-indulgent. The stories we tell about our present now need two opposing forces—the conscientious objector and the war monger, the reactionary and the liberal, and so on. Antipodes must coexist uneasily, so that the writer may offer stark relief and worship at the altar of that great intellectual god: nuance. It may all very well be true but such narratives are also invariably incomplete. It takes great effort to realise that most places—even ones as seemingly self-satisfied as the insides of a Swiss bank—are brimming with great personal dissatisfactions and apolitical strife and personal struggles. What makes writing, particularly travel writing, about complex places interesting is the worlds of the deeply religious, the pious, the fanatics, the clerical bureaucracies—the kind of people who live amid politics but have inner lives far removed from it. They fill the cavernous hollows of society with their blood and sweat, upon which the iridescent algae of intellectualisation can freely froth. For everyday lives to be rendered meaningfully, or for travel writing to aspire to become literature, one that is read well beyond the writer’s own lifespan, sentences must contain a steady trickle of portents gleaned from ordinary life. The didactism of intellectuals and glib summaries of soundbite warriors on the payroll—the staple of foreign journalists reporting in complex places—makes for good fishwrap and, worse, the dulling of the mind. To go past all this is hard work and demands that the writer become a craftsman of prose. But he must also publicly declare his premonitions, often at the risk of being wrong. Else, travel writing quickly devalues into a harmless stenography of the present. The writing that could have been subtle and radical becomes convenient and palatable for one’s own tribe, propped up by ‘likes’ and ‘retweets’, but is ultimately consigned to the labyrinths of a server’s database where the Minotaur of obscurity consumes all that comes its way.