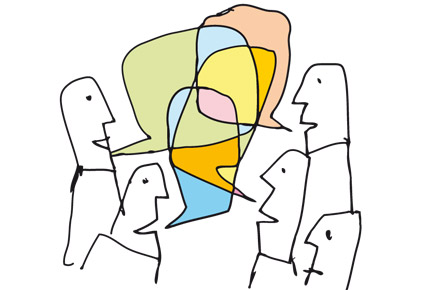 The need to communicate is intrinsic to life. Animals, big and small, talk in their own way. Some believe plants talk. Metaphysics apart, one of the fundamental blocks of civilization is conversation. Verbal communication in humans goes back to the earliest stages of our evolution. The journey from noises and grunts to a simple language possibly took several millennia. Perhaps sign language and semiotics was the first conversation among our ancestors. Initially it was just a manifestation of basic emotions; love, fear, anger, danger, joy and sadness. As languages developed, conversation became an important part of human lives. Every individual, family, community, and even regions have all since evolved their own form of talking and communicating.

While our conversation is to a large extent dependent on our relationship with the other person, there are several cross currents at play. A mother may speak with concern and joy, an elder may speak sternly, spouses tolerantly or irritably, siblings may quarrel, and friends may gossip. A politician speaks in rhetoric, a guru in parables, nations diplomatically. Pillow talk, quips, banter, repartee, wisecrack, crosstalk, threat, boast, diatribe; these are all a few among hundreds of ways we talk. Our mood, temperament, interest, passion and beliefs, and above all emotion, is the foundation of our conversations.

Technology has progressively changed the way we communicate. Have you noticed how the advent of mobile phones has altered your life? Interpersonal contact and public interaction are becoming virtual. Global connectivity and the internet have created a peculiar situation when even two individuals in immediate proximity often end up using one of the many messaging or social media apps. For the first time in history, actual conversation is under threat.

There are several scholars who have delved into the study of conversation. In 1975 the British psychologist and author Gordon Pask wrote about one such conversation theory. Pask says, “A conversation normally takes place in a contractual or normative framework. An individual agrees to participate in the conversation in order to learn about something. The two participants in a conversation represent the cognitive structures of knowledge and each has a different perspective and a role to play. The participants can be human beings, states, countries, cultures or even artificial intelligence machines, which are a special form of human-machine interaction.“ Since the spoken word is the bedrock of human civilization, people have honed their conversation skills continuously.

Various histories offer us accounts of the importance of verbal interaction. In fact, after the basic senses of taste, touch and smell, a child responds most to conversation even when he or she is not an active participant. Whether through words of endearment, cries for help, expressions of joy, paeans, laments, exaltations or speeches we connect to one another, individually or in groups, depending on how well the conversation flows. Most scriptures are based on the word of God. The oral tradition is the fountainhead of all folk literature. Society has always devised roles for people who have specialised in the art of conversation. Sages, gurus, courtiers, courtesans, performers, artistes, poets, storytellers, leaders and statesmen continue to use the spoken word to their advantage. The problem today is that words are spoken silently on a plethora of devices and platforms.

For thousands of years, Indian civilization was an oral society. Much of our culture and history was transmitted by word of mouth from one generation to another. Vedas, Puranas, and the two epics Ramayana and Mahabharata are essentially dialogues. Samvad (Dialogue) and Shastrartha (Debate) are essential parts of Hindu, Jain and Buddhist philosophy, while Semitic religions also feature conversation between God and his messengers (Prophets). Discussion and debate are important to human development as are enquiry and rhetoric. The change is that all this and more happens electronically.

While at times men have dominated public discourse, conversation is gender neutral. Many great public speakers and debaters have been women. Conversation has always been gender neutral and there are umpteen examples about the exemplary skills of women in this art. Ancient texts mention talks and discourse between various classes and communities. For centuries lovers’ talk, songs and odes have been synonymous with fine literature and art. The ancient Gurukul tradition of schooling has emphasised interpersonal communication too. Till date millions of people follow their gurus and spiritual leaders’ talks and lectures for guidance. India has always been full of such wise men. One can still go to an ashram or monastery in any part of the country and sit listening to the sages. TV evangelism has been a perennial favourite across the world. Large numbers of gurus and guides flourish on our TV sets even now.

One of the great delights of India through the ages has been conversation; from frivolous gossip to informed opinion. There was always time for family members to talk to and about one another. Nothing binds a family more than meal time chats. From the simple hearth of a primitive hut in a remote village to the opulent dining rooms of luxury apartments, most families consider dinner conversations sacrosanct. In spite of the rough and tumble of the fast paced 21st century nuclear families, I am happy that by and large most families at least meet for one meal and conversation. If families don’t talk, they become dysfunctional.

In a world where people spend up to five hours a day glued to their phones and perhaps more time watching TV or their computer screens, there is very little time left for real life interaction. The democratization of information, as well as anyone with a mobile phone (and there are four billion users) has the ability to initiate a debate or (mis)inform other individuals and groups that the entire conversation seems to be taking place in the cloud. News, politics, entertainment, socialising, relationships are all now triggered by messaging platforms.

In an article written a couple of years ago (and the malaise has gotten worse) writer Emma Seppala discusses the phenomenon of ‘phubbing”- social snubbing in favour of the tiny screen. She goes on to quote a study by Meredith David and James Robert, “My life has become a major distraction from my cell phone. Meredith David and James Roberts in the study further suggest, phubbing can lead to a decline in one of the most important relationships we can have as an adult: the one with our life partner. Phubbing also shapes our casual friendships. When someone’s eyes wander, we intuitively know what brain studies also show: The mind is wandering. We feel unheard, disrespected, disregarded.”  This is as evident while sitting in the family living room as in a public space like an airport lobby or college campus. We see people sitting together but staring at their phones or other devices.

Social media, especially messaging platforms and applications, is now where people engage with each other and the world. While more people than ever before are in touch with others, the number of face-to-face meetings has fallen by the wayside. Personal prejudices partisanship, fear, anger, alienation, love and hate, every response is entering in our conversation via TV debates and social media interaction.

Try and recollect the innumerable conversations you have had in your life. Your childhood prattle with your parents or the sweet nothings exchanged with friends. What about the arguments in the school bus? Or the chatter in the school canteen. The pleasures of discussing your first crush, your first victory or discussing the latest movie you saw. Holiday stories or return-to-school tales all are a part of our growing up. College is of course another conversation piece. You discover new worlds and independence. Of romance, friendships, career goals, political debates or just intellectual faffing. Every generation develops its own lingo. And who can forget those stealthy romantic interludes? Walks in the spring rain where soft whisperings intermingle with the pitter-patter of falling raindrops. Quiet tête-à-têtes over a shared cup of coffee. When was the last time you had a fireside chat?

I am sure we are missing out on lot in our lives. We just need to talk more often. Walk across the office, go down the hallway, hangout in the neighbourhood café or just pick up the phone. Talk. Listen and know others. You may find a happier person. With no fear of trolls.