Michelle Yeoh: ‘I hope there will be many more opportunities to tell stories like this’ 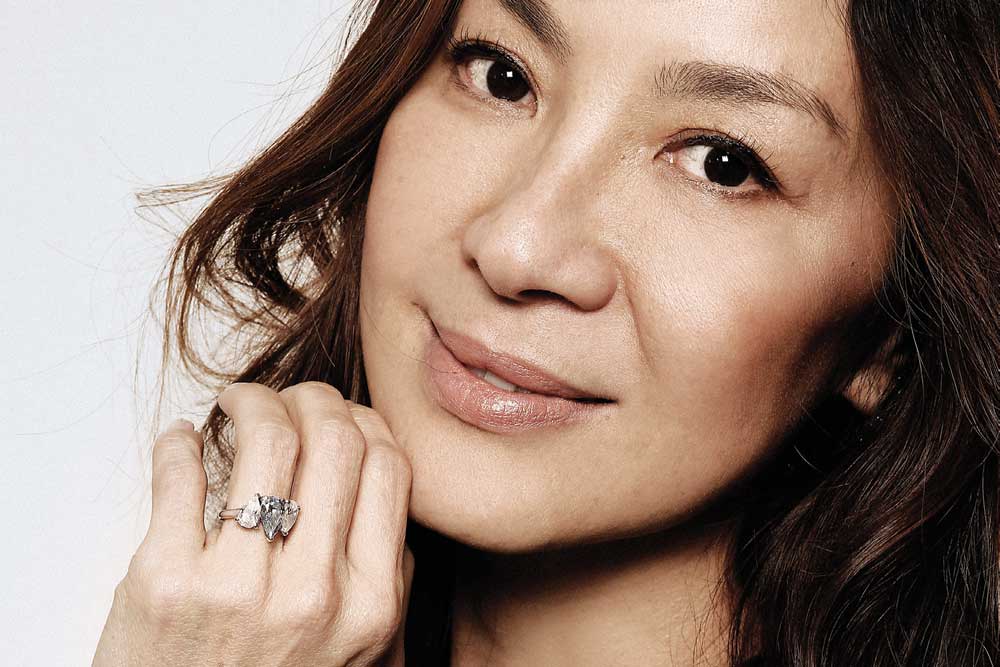 IT WAS IN November of 1993 when I saw the movie The Joy Luck Club (1993) which featured an all-Asian cast and, as far as I can remember, there has not been another movie since with an Asian cast till now. Warner Bros Pictures is releasing Crazy Rich Asians (2018) that showcases a very talented and handsome cast consisting of Asians from all parts of the globe. The movie is already causing a great amount of buzz. Michelle Yeoh—with whom we are all familiar from her roles in a James Bond movie, countless martial arts movies and Crouching Tiger, Hidden Dragon (2000)—plays the domineering, protective matriarch to the super-rich male lead. Born in Ipoh, Malaysia, on August 6th, 1962, she is a rare female action movie star in the industry. She spent her childhood winning a junior squash championship, doing ballet, playing table tennis and the piano, and diving.

What do you value about Crazy Rich Asians?

I like the fact that Jon Chu, the director, took a baseball and went ka pow! and hit all the stereotypes out of the ball park; I think it’s about time that it is all broken, you know, because as Asian- Americans and just Asians, we are very proud of our heritage and to be able to share it with the world—a leading man and woman who are Asian—I love it and we should see more and more of that, and this is a good opportunity which presents a lot of hope. And I hope there will be many more opportunities to tell stories like this.

When you say ‘stereotpical’ what do you mean?

Like when you are offered the part of a waitress from Chinatown or they have to explain why there is a Chinese character in the story or they’re Chinese take-out or something like that. The very old perception of what an Asian is.

After Crouching Tiger, Hidden Dragon what kinds of parts were you offered?

I think what is more significant [is that] even before I did Crouching Tiger, I acted in Tomorrow Never Dies (1997), a James Bond film. Everybody says that if you do a Bond film it will put you on the map, because those movies are seen all over the world and are very popular but I waited for two years and did not take on another role till Crouching Tiger, because the roles that came to me were the very stereotypical Chinese-Asian roles. And I felt if I accepted them, I would be endorsing that I agree with those representations of us. I would rather not work. I’m blessed that I can choose the roles I wish to play, but it is hard for an up-and-coming actress and they don’t always have the choice to be able to make these kinds of options in their lives, because they have to pay the rent and may have families to look after. I am single and fortunately my parents are well off, [so] that if I had to wait they would be willing to assist me, but then over the years what I have found is that you have to go and seek the roles—because one [difficult] thing is waiting for [a] role to fall into your lap. When Danny Boyle came to me with Sunshine (2007) and he wanted me to play the captain, I was the only Asian representation and I said ‘don’t you think that the future will be much more balanced, that we would have more Japanese and Chinese than just Russians and Americans up in space?’ So immediately it clicked and if you look at Sunshine, it was half Asian, a good balance of the mix. So sometimes we have to convince film- makers, storytellers that this is the right representation and don’t make us a token of being the right palette. Yes, we need the colours, so let’s put all the pieces together because it’s wrong and we have amazing stories to tell.

Taking a cue from the title, what does money mean to you?

Money means that you have more comfort, assurances that if you are ill and you need medical help, you will not be in a panic, but does it make you happier? Not necessarily. I think sometimes of my younger days where material things were important. But now as I grow older I think, what am I going to do with all that stuff? Money allows me to travel, to see the world, and I think I’ve worked hard enough where I can do it in a comfortable way, so I think money is about that.