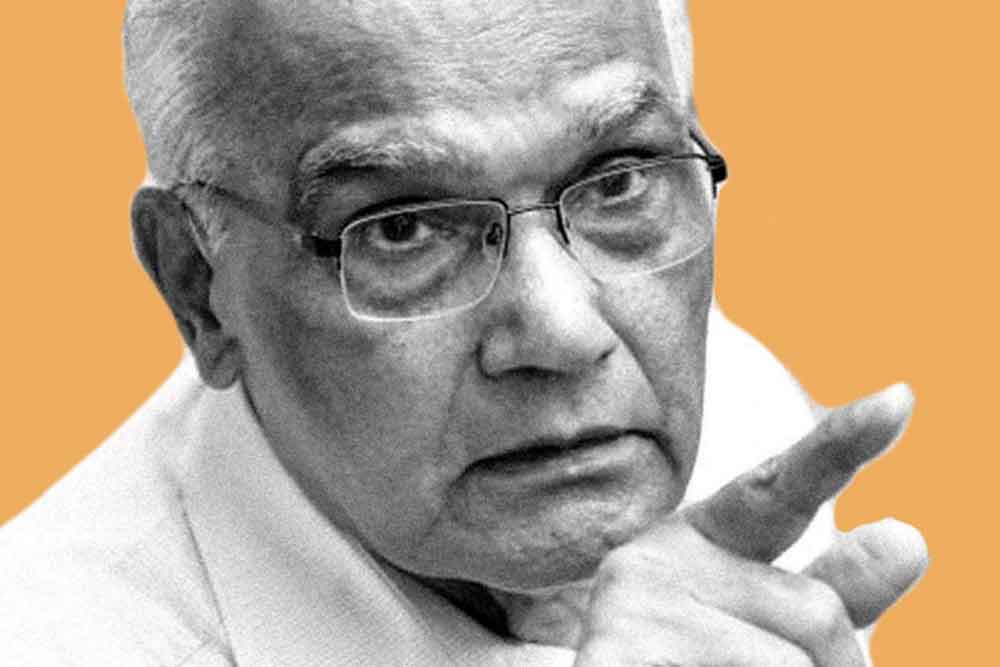 
Student: You said in our last class that VS Naipaul is so important because he helps us understand history—and what lies beneath and beyond it.

Teacher: Yes, in that sense, the philosophy of history, which creative writers can capture, is more important than run of the mill histories themselves.

Student: So, do you think that not just professional historians, but writers, too, get embroiled in the “history wars”?

Teacher: Without question. Think of Girish Karnad’s gratuitous attack on Naipaul at the Tata “Literature Live!” Festival in Mumbai, 10 years back.

Teacher: Naipaul was given a “Lifetime Achievement Award,” but he didn’t show up to receive it. Girish Karnad, who was invited to talk about his contribution to theatre in “Straight Talk,” instead, launched into a diatribe against Naipaul.

Student: Really? Just like that, out of the blue?

Teacher: He objected to Naipaul being given the “Lifetime Achievement Award.”

Teacher: Anil Dharker, the festival director, defending the award said, “We were all taken aback by Girish Karnad’s attack on VS Naipaul. After all, we had invited him [Karnad] to speak about his journey in theatre, and Mr Naipaul had nothing to do with that!”

Student: I can’t believe Karnad could’ve been so petty and mean!

Teacher: Nil nisi bonum. Karnad was a significant playwright, but hugely political, even if that was not how he was perceived. Like UR Ananthamurthy, he was involved in a bitter slugfest with SL Bhyrappa, probably the greatest living Kannada writer.

Student: And the fight was political, ideological?

Teacher: Undoubtedly. All kinds of historical events and figures, such as Vijayanagar Empire or Tipu, were at the heart of the fight. Karnad wrote a “pro-Tipu” play called Tipu Sultan Kanda Kanasu whose English version was called The Dreams of Tipu Sultan (1997).

Student: Does the play have a historical basis?

Teacher: Yes, a Persian manuscript, now in the India Office Library, London, purportedly written by Tipu Sultan himself. Tipu maintained a diary, where he both recorded and interpreted his dreams.

Teacher: There is actually a genre of dream writing in the Persio- Arabic tradition called khwabnama or dream stories. Dream analysis was already developed by the time of Ibn Sina (980-1037), the Transoxanian, or in modern terms, the Uzbek-Tajik, polymath.

Teacher: They are intriguing to read. The manuscript was translated by Mahmud Husain, a professor of History at the University of Karachi. Tipu recorded 37 of his dreams from 1785, when he was 34, to 1798, the year before his death. Most of the dreams suggest wish-fulfilment. In several, he is offered ethereally tasty food and drink. For example, in dream 28, Tipu is given three silver trays with delicious dates. This he interprets as getting three dominions—of the British, the Marathas, and the Nizam—on silver plate, as it were.

Student: What an extraordinary self-confidence or, should I say, self-delusion?

Teacher: Yes. Tragic, almost. Tipu wanted to drive out the British, defeat the “unbelievers,” and even place a person of his own choosing on the Delhi throne. He also had dreams of the Kaaba, the Prophet, and other Islamic sacred symbols and figures.

Student: And Karnad uses these dreams to show him a modern sort of person, a nationalist?

Teacher: Yes, that’s the idea. In 2015, Karnad even said that instead of naming the Bengaluru International Airport (BIAL) after Kempegowda, the founder of Bengaluru, it should be named after Tipu. Karnad argued that after all, Tipu was born in Devanahalli, where the airport is located. Predictably, riots broke out. Karnad had to apologise.

Student: So, Karnad’s play does not succeed in whitewashing Tipu?

Teacher: Whatever his play might show, the historical facts can’t be ignored. Even Tipu’s dream journal shows him to be an Islamist chieftain, constantly referring to the Hindus as “unbelievers”. He saw himself as a Ghazi, in the mould of a Muslim conqueror, converter of Hindus to Islam, and establisher of Muslim rule in the subcontinent.

Student: But his dreams did not come true?

Teacher: No. The British star was on the ascendant. Tipu was killed in the siege of Seringapatam or Srirangapatna on May 4, 1799. The Marathas and the Nizam of Hyderabad supported the British, the latter supplying 10 battalions, with some 16,000 cavalrymen. The British placed the Wodeyars from whom Hyder Ali, Tipu’s father had usurped power back on the Mysore throne.

Student: What is Bhyrappa’s take on Tipu?

Teacher: The book to read is Aavarana (2007), available in Sandeep Balakrishna’s 2014 English translation. It really blows the lid off the history and culture wars. It has a whole section on Tipu, even on his diary and his dreams. It presents the same material that Karnad had used a decade earlier in a totally different light.

Student: I must read it.

Teacher: Even the title, which means covering or concealing, is symbolic. It may even refer to the veil or purdah, as the cover of the translation suggests. But Bhyrappa clarifies in the very first line of his Preface: “The act of concealing truth is known as ‘aavarana’, and that of projecting untruth is called ‘vikshepa’.” Bhyrappa sets out to uncover the whole sordid ideological and institutional apparatus behind our history and culture wars. The book was sold out before it even came out—and then went into 10 reprints quite rapidly.

Student: What makes is so special?

Teacher: Its protagonist is a modern, rebellious Brahmin woman, Lakshmi, a Film and Television Institute of India graduate. She marries a Muslim filmmaker called Amir. She even converts to Islam, quite against her instincts and inclinations, changing her name to Razia. After all, religion doesn’t matter to her. But then, she finds that her husband’s family, even Amir himself, is not as liberal or open as she had assumed. And her secularist, “revolutionary” professor-mentor, LN Sastri, who has encouraged her, is actually a snake in disguise. With his free-thinking ways and English wife, he even hits on her. She rebels again, especially after Amir very dramatically proclaims, “A wife like you only deserves talaq. Talaq! Talaq! Talaq!” Later, her son, Nazir, also turns against his ancestral faith and its culture. Finally, she returns via her dead father’s legacy to Sanatana Dharma. That’s the story on the personal side.

Student: And on the professional?

Teacher: Lakshmi is supposed to help Amir in his government-funded project on “Tipu Sultan: A National Hero.” Instead, she also decides to do her own research on Vijayanagar, when she finds Professor Sastri’s account so skewed and ideologically motivated.

Student: Interesting! Like Naipaul, Vijayanagar is important to Bhyrappa.

Teacher: Yes, it becomes the fulcrum of Bhyrappa’s whole idea of history, which he says is the quest for truth.


Bhyrappa sets out to uncover the whole sordid ideological and institutional apparatus behind our history and culture wars. His book, Aavarana (2007), was sold out before it even came out—and then went into 10 reprints rapidly

Student: So, Bhyrappa, too, has a philosophy of history.

Teacher: As Razia-Lakshmi begins to sift through the material, rummaging through her father’s library, she finds the entire history of medieval India whitewashed, sanitised, and distorted to hide the genocide, plunder, and ravages of the Muslim invaders. She comes to the realisation that “History is not tied to slogans and ideals and reform movements. … The past reveals its true self to us through…books, signs, symbols and mutilated relics and yet we insist on seeing only a twisted version of it, because our eyes are jaundiced by the present.”

Student: She discovers the ideological pattern in the tapestry of historiography?

Teacher: Yes. She starts writing her own version of that history, but because no historian, including her own leftist mentor-molester, Professor Sastri, would ever accept it, she turns it into a novel, which even features Aurangzeb.

Student: So, it’s a novel within a novel.

Teacher: Quite self-reflexive and postmodern in a sense, but very grounded in revisionist historiography.

Student: What happens to Lakshmi and her novel?

Teacher: It is slammed by the secularists and the so-called revolutionary intellectuals. Bhyrappa even includes a review of Lakshmi’s novel in Aavarana.

Student: Do you think Bhyrappa was trying to forestall criticism of his own work?

Teacher: The book is peppered with references and has a lengthy list of sources at the end. These were times before the rise of the Bharatiya Janata Party (BJP). Bhyrappa didn’t want his book banned or himself jailed.

Student: The book must have attracted a lot of heat.

Teacher: Yes, it was quickly dubbed “communalist” by its detractors. In a sense, Bhyrappa was also typecast as an ideologue rather than as one of the greatest of India’s living writers.

Student: That is unfortunate.

Teacher: Aravind Adiga, Booker Prize winner and author of The White Tiger, wrote, “the term Aavarana now describes what has happened to SL Bhyrappa himself: swallowed by his weakest novel, passed over for the Jnanpith, and in danger of having a fanbase composed entirely of bigots.”

Student: Sounds like Adiga belongs to the other side!

Teacher: Hahaha! We’ll have to continue the conversation.