From bell to bell, the fight lasted a total of three minutes, a minute-and-a-half shorter than his entrance. Even those three minutes felt like a stretch 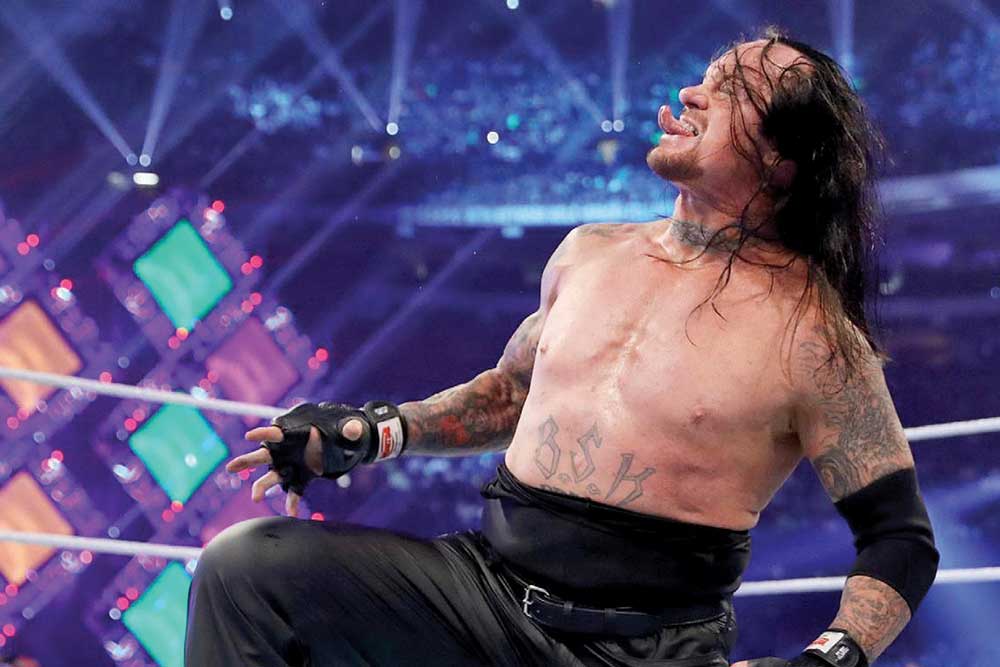 THE LIGHTS WENT out. The knell was struck. And through flames of dry ice (lit up by soft blue light), The Undertaker, pro-wrestling’s greatest gimmick, made his entry into pro-wrestling’s greatest stage—World Wrestling Entertainment’s annual pay-per-view, Wrestlemania, which rolled out its 34th edition on April 8th. For a major part of my existence (Wrestlemania and I were born a few days apart), this was the moment I looked forward to more than any other on live TV. Not just in anticipation of eventually watching a seven-foot man dressed like the grim reaper wrestle similarly outlandish characters; which, of course, was a sight to behold as well. The real draw to this moment— the moment when the arena turns dark and ’Taker waits behind the entry curtains—lay in his slow and long walk to the middle of the ring. It was a feast for the senses.

Through a haze of pealing bells and choir voices set to falsetto, he would appear, shadow-like; in a black trenchcoat and matching Stetson hat, perched atop a gush of curly black hair. Back in the 90s, the Stetson was pulled down to the bridge of his nose and his throat was wrapped in a grey wide- neck tie. But even in the 2000s, when the tie was replaced by a tattoo of his then-wife’s name inked below his voice box, The Undertaker’s visual appeal remained remarkably the same, thanks to the incredible props he made his entry with. Sometimes he walked behind a coffin-on-wheels, and once, during Wrestlemania IX, he even entered with a vulture. But mostly, it was with his trusted manager Paul Bearer, his pale and ghostly sidekick, who, in turn, walked in with a golden urn (according to WWE’s incredible storylines, the urn held the wrestler’s soul).

The schtick wouldn’t end even after he entered the ring, where the lights would begin to brighten as he peeled off his coat, one long arm at a time, and took off his hat. Now, and only now, the eerie music would stop, the arena’s bright bulbs shone and when they did, the broadcast cameras would focus on his eyes— white as milk, the black of his eyeballs embedded somewhere at the back of his skull. Mike Tyson, the most intimidating boxer the world has seen, once said that he won most of his bouts even before he threw his first punch. ’Taker’s pre-match routine was nothing but a personification of that intimidation, embellished to the point of perfection in the make-believe world of pro-wrestling.

Eras changed. Attitudes changed. And even the wrestlers changed (some of his contemporaries from the 90s even died, in real life). But The Undertaker, and his Dead Man Walk to the squared circle, remained an undying constant. Constant, though, is not always a good thing. On Sunday night, April 8th, at the SuperDome in New Orleans, US (Monday morning in India), when the lights went out and the gongs were sounded, it filled pro-wrestling fans around the world, including me, with dread—and not in the way ’Taker or WWE’s scriptwriters intended. For, in the last few years, the man stepping out of the dry ice hasn’t been Undertaker but a tired old man visibly fed up of his only trick. The hat and trenchcoat were still in place, the former barely concealing the wrinkles and jowls on his withered face and the latter unable to cover his sagging chest and bloated stomach, not even with the aid of darkness.

From the middle of the ring, John Cena—a younger, faster and stronger babyface—waited for Undertaker to complete his entrance, a walk so slow that one assumed it wasn’t due to the demands of his character but due to the demands of a battered, 53-year-old body. ‘Someone give him a walking stick already!’ wrote a fan on Twitter. Soon after the Dead Man took off his hat in the ring and revealed his hairline, another Tweet read: ‘My eyes! For the love of god or devil or whoever he prays to, stop for the sake of our childhood.’ It only got worse.

The match was a highlight reel of his trademark moves. From bell to bell, the fight lasted a total of three minutes, a minute-and-a-half shorter than his entrance. Even those three minutes felt like a stretch

The Undertaker hadn’t ‘competed’ since the previous Wrestlemania, where he had ‘lost’ (to new-age superstar Roman Reigns) only for the second time since 1993. Back then, in 2017, something remarkable occurred as he ducked under the ropes to leave the arena. On his way out, ’Taker left his hat and trenchcoat in the middle of the ring—a telltale sign that the bosses were finally doing what was long overdue—wiped tears from his eyes, waved goodbye to the crowd and disappeared behind the curtains, forever. Or so we thought.

Just like a great TV series that stretched its viewers’ patience in its final few seasons and even rolled out a finale, only to return as a movie (Entourage, for example), The Undertaker had yet again entered a Wrestlemania ring. Such moves—primarily driven by money—in the film industry tend to focus less on content and far more on inside jokes. It was the same case with The Undertaker’s return. The match was a highlight reel of his trademark moves, the wrestling equivalent of his greatest hits. From bell to bell, the fight lasted a total of 3 minutes, a minute-and-a-half shorter than his entrance. Even those 3 minutes, at times, felt like a stretch.

About a minute into the contest, ’Taker set up his Snake Eyes-Running Big Boot one-two. The idea is to throw his opponent, Cena in this case, face first into the turnbuckle (Snake Eyes) and as he ricochets and wobbles, The Undertaker will fell him with his shoe (Running Big Boot). Only, as ’Taker bounced off the ropes and painfully held out his leg, Cena had slipped to the ground before a semblance of contact. To cover up for the gaffe, the pair quickly assisted the old man to pull in his money shots—the Flying Clothesline, Old School (where he walks the top-rope) and one lethargic Chokeslam.

Now it was time for The Undertaker’s finishing move, but no pay-per-view match of his is complete with him Rising-From- The-Dead. So, Cena pinned him to the floor and mechanically ’Taker hoisted his upper torso 90 degrees, one creaking spine bone at a time. The misery was over instantly, as the Tombstone Piledriver (the best finishing move, in its heyday) was conducted and the Dead Man got up on his feet to his theme music and dimmed lights. “The ’Taker has returned to New Orleans, known for its cultural voodoo, to exorcise some bad juju,” the WWE commentator said, killing any stray hope of a permanent retirement. “He has righted the wrong here at the SuperDome.” Allow me to explain.

Sometime in the mid-2000s, it came to the attention of WWE’s bosses that their scriptwriters had, wholly by chance, allowed The Undertaker to go undefeated in Wrestlemanias. The faux pas was renamed The Streak and repositioned as a money-spinner. And year after long year, The Undertaker was brought back to headline and win at Wrestlemania. In 2014, however, Brock Lesnar—a real-life powerhouse returning to the WWE after a long sabbatical—had to be promoted and ’Taker’s streak was sacrificed, at the SuperDome in New Orleans (hence, the juju). Back then, it was a hard pill to swallow for us fans—witnessing live the killing of a great character. But we realised it was the right move for the business, given how jaded the routine was becoming.

But The Undertaker returned the year after that, in Wrestlemania 2015, and again in 2016—defeating jobbers (pro-wrestling speak for those who routinely lose matches) on both occasions. Then, in 2017, after his loss to Reigns, his second defeat in four years, we, the fans, and perhaps even The Undertaker, were certain that they had finally killed off the Dead Man for good. But his gimmick is built around returning from the dead. And this time when the lights went out and the knell was sounded he did so literally, looking rather zombie-like.