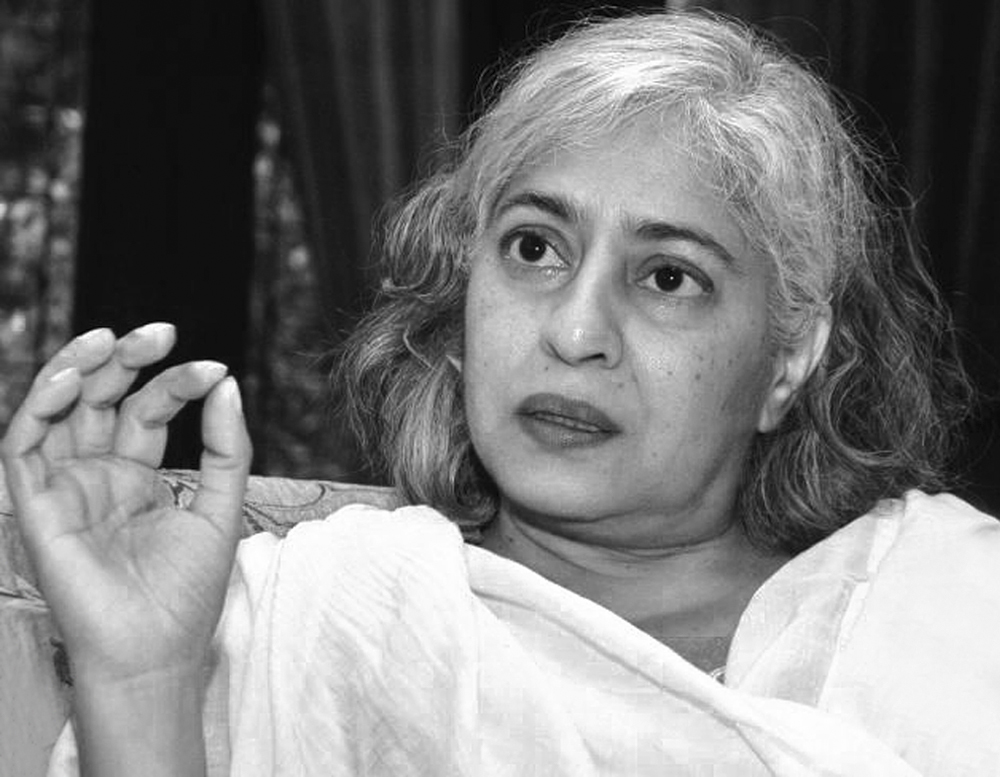 An alumnus of the University of Cambridge, Dr Radha Kumar’s specialisations include ethnic conflicts, peace studies and conflict resolution. She had served as an interlocutor appointed by the Government for Jammu and Kashmir from 2010 to 2011, and has worked in various parts of the world to bring peace to troubled areas. The 66-year-old author, feminist and academic has held coveted positions in India and abroad. She was director of the Mandela Centre for Peace and Conflict Studies at Jamia Millia Islamia University, senior fellow in peace and conflict studies at the Council on Foreign Relations, New York, executive director at the Helsinki Citizen’s Assembly, Prague, and associate fellow at the Institute for War and Peace Studies at Columbia University. Associated with the Stockholm International Peace Research Institute and the Council of the United Nations University, Kumar has worked briefly, along with others, in restoring normalcy in Kashmir and has travelled to all 22 districts in the former state that is now bifurcated into two Union Territories. Kumar, the author of Paradise at War: A Political History of Kashmir, spoke to Ullekh NP about the recent moves by the Centre on the region and the plight of the people of Jammu and Kashmir. Edited excerpts:

A conservative scholar recently said to me, “Article 370 had become like an inflamed and infected appendix. It had to be removed.” What do you think of this justification from some quarters that the special provisions for Jammu and Kashmir were anti-women, anti-lower caste and anti-minority?

I have never understood why we are so prone to use medical metaphors when we are so unhealthy! Jokes apart, official figures show that lower castes and scheduled tribes are better off in J&K than in most other parts of the country. Until the insurgency began, minorities were also reasonably well treated. The exodus of Pandits under threat from militants was a shockingly anti-minority act that has yet to be remedied, neither UPA nor NDA did so, nor did the Modi administration. The property restrictions on children of women who have married non-state subjects were, I thought, struck down by the Supreme Court. On many other indicators, women of the state are better off than in other parts of the country.

The Kashmir issue attracts global attention also because India and Pakistan, two contenders to its territory, are nuclear-armed neighbours. Why is it that Islamabad would want to internationalise the dispute while New Delhi wants it to be treated as a bilateral issue? What are the advantages that India has/had in restricting it to an affair involving India and Pakistan?

Pakistan had early success at the UN on Kashmir because of British duplicity at the UN, at a time when Britain was very influential there. They had some success again in 1965 and 1971 and the issue again gained some international traction due to the Indian and Pakistani nuclear tests. While India is not in the Security Council and China is, we can be sure that the issue will be revisited every time there is a possible threat to regional security. Given the constant efforts to disrupt J&K and Indian security by Pakistan-supported militant groups, the threat will not disappear. We do not have such overwhelming military superiority over Pakistan to end their support for anti-India militant groups. Despite all the propaganda surrounding Balakot, it is unclear whether it acted as a deterrent. Pakistan’s response to our Government’s recent moves indicates we will see redoubled efforts at infiltration and recruitment and weaponisation of militants.

Were there international efforts that went against India’s interests in the past? Even VK Krishna Menon’s marathon speech, in hindsight, is considered an attempt in vain to win over world sympathy for India’s cause on Kashmir. What went wrong historically with India’s efforts to take the matter to global fora?

Historically speaking, we could have gained traction internationally if we had joined the Atlantic bloc at the same time as taking Kashmir to the UN. Our leaders failed to understand that staying out would lead the Great Powers within the Security Council—Britain, the US and France—to consider us dispensable, whereas Britain’s push was that Pakistan should be supported irrespective of the rights and wrongs of the issue, because the Pakistani leadership would be more likely to support the Atlantic bloc. For different reasons, Russia, too, was cautious in their support though they did use their veto power in our favour during Indira’s time (since she brought us closer to the Communist bloc). After the Cold War ended, this situation changed, and both PV Narasimha Rao and Manmohan Singh’s economic policies put us on a growth path that led India to become far more important globally. The present Government, however, appears to have misread the situation—just as NDA 1’s nuclear tests brought the US down on us, the threat of renewed India-Pakistan conflict over Kashmir has also brought international attention and anxiety back to us.

How do you assess the way Congress leaders right from Pandit Nehru to Manmohan Singh managed the Kashmir issue? Nehru had talked about Article 370 in the 1960s. Was Article 370 designed to erode over time? Why did successive Congress governments, too, feel it wise to dilute its provisions over the decades?

Article 370 was negotiated by Nehru, Patel and Gopalaswamy Ayyangar for the Maharaja of J&K and Sheikh Abdullah. It was the best that could be achieved in terms of codifying the Instrument of Accession in the Indian Constitution and it still took four years for the same provisions to be inserted in the J&K Constitution. India’s founding fathers must have hoped it would be overtaken by merger, as other Indian princely states did, but the J&K legislators have not till date wanted merger. The dilutions to Article 370 were issue-by-issue and many were achieved through the concurrence of the elected government or legislators. Some changes were felt to beneficial—for example, the extension of the Election Commission or broadening of the Supreme Court’s purview or harmonising specific customs duties. PM Manmohan Singh, during the peace process years, negotiated a framework agreement with Pakistan through a back channel that sought to extend self-governance of a limited extent offered under 370 to all of the former princely state.

What are the key errors various rulers of India have made that led to deterioration of the situation in the Valley?

All the key errors can be categorised as attempts to interfere in the ‘internal autonomy’, to use the phrase used by the J&K Constituent Assembly, whether the arrest of Sheikh Abdullah in 1953 or the continuous toppling of state governments, or attempts to rig the 1987 elections or being slow to move into a post-conflict stage on the ground, not to mention the recent moves to replace Article 370 with a new version, demote the state and divide it, all while putting the state under lockdown. Of course, Pakistan’s constant cross-border infiltration and support for militancy have often put their own pressures on policymakers in Delhi.

Do you agree with Prime Minister Narendra Modi’s assertion that it was primarily Article 370 that contributed to the rise of separatism in the Valley?

No. I think that aspirations for internal self-rule underlay both the Maharaja’s and Abdullah’s insistence that the relationship between the state and Union be limited to the terms of the IoA (Instrument of Accession), and Article 370 was a consequence of that. It was the erosions of 370 that led to the rise of separatism (and perhaps allowed Pakistan to gain a foothold in the Valley). The idea that 370 bred a shoal of separatist politicians is a shocking accusation given how many Kashmiri politicians and cadre of regional political parties have been killed by militants. Pushing them into the same camp as separatists who demand Pakistan or independence is pushing more people towards secessionism.


As someone who, besides being an expert on Kashmir, was also involved in efforts to restore peace in the state, as a person who has travelled to all 22 districts there, are you anxious about the support the BJP’s latest move on Kashmir received from many members of the opposition?

Yes. I think the opposition is no longer an opposition and that is dangerous for a democracy. But I fear the widespread popular support in the rest of India for these moves equally or even more. Millions of people in J&K have had their lives fundamentally altered while they are in lockdown—that this does not cause popular outrage is extremely alarming for our democracy. We appear to have stopped questioning the Government, even when they take draconian measures, which means we have relinquished the most important safeguard of democracy.

What are the key changes in Government policy towards Kashmir since Modi came to power in 2014 notwithstanding his party’s alliance with a so-called separatist party, PDP?

Well, let’s see. A far more hardline approach towards militancy, including stone-throwers, towards dissident or pro-Azadi groups such as the Hurriyat, a general attitude—often loudly proclaimed—that the Union Government knows better than the elected state government what the people of the state need and want, ‘no talks’ with dissidents, grouping elected legislators and regional political parties together with separatists, years of Governor’s and President’s rule in a situation of relative peace, and now, of course, the revocation of Article 370 and Union Territory status along with a division. A complete U-turn on previous government policies of talks, confidence-building measures and improvement in political space and (to some extent) human rights. All that has gone, replaced by diktat.

What has the BJP/RSS done to the people of Kashmir? Where do you think the Sangh’s ‘solution’ for Kashmir is headed to? How different was Vajpayee’s approach to the issue?

Are there international parallels to what the present government is doing in Kashmir?

There are dozens, I am sorry to say, both past and ongoing. China’s actions in Hong Kong compare to some extent, but more widely the world today has seen rising trends of chauvinism and xenophobia, especially in relation to immigration and minorities.