In the age of Donald Trump, virtually every day has become a vivid reminder of how tribalistic American society has become 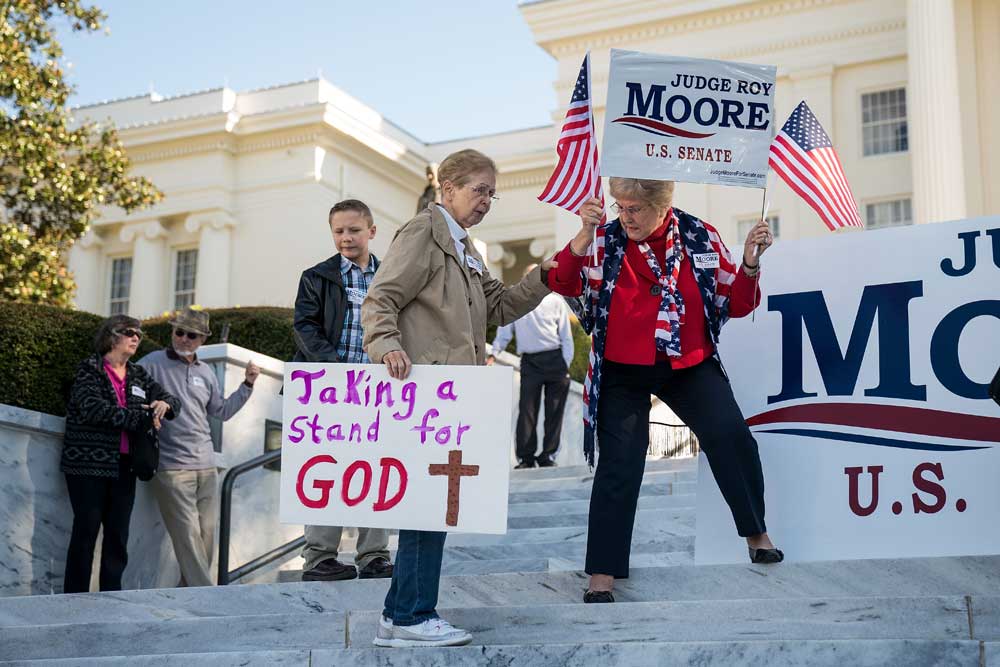 Perhaps the most glaring – and galling – example is the continued equivocations of some Republicans in the wake of allegations that Alabama Senate candidate and Christian fundamentalist may be a serial pedophile. Republicans in Washington have become increasingly louder in their calls for Moore to quit, but their denunciations coincided with the growing possibility that Moore would lose to a Democrat – an almost unthinkable possibility in deeply conservative Alabama.

Moore has refused to step down, and Alabama officials have concocted every defense, including likening Moore to Joseph, the father of Jesus. Even if Moore wins (a very likely possibility, given the Republicans’ herd mentality), it’s likely to hasten the GOP’s implosion and its retreat from credible governance.

For now, however, the Republicans are still trying to figure out what reality to embrace. The one that tells them to dig in and support Moore, and be rewarded by donors; or the one in which they will likely get demolished in elections over the next few years (like what happened in Virginia recently), fading from relevance in moderate and more educated parts of the country. As Alabama political columnist Kyle Whitmore lamented, “Alabama is killing itself, suicide by Roy Moore.”

The star-like collapse of the GOP, and the decline of intellectual conservatism in America, would be amusing for liberals if we weren’t also witnessing the continued aimless wandering of the Democrats and the left. While their level of tribalism hasn’t reached the right’s, the left is also increasingly siloed. And their isolation from the mainstream, masked somewhat by the recent elections and Democratic wins, is also unnerving.

Many of the left’s divisions have been glossed over as the magnifying glass has turned to the right’s civil war. But there has been an increasingly vocal group of leftists in America that is eschewing common cause and pragmatism for a nihilistic approach – all in the name of attacking “oppression.” While oppression in America exists for millions, dismantling it has always involved working coalitions and a rejection of litmus tests.

Alas, litmus tests on the left have become the norm. Take, for example, the recent battles in California over the state’s history textbooks. A loosely put together group of activists calling themselves South Asian Histories For All tried to torpedo the state’s adoption of the textbooks, first by calling for a delay in approval, and then alleging wrongdoing by the State Board of Education. All of this was because the activists thought depictions of Hinduism were too positive.

They urged the State Board to remove any reference to Hinduism, and tried to push edits that would have implied that Hinduism is the single source of oppression in South Asia. Rather than try to work towards a more pluralistic solution that balances various community sensitivities with historical accuracy, these activists have urged any attempts to incorporate a more positive understanding of Hinduism as tantamount to Hindutva.

While this wouldn’t be a shock coming from far-left activists, what’s more surprising is the number of credible South Asian organizations that backed SAFHA’s efforts. Progressive groups like Sadhana: the Coalition of Progressive Hindus, for example, were persuaded into endorsing SAFHA, even if it meant that Hinduism might be presented in the most regressive and caricatured means possible. The willingness of left-leaning Desis to buy into nonsense and the canard of Hindutva is troubling, especially given how elements of the community seem to be re-litigating battles from the subcontinent without any clear rationale.

Then again, given the support Roy Moore is getting from conservatives, we should probably not be too surprised that nihilism and submission to nonsense extends to both ends of the ideological spectrum.

While we may at some point return to the dominance of the ideological center, and a sustainable segment of the population open to critical thinking, the herd mentality seems to be winning the day at the moment. That’s disheartening for democracy, even as both the far right and far left hold court in their echo chambers and “safe spaces.”